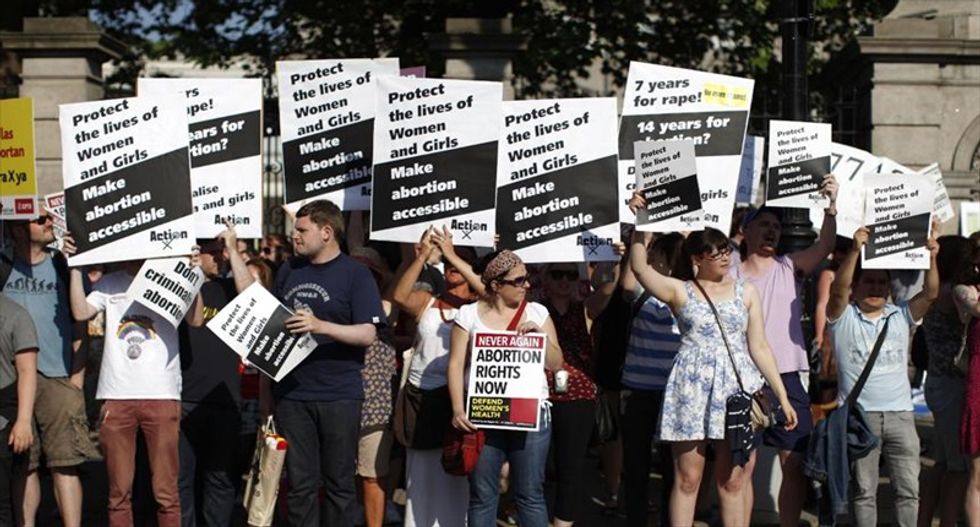 Pro-Choice supporters demonstrate outside the Irish Parliament building in Dublin on July 10, 2013. Photo by Peter Muhly for Agence France-Presse.

Despite requests from the woman's family for her to be allowed to die, doctors continued life support as the Irish constitution says a woman and her unborn child have an equal right to life.

The woman was 14 weeks pregnant when she was declared clinically dead on Dec. 3 after suffering a brain injury. She has been on life support since but is "deteriorating rapidly", the court heard.

The case touched on a deeply divisive issue in Ireland, which has a controversial constitutional ban on abortion, with even the head of the Catholic Church in the country saying, "A woman isn't simply an incubator."

The high court's judgement accepted medical evidence that the fetus has "no realistic prospect of emerging alive" and that only legal uncertainty had brought the case to this point.

"To maintain and continue the present somatic support for the mother would deprive her of dignity in death and subject her father, her partner and her young children to unimaginable distress," the judgement said.

It described continuing medical treatment as "a futile exercise which commenced only because of fears held by medical specialists of potential legal consequences".

The case reignited fierce social tensions in majority Catholic Ireland over the rights of unborn children, prompting the Archbishop of Dublin Diarmuid Martin to speak out on the issue.

"From the point of view of Catholic teaching in general medical ethics, there is no obligation to use extraordinary means to maintain a life," Martin told Newstalk radio. "A woman isn't simply an incubator."

In a statement following the judgement, the Irish health service welcomed the judgement and expressed "deepest sympathy to the family... in the tragic and extremely difficult situation they have found themselves in."

But experts said similar cases could emerge in the future due to the broad language of the eighth amendment to the Irish constitution.

Though intended to outlaw abortion, the wording of the amendment does not refer specifically to termination and affords equal rights to a woman and her unborn child "as far as practicable".

"The (court's) decision was based on the absence of a realistic prospect of a live birth," Conor O'Mahony, a senior lecturer in constitutional law at University College Cork wrote in an analysis of the judgement.

"As long as the eighth amendment remains in the constitution in its present form, the possibility of such a deeply tragic and private case being decided in the very public and distressing surroundings of the courts will be present."

The broad wording of the law has also been blamed for causing confusion in emergency situations in the past.

Earlier this month, Health Minister Leo Varadkar said the constitutional rules around abortion are "too restrictive" and have a "chilling effect" on doctors.

"Difficult decisions that should be made by women and their doctors, a couple or next-of-kin... on the basis of best clinical practice, are now often made on foot of legal advice. That is not how it should be."

A series of protests have demanded the amendment be repealed, but Prime Minister Enda Kenny has ruled out a referendum before the next general election, which is due in 2016.

In 2013, after another divisive debate and a supreme court ruling, Dublin introduced new laws allowing for terminations in limited circumstances if the life of the mother was at risk.

It followed the death of 31-year-old Indian dentist Savita Halappanavar in a Galway hospital in October 2012, in a case that generated global attention.

Halappanavar had sought a termination when told she was miscarrying, but the request was refused as the fetus was alive and her life appeared not to be in danger. She died of blood poisoning days after miscarrying.