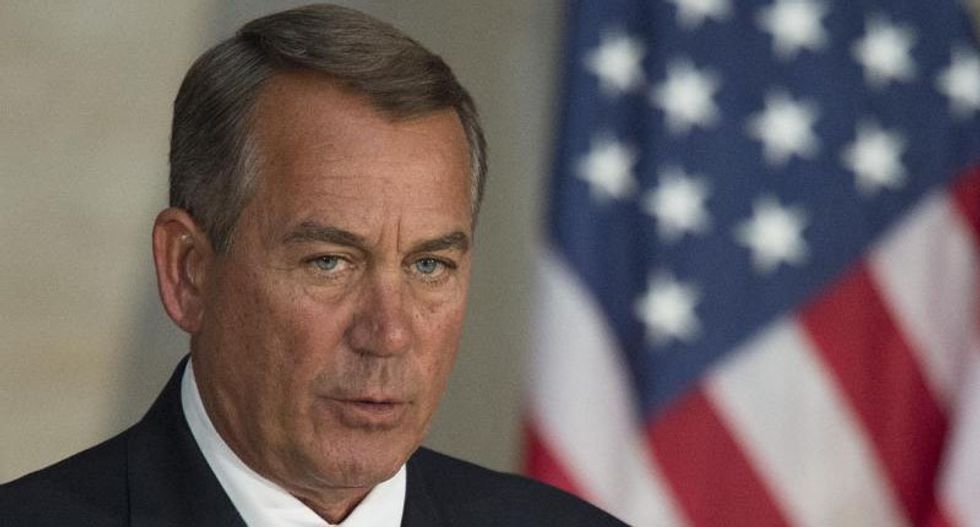 House of Representatives Speaker John Boehner will try to sell fellow Republicans this week on a government spending bill that avoids a shutdown fight but allows the party to strike back at President Barack Obama's immigration order.

Republicans have a lot riding on their handling of must-pass government funding. Having scored huge wins in Nov. 4 voting that handed them a majority in the Senate and gave them a bigger majority in the House, Republican leaders want to demonstrate that they can govern responsibly next year.

But many are still outraged that Obama bypassed Congress and is moving ahead unilaterally on immigration, granting what they claim is "amnesty" to people who came to the United States illegally.

House Republicans will meet on Tuesday after a 10-day Thanksgiving break to discuss their response, including a leading option for Boehner that would fund most government agencies through September 2015, with only a short-term extension for the Department of Homeland Security (DHS).

House Republican lawmakers and aides say this would give them a chance to use their stronger House and Senate majorities next year to pass explicit spending restrictions on some DHS agencies, to try to stop Obama's immigration overhaul.

"That’s an option. There are a lot of options. That’s one of them so we’ll see," House Appropriations Committee Chairman Hal Rogers told Reuters after a closed-door meeting of senior Republicans on Monday. Rogers is pressing for a full-year spending bill for all agencies.

Representative Marlin Stutzman, a Republican from Indiana, said he supports the idea of short-term funding for DHS because it would allow Republicans some leverage over Obama next year on immigration, while avoiding a shutdown fight.

"A short-term CR (continuing resolution) on DHS would give us flexibility," he said. "I think we need to have some ability to go back to the table."

Senate Republicans are discussing similar proposals for a two-tier spending bill. Congress must pass a funding extension by Dec. 11 to avoid a government shutdown. Obama's immigration order lifts the threat of deportation for some 4.7 million undocumented immigrants.

But opinions vary widely in Boehner's Republican caucus, and he may have difficulty persuading conservatives who are demanding an immediate retaliatory vote against Obama's order.

"I just want to make sure that we do our job and that is to make sure no funds can be spent for this illegal action," said Representative Matt Salmon, a conservative from Arizona who is pushing for a full-year spending bill with language explicitly blocking the use of any funds to pay for Obama's immigration order.

Still others, such as Kansas conservative Tim Huelskamp, want a short-term funding extension for all agencies, so that Republicans have a stronger negotiating position with Obama when they control both chambers of Congress.