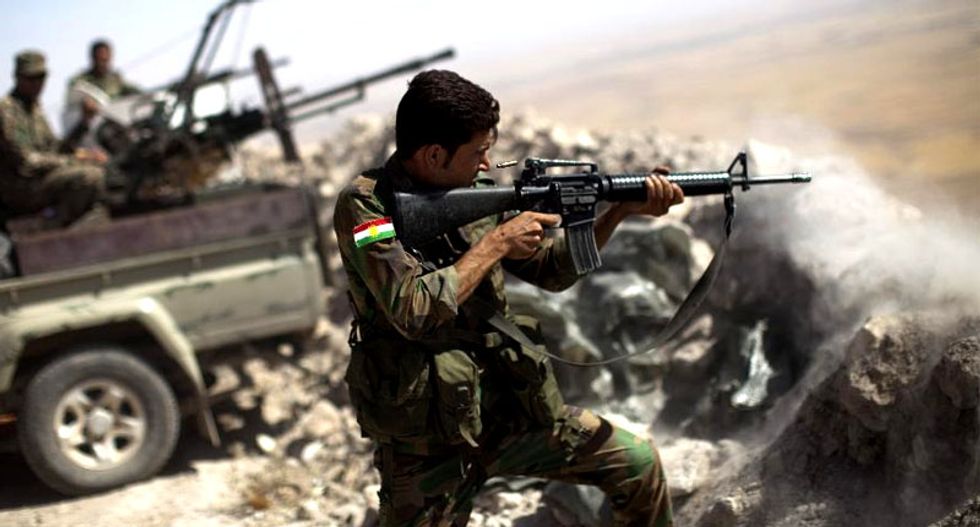 US Secretary of State John Kerry welcomed any Iranian military action against Islamic State jihadists in Iraq as "positive" after the Pentagon said Tehran had carried out air strikes against the group.

Kerry, hosting a meeting of an anti-IS coalition in Brussels, said international air strikes were finally stopping the advance of the jihadists across Iraq and Syria, but said it could take years to defeat them.

A top US military officer, General David Rodriquez, also warned that IS had set up training camps in eastern Libya, although he said they were not an immediate target as activity there was "very small".

Kerry told the Brussels meeting of officials from 60 states in the coalition that a campaign of around 1,000 strikes had made a "significant" impact on the Sunni extremist IS group, which declared a caliphate across parts of Syria and Iraq in June.

"Our commitment will most likely be measured in years," he told the meeting at NATO headquarters, adding that the partners would "engage in this campaign for as long as it takes to prevail".

But, in a sign of the deepening complexity of the regional conflagration, Syria's Iranian-backed President Bashar al-Assad criticised the Western and Arab air strikes for having no effect.

Kerry denied there was any military coordination with Iran after the Pentagon said that Iranian F-4 Phantom jets -- acquired from the United States before the 1979 Islamic revolution -- had deployed against IS fighters in Iraq's eastern Diyala province.

He suggested, however, that there was an understanding between mainly Shiite Iran and the US to tackle a common threat.

"If Iran is taking on (IS jihadists) in some particular place... and it has an impact, then it's going to be net effect (that) is positive," Kerry told a press conference after the meeting.

In Washington, US defence officials said the Iranian air raids were part of a pattern in which Iranian or American military advisers have carved out separate spheres in Iraq.

"There's a tacit understanding we're not going to operate in the same space. And they're not targeting American forces," a defence official, who spoke on condition of anonymity, told AFP.

The coalition issued a statement saying that the militant group's "advance across Syria and into Iraq is being halted," and that Iraqi and Kurdish forces were reclaiming territory.

They also agreed to develop a "multifaceted" strategy to combat the IS group, including stopping the flow of foreign fighters, cutting finance and "delegitimisation" of its powerful, social media-driven brand.

Kerry is due Thursday to attend the Organization for Security and Cooperation in Europe's ministerial meeting in Basel, Switzerland, which will focus on international terrorism and the Ukraine crisis.

EU justice ministers will also meet separately in Brussels to discuss ways of improving the legal battle against jihadists.

The United States launched its first strikes against IS in Iraq in August. In late September the strikes were extended to IS targets in Syria, involving the United States as well as a number of allies.

Saudi Arabia, the United Arab Emirates, Jordan and Bahrain are taking part in the air strikes in Syria. Australia, Belgium, Britain, Canada, Denmark, France and the Netherlands are participating in Iraq.

But Syria's Assad -- whose main backers are Tehran and Moscow -- hit out at the Western powers that had until months ago been focused on his removal from power in a civil war that has killed around 200,000 people.

"You can't end terrorism with aerial strikes. Troops on the ground that know the land and can react are essential," he said in this week's edition of French magazine Paris Match.

"That is why there haven't been any tangible results in the two months of strikes led by the coalition. They would of course have helped had they been serious and efficient."

The US has carried out the vast majority of the strikes against IS, which is estimated to number around 30,000 jihadists and is accused of atrocities including rape, crucifixion and the beheading of Western hostages.

The Syrian conflict has created a constantly shifting patchwork of regional alliances, the most unlikely being that of Washington and Tehran.

Iranian forces have been active on the ground in Iraq assisting Shiite militia and Baghdad government units, but this was the first time the United States had said the Iranian air force was taking part.

Tehran refused to confirm or deny the air strikes against IS.

"There has been no change to Iran's policy to provide support and advice to Iraqi officials in the fight against (IS)," foreign ministry spokeswoman Marzieh Afkham said.