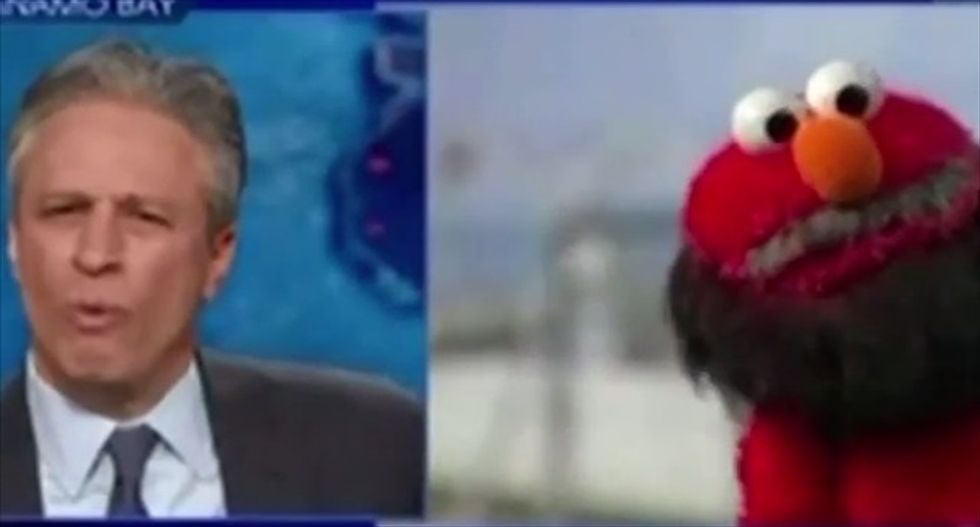 Daily Show host Jon Stewart's got a visit from his friend "Gitmo," the Guantanamo prison detainee, to debate the objections from Republican Senators Ted Cruz (R-TX) and Marco Rubio (R-FL) to the possibility of more cooperation between the U.S. and Cuba.

"Surely, you must take solace in Senator Rubio and Cruz's discussion of American values," Stewart said to Gitmo.

"Sure, as long as the moral relativism of their position is sincere, and not a pander to a powerful ex-pat Cuban community in an intent to gain an edge on Florida's 29 swing-state electoral votes," Gitmo responded.

"God, Gitmo, what is wrong with you?" Stewart asked. "That is so cynical."

"Gitmo sorry," the host's puppet friend said, sheepishly. "Gitmo should have more faith in the system."

Rubio and Cruz have criticized President Barack Obama for announcing his plan to normalize relations between the two countries, saying it would tighten the Castro brothers' regime over the country. Cruz, in particular, accused Cuba of "torturing," which took Stewart aback.

"I don't know what you two guys have been doing for the last couple of weeks," Stewart said, as an image of the Senate report on the CIA's torture of detainees appeared on the screen. "But I think I know which book I'm getting you for the holidays."

As a detainee himself, Gitmo told Stewart he had been taking part in a hunger strike at Guantanamo. But Stewart had to inform him that the prison is American, despite being located in Cuba.

"Brain get cloudy after 10 years," Gitmo admitted. "What was Gitmo charged with, again?"

"Charged with?" Stewart said, drawing a blank. "Funny story -- we haven't actually gotten around to it. It could be worse; some of our other offshore detainees got food tubes in their rectums."

"Gitmo dream of food tube in rectum," Gitmo lamented. "Has to be better than man's arm."

Stewart also criticized Sony Pictures for cancelling the release of the film The Interview, a satirical depiction of an assassination attempt against North Korean leader Kim Jong-un. U.S. officials reportedly said on Wednesday that North Korean officials were linked to the hacker group, "Guardians of Peace," that threatened Sony with violence against moviegoers following a major cyber-attack last month.

"I don't even know why you're so mad at Hollywood," Stewart said of Kim. "You should love them. Hollywood's just like North Korea -- everyone's always telling you how great you are, there are billboards everywhere with your face on them, and no one eats."

Watch Stewart's discussion with Gitmo, as posted online on Thursday, below.

"That's it? So Kim Jong-un gets to decide what movies we make?" before complaining that every movie from now on will end up being World's Biggest Penis: The Motion