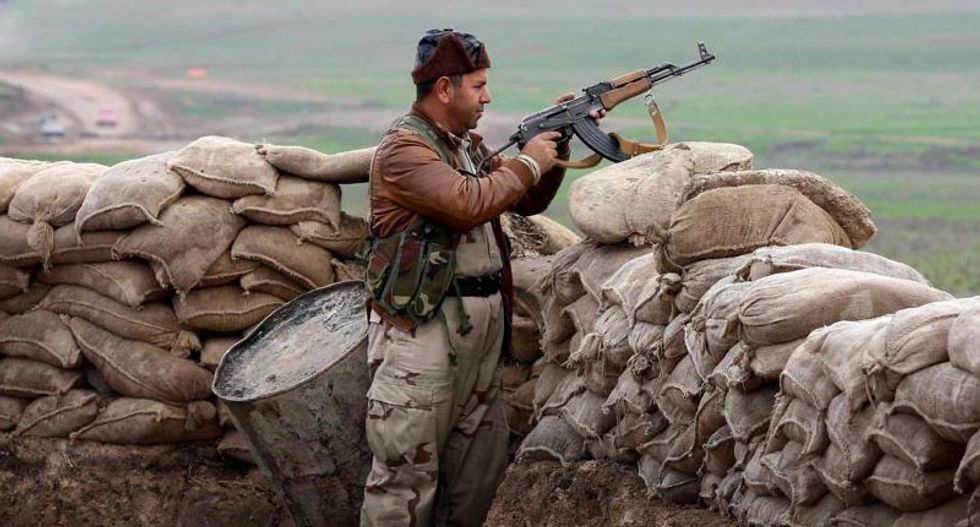 A Kurdish Peshmerga fighter stands behind sandbags at a checkpoint in Zummar city in the northern Iraqi governorate of Nineveh, on December 18, 2014 (AFP Photo/Safin Hamed)

Kurdish forces pressed their biggest offensive against the Islamic State group so far Friday, buoyed by US reports that jihadist supremo Abu Bakr al-Baghdadi's top aide in Iraq has been killed.

Kurdish peshmerga forces were securing the surroundings of Mount Sinjar after breaking a months-old jihadist siege of the northwestern region while fighting was also reported near the city of Tall Afar further east.

The Pentagon said Thursday that US strikes had killed several top leaders of the group that proclaimed a "caliphate" straddling Syria and Iraq six months ago and rose to be the world's most feared jihadist organisation.

US officials said among those killed was Abu Muslim al-Turkmani, who was Baghdadi's deputy in charge of Iraq and would be the most senior IS leader to fall this year.

Kirby said strikes against the group's leadership were disrupting the jihadists' "ability to command and control current operations against" Iraqi federal and Kurdish forces.

The leaders of autonomous Kurdistan described the operation they have spearheaded since Wednesday as the most successful so far against the jihadists.

After the US-led coalition paved the way with some 50 air strikes, around 8,000 peshmerga reclaimed some 700 square kilometres (270 square miles) in the Zumar and Sinjar regions in two days.

Late Thursday, they reached Mount Sinjar, where thousands of fighters and civilians from the Yazidi minority had been besieged for months.

"The peshmerga have liberated around 70 percent of the areas around Mount Sinjar, but the southern part of the Sinjar region is still under IS control," said Faisal Saleh, a Yazidi stranded on the mountain with his family.

"The peshmerga are currently offering assistance to those who need it the most and they are planning to take them to Kurdistan but that hasn't happened yet," he told AFP by telephone.

Most of the displaced civilians still atop the mountain were from a nearby village called Sinuni, and peshmerga forces were escorting them there.

"We're clearing areas north of Mount Sinjar and not facing any resistance. Our forces are now about one kilometre from Sinuni," the peshmerga commander on the mountain, Ashty Kojar, said.

A Yazidi fighter on Sinjar said earlier he could see retreating IS fighters blow up houses in Sinuni and Khan as-Sur.

In August, Mount Sinjar saw one of the most dramatic episodes of the six-month-old conflict in Iraq when tens of thousands of Yazidis were trapped there without food nor water.

Fears of a genocide against the small Kurdish-speaking minority were one of the reasons US President Barack Obama put forward for starting an air war against the jihadists.

The peshmerga also closed in on Tall Afar, a large city from which huge numbers of Shiite Turkmen were displaced when IS attacked in June.

"There is continuous shelling by the peshmerga. It is likely they will move a bit closer," said one Tall Afar official, adding that the Kurdish troops were 13 kilometres (eight miles) north of the city.

Residents said the Iraqi army's elite counter-terrorism unit -- known as the Golden Brigade -- was also involved in operations around the city.

"There's fighting going on, it started last night. I can hear shooting and explosions not that far away even as we speak. I can sometimes hear fighter jets," said Abu Hussein, a 26-year-old who was a teacher before the jihadist offensive.

"Where I live, in the Kasek neighbourhood of Tall Afar, I can see many IS members preparing to flee the city," he said.

According to a US military statement, two of the five air strikes by coalition warplanes on Thursday targeted IS vehicles near Tall Afar.

The Iraqi portion of the jihadists' caliphate has shrunk in recent weeks, with central government troops and Shiite militia making significant gains in the east of the country and south of Baghdad.

Kurdish officers have said the latest peshmerga-led operation forced many IS militants to seek refuge across the Syria border or in their main hub of Mosul, Iraq's second city, around which they have been building berms and trenches.

'Can't possibly be random': Former FBI official reacts to news that he was being subjected to rare IRS audit

The New York Times reported on Wednesday that former top FBI officials James Comey and Andrew McCabe were both hit with extremely rare "random" IRS audits after they fell out of favor with former President Donald Trump.

McCabe appeared on CNN Thursday and said that he'd be shocked if it were a coincidence that both he and Comey just happened to be subjected to the same rigorous tax audit.

A young American woman will be allowed to plead not guilty to murder on the grounds her victim sexually abused her, according to a decision issued by a US judge Wednesday in a closely watched case.

In June 2018, then-17-year-old Chrystul Kizer allegedly killed 34-year-old Randall Volar at his home in Kenosha, Wisconsin before setting his house on fire and driving away in his car.