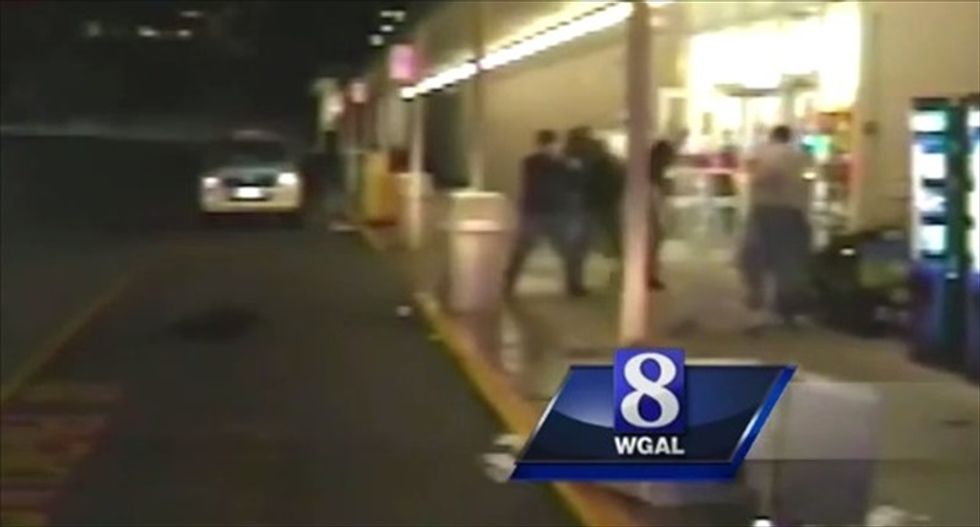 An $8 million federal civil rights lawsuit accused two Pennsylvania police officers of failing to help a suspect who was dying after being shot at least 16 times, the the York Dispatch reported.

"We tried," one officer says. The other replies, "Oh, we certainly tried. We did the [baton], we did the Taser, there was nothing we could do."

The lawsuit states that Schultz lay on the ground for five minutes before dying without receiving any medical assistance.

"You can see [Schultz] after the shooting," attorney Devon Jacob told WGAL-TV. "He raises [his] right arm, put it down. You can hear him moaning. Nobody is doing anything to attend to Mr. Schultz."

The December 2012 shooting happened following Schultz's arrest for shoplifting. The video shows Schultz, who was carrying a butter knife and a pair of scissors, on the ground while being hit by a baton by one of the officers. Schultz refuses to comply with the order. Officers also used a Taser on Schultz during the encounter.

"We don't want to hurt you," an officer can be heard saying. "Drop the knife."

Instead, Schultz gets up and can be seen approaching the officers, who shoot and hit him at least 5 times. But according to the lawsuit, York County District Attorney Tom Kearney failed to report that Schultz turned away from police before being hit by a volley of 11 shots. One of those shots reportedly perforated Schultz's heart.

Kearney, who called the allegation of a cover-up "balderdash," told the Dispatch that there are times when police are justified in shooting someone in the back.

"People flinch, they turn, cops are in different locations," he said. "The location of bullet wounds is but one factor in [my] determination as to whether officers acted appropriately."

Jacob said that, while the officers were justified in shooting Schultz as he approached them, there was less of an "imminent threat" to their safety when Schultz turned away, saying he was "basically contained."

"Granted, he didn't put the knife down," Jacob said. But there was nothing that required them to fire again. Basically, there was a standoff at that point. They have him at gunpoint."

Watch WGAL's report on the lawsuit, as aired on Thursday, below.