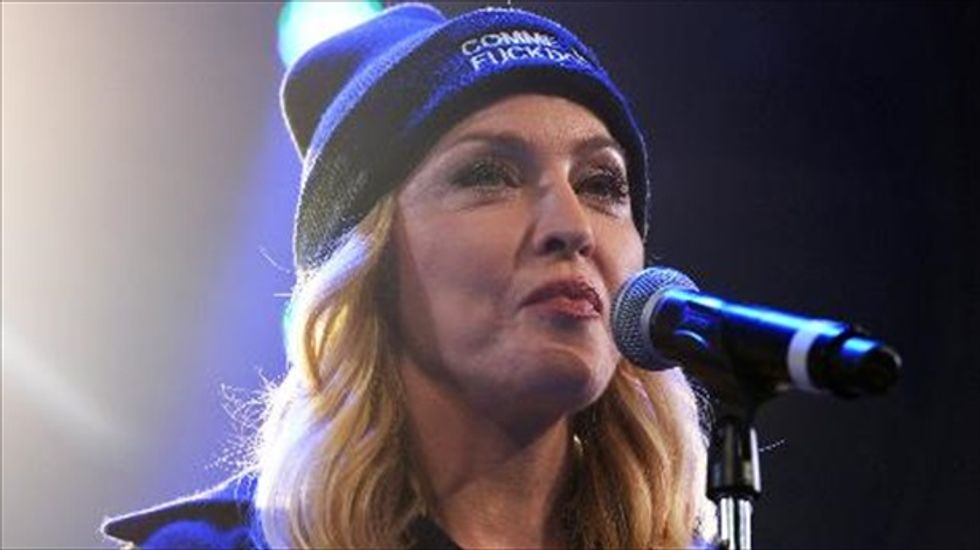 Madonna speaks onstage at the at Barclays Center on Feb. 5, 2014 in New York City[AFP]

Madonna and Sony Pictures both were separately torpedoed by major hacks this month, in what the pop icon called "crazy times."

"Shit, this is the age that we're living in. It's crazy," she told Billboard magazine, when asked about the investigation into how at least 10 of her unfinished, unreleased songs were leaked onto the Internet.

"I mean, look at what's going on with Sony Pictures. It's just the age that we're living in. It's crazy times."

Washington accuses Pyongyang of being behind the hack at Sony that led to the release of embarrassing emails and caused executives to halt the debut of the madcap comedy action film "The Interview."

The film about a fictional CIA plot to kill the country's leader infuriated North Korea, although Pyongyang has repeatedly denied it was behind the cyber-assault on Sony.

"The Internet is as constructive and helpful in bringing people together as it is in doing dangerous things and hurting people. It's a double-edged sword," Madonna said.

Asked about her recording security, she said it already had been quite tight, so the leak came as a surprise.

"We don't put things up on servers anymore. Everything we work on, if we work on computers, we're not on WiFi, we're not on the Internet, we don't work in a way where anybody can access the information," she said.

"Hard drives of music are hand-carried to people. We don't leave music laying around."

President Barack Obama said that while his administration was planning a "proportionate" response, the hack of Sony was an act of "cyber vandalism" rather than war.

North Korea has called for a joint probe into the investigation with the United States into the hacking -- an offer swiftly rebuffed by security officials in Washington.

Pyongyang threatened to hit back at the White House and other US targets if it was sanctioned over the alleged hacking.