Malaysian PM criticized for golfing with Obama while 118,000 residents are displaced in massive floods 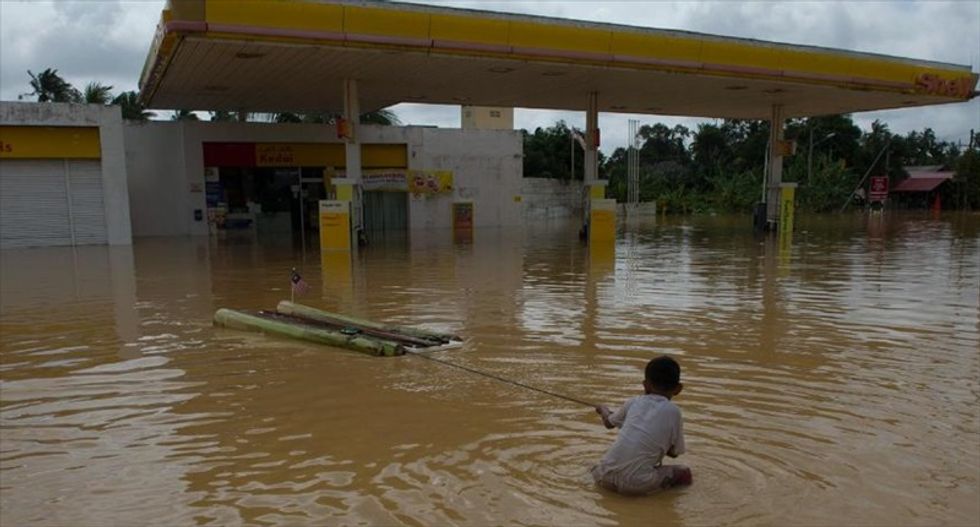 A boy plays in floodwaters near a petrol station in Pengkalan Chepa, near Kota Bharu on Dec. 26, 2014 [AFP]

Malaysia's worst flooding in decades forced some 118,000 people to flee as premier Najib Razak came under fire after photos showed him golfing with U.S. President Barack Obama during the storms.

At least five people have been killed by the rising waters and there appeared little respite on the way on Friday, with forecasters predicting further heavy rainfall across previously unaffected southern parts of the country.

As local media carried photographs of people wading through flood waters as deep as two meters (6.5 feet) and entire houses submerged by rising water, the government faced criticism for not declaring a state of emergency to help devastated communities.

Seasonal flooding hits Malaysia every year and regularly forces tens of thousands from their homes, but the latest round has forced authorities to evacuate around 118,000, mostly in the north-east, state news agency Bernama reported.

Among the dead was a man who drowned at a relief centre on Christmas eve, while a rescue boat carrying eight people including a young couple went missing after it became entrapped in a whirlpool and capsized, the news agency said.

Rising flood water has rendered several roads unusable and authorities have suspended train services in some of the worst-affected areas. Communications have also been badly hit by the storms.

In a rare piece of positive news, around 100 tourists who were stranded in a remote resort in central Malaysia's Mutiara Taman Negara Resort were rescued and sent to a relief centre.

Najib himself came under fire, however, when photos emerged of the premier playing golf with Obama in Hawaii, with Malaysians questioning why he was not at home to deal with the crisis in posts on his official Facebook page.

Critics have also charged his government with failing to respond quickly enough, with some lambasting the authorities for not declaring a state of emergency in the worst-hit regions.

"The PM needs time to take a break," Deputy Prime Minister Muhyiddin Yassin was quoted as saying by the New Straits Times.

"He has been working very hard so let's be fair to him as a human being. Don't worry, I'm in charge."

Yassin also insisted the government had responded appropriately to the flooding, telling the newspaper: "We face floods every year but this is looking to be the worst the country has seen in the last 30 years."

"Unless there was a total breakdown in electricity or water supply, or if the number of evacuees rises to over hundreds of thousands, we will not declare a state of emergency."

Amid rising criticism, the government said Friday Najib had decided to cut short his usual year-end vacation and return to Malaysia on Saturday to oversee rescue operations.

He is expected to land in Kelantan, one of the most severely-hit states, and meet people affected by the crisis as well as discuss new measures with authorities to help flood victims.

"I am deeply concerned by the floods. I feel for the people who have lost their homes, and the families who have lost loved ones," Najib said in a statement.

"I want to see the situation for myself and be with the people."

Meanwhile, the Malaysian Meteorological Department warned of a heavy downpour over the next few days in parts of the country that have so far been spared the worst of the flooding, including the southern state of Johor, which neighbours Singapore.

Residents there have been cautioned to prepare for possible massive floods. Heavy rain on Friday morning had already resulted in over 200 being evacuated to relief centres.

Some states and districts across Malaysia have decided to cancel their New Year celebration plans as a mark of respect for flood victims.