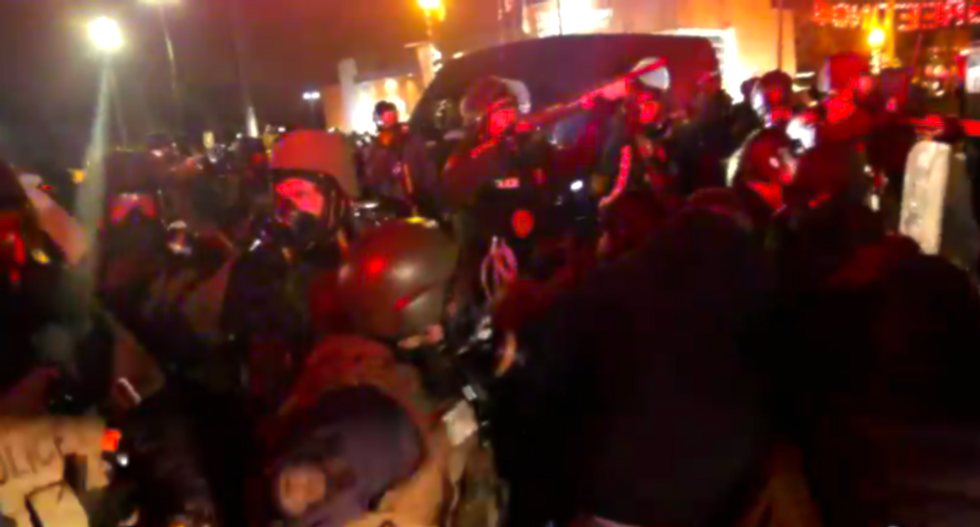 The mayor of the US city at the center of a deadly police shooting that sparked repeated nights of racially charged unrest pledged Sunday to rebuild.

Looting erupted and businesses were set ablaze in the St Louis suburb of Ferguson after a grand jury on November 24 said white police officer Darren Wilson would face no criminal case in the shooting of 18-year-old Michael Brown, who was black.

Sporadic protests continued across the US on Sunday.

"We are recommitted to rebuilding the city and to once again becoming a thriving community for economic development and residential stability," Ferguson Mayor James Knowles said at a news conference.

"We are working hard with local and regional partners to reestablish resources available," he added.

The decision not to charge Wilson in connection with the August 9 shooting of Brown touched off days of sporadic violence in Ferguson, as well as demonstrations in several major cities across the United States. Ferguson was also hit by violent unrest in the weeks after the shooting.

Protesters have shot at police, robbed locally owned stores and set cars and buildings ablaze. A church attended by Brown's family was burned down.

On Sunday. football players for the St Louis Rams apparently joined the fray, raising their arms in a "hands up, don't shoot" gesture as they walked onto the field before the game began.

The five players included Tavon Austin, Stedman Bailey, Kenny Britt, Chris Givens, and Jared Cook, US media said. After the team scored a touchdown, Britt and another player, Tre Mason, again raised their arms in apparent solidarity with the protesters.

On Saturday, Wilson resigned from the Ferguson police department, citing fears for the safety of local residents and fellow police officers.

Some residents have also made repeated calls for the police Chief Thomas Jackson to step down.

"It's impossible for this community to move forward with him still in that role," local St Louis politician Antonio French told ABC News.

In a brief statement Sunday, Jackson again reiterated that he had no intention of resigning.

The mayor also unveiled plans and incentives to increase the racial mix of the police department, which is overwhelmingly white, even though Ferguson has a predominantly black population.