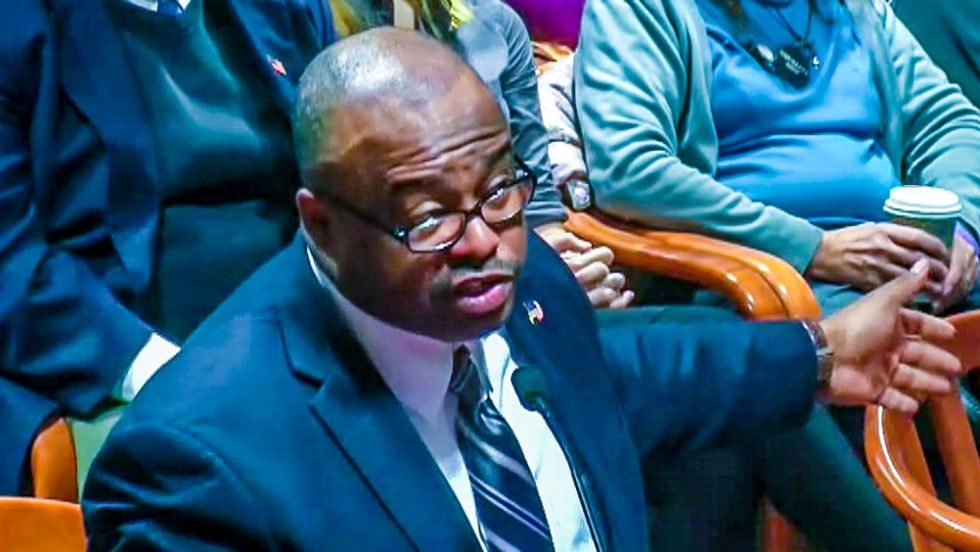 A bill to extend anti-discrimination protections in the Michigan's civil rights law was tabled on Wednesday after lawmakers heard testimony about whether or not LGBT people deserved to be considered a protected class.

Republican state Rep. Frank Foster, the bill's lead sponsor, urged members of the Michigan House Commerce Committee to "check your politics at the door on this one and do what is right for the state."

“We are competing in a global market," he pointed out. "We are competing against other states that already have this type of legislation, some as far back as the 1970s.”

Democratic State Rep. Sam Singh also pushed for a separate bill which would have added "gender identity and expression" to the state's Elliott-Larsen Civil Rights Act. Singh's bill was backed by a coalition of large businesses, many of which already had policies forbidding discrimination based on sexual orientation and gender identity.

But witnesses like Christian Coalition chairman Keith den Hollander argued that the legislation was solving a non-existent problem, and that very few LGBT people complained about discrimination in the workplace.

Pastor Stacy Swimp testified that it was offensive to compare LGBT rights to the civil rights movement.

"This proposed legislation is yet another step in the assault on religious freedom," Swimp opined. "I asked the Commerce Committee today, can you truly define sexual orientation? Do you truly know what you are potentially aligning yourselves with?"

"There's a comparison between the homosexual allegation of gay rights and black civil rights," he continued. "And as a minister of the Gospel, and as a black American whose parents participated in the Freedom Rides -- my ancestors were slaves in plantations in the state of South Carolina, Arkansas, Tennessee, Indiana and Mississippi -- I stand here today rather offended."

"I ask, has anyone from the LGBT community ever had to stand up or step off of the sidewalk whenever a straight person walked by? Lesbian, homosexual, bisexual, and transgender Americans have never been denied their voting rights, nor have they been denied the right to assemble. No one from the LGBT community has ever had fire hoses turned on them by the police department, they have never had to drink out of an LGBT water fountain. There is no record of LGBT -- homosexuals, lesbians being forced to sit at the back of the bus in an LGBT section."

Swimp argued that LGBT Americans already enjoyed a higher annual median income and employment rate than that of African-Americans.

"Therefore, the Commerce Committee should not consider voting out of committee and sending to the House floor a bill that would grant special privileges, guarantee special protections, or grant special status to a group -- or in this case, the LGBTQ community -- based solely on their choice of sexual behavior," the pastor said.

At the conclusion of Swimp's testimony, Foster pointed out that it was wrong to imply that Americans did not face discrimination because of their sexual orientation.

"If you don't think the LGBT community has been discriminated against, been drug behind cars, been hung up by their necks to they're dead, been denied housing, been denied commerce opportunities then you're just not looking very far," Foster observed.

"Can you cite one legal case in which a homosexual, a lesbian has been subject to discrimination and denied housing -- supported by the public policy -- potentially discriminated against, and set at the back of the restaurant?" Swimp asked.

"Did you listen to the ACLU's testimony? Because I'll be happy to bring them back up again," Foster replied.

"I just want to remind you of the lynching of Matthew Shepard," state Rep. Henry Yanez (D) said to applause.

But in the end, the GOP-controlled committee granted Swimp's wish, and declined to vote on either bill, citing a lack of support.

Watch the video below from the Michigan House of Representatives, broadcast Dec. 4, 2014.