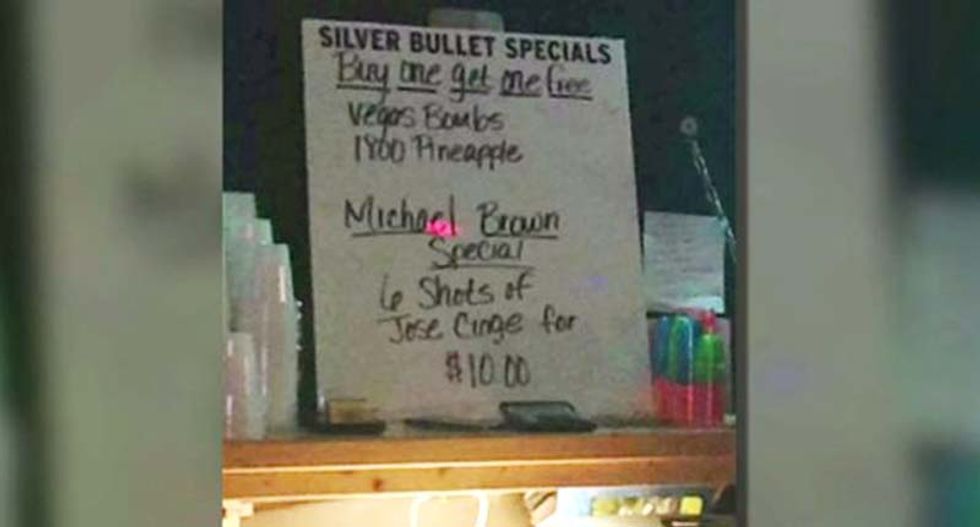 A St. Joseph, Missouri bar is under fire after the owner jokingly promoted a "Michael Brown" drink special, offering 6 shots for $10, reports Fox 4.

Mug Shots, a bar that advertises itself as a place “Where sarcasm is always free,” is taking heat after people on social media posted pictures of the hand-lettered sign in the bar's window reading "Michael Brown Special - 6 shots of Jose Cinge for $10."

The '6 shots' is in reference to the number of times unarmed African-American teen Michael Brown was hit by bullets fired by Ferguson police officer Darren Wilson.

A co-owner of the bar, Rodney Stapleton, admitted that he got the idea after seeing another bar that posted a similar special on their Facebook page, saying it looked like they got a good response.

“It looked like it was getting a good response so I just decided to use it here,” he said. “That’s what bar owners do if they find something works at another bar they try to use it at their bar.”

Now he says, it was a poor decision.

“It’s not meant to cause any harm," he admitted. "I should have thought a little bit more about it before I made it a shot special.”

Protestors stood in front the bar Saturday night holding signs criticizing the promotion, with the owner posting a new offer in the window poking fun at himself.

"The owner of Mug Shots is an *sshole shot special, 6 Jose Cinge shots for $12."

Watch the video below from Fox 4: