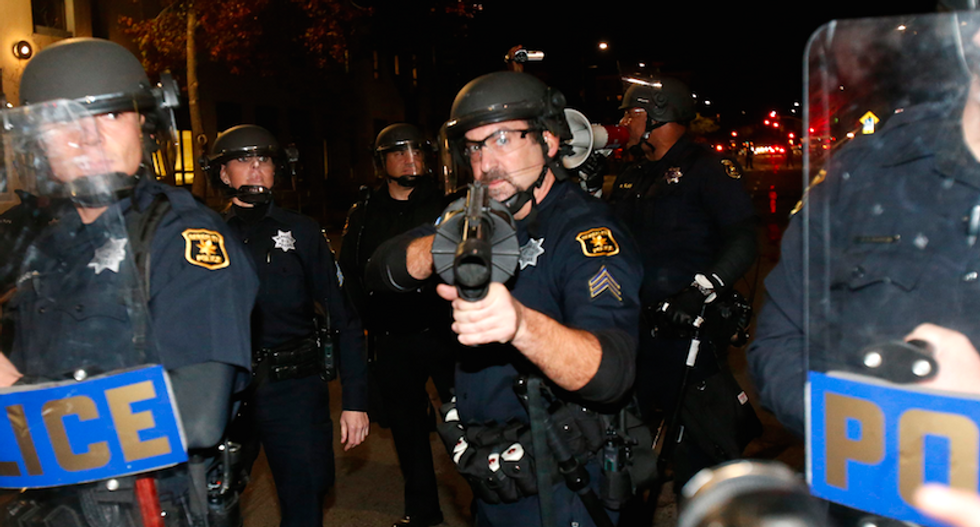 A police officer aims his weapon towards protesters during a march against the New York City grand jury decision to not indict in the death of Eric Garner in Berkeley, California December 8, 2014. (REUTERS/Stephen Lam)

More than 150 protesters were arrested in California overnight after shutting down a major freeway in another outbreak of nationwide demonstrations against police use of deadly force on minorities.

Across the other side of the country late on Monday, basketball stars in New York including Cleveland Cavaliers forward LeBron James joined the protests by wearing shirts emblazoned with "I can't breathe" -- the last words of Eric Garner, a black man who died after a police chokehold.

Hundreds of demonstrators gathered outside the Barclays Center in Brooklyn, where Prince William and his wife, Kate, watched the Cavaliers face the Brooklyn Nets.

Large crowds have demonstrated daily in several U.S. cities since a grand jury decided last week not to bring criminal charges against a white police officer over the death of Garner, an unarmed father of six, in July.

The death of Garner and the police shooting of Michael Brown, an unarmed black teen in Ferguson, Missouri in August, have highlighted strained relations between police and black Americans and rekindled a national debate over race relations.

Several hundred people stormed onto Interstate 80 in the college town of Berkeley near San Francisco on Monday night snarling traffic in both directions.

Protesters threw rocks and other objects at officers, California Highway Patrol spokesman Daniel Hill said. More than 150 people were arrested, mostly for resisting or obstructing an officer, he added.

Earlier, dozens of protesters stopped an Amtrak train in the town by lying on the tracks or sitting on a sofa placed across the line.

Outside the Barclays Center in Brooklyn, a group of about 300 protesters blocked streets and chanted, "I can't breathe," in memory of Garner, and "Hands up, don't shoot," a reference to Brown's death.

In downtown Phoenix, about 200 protesters marched to police headquarters over the killing of another unarmed black man by a white officer in what authorities described as a struggle last week.

Protesters demanded that police release the name of the officer involved in the fatal shooting of 34-year-old Rumain Brisbon, a man police suspected of selling drugs.

New York State Attorney General Eric Schneiderman on Monday said he was seeking the power to investigate all police killings of unarmed civilians in the state.

It remained unclear whether New York Governor Andrew Cuomo would grant Schneiderman such powers. Like the Democratic mayor of New York, Cuomo has tried to walk a fine line -- expressing concern about the grand jury's decision not to charge an officer in Garner's death while not alienating the police.

On Monday U.S. Attorney General Eric Holder, whose office is investigating the Garner case, announced changes to federal law enforcement guidelines intended to set an example for local police, according to a Justice Department official.

In Cleveland, Samaria Rice, the mother of a 12-year-old African-American boy shot dead by police in November, told reporters she was seeking a conviction.

Her son, Tamir Rice, was shot near a recreation center while carrying a pellet gun that was a replica of a real gun. The boy's family has filed a federal civil rights lawsuit against the city and the two officers involved, one who shot Rice on Nov. 22 and one who was driving the police car.

"Tamir was a bright child, he had a promising future and he was very talented in all sports: soccer, basketball, football," Rice said. "He was my baby."