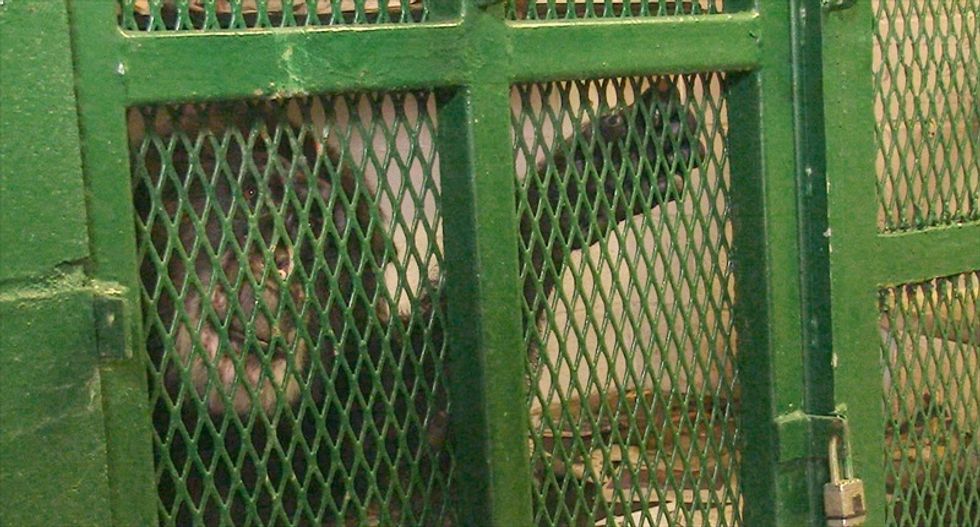 Tommy, a 26-year-old chimp who lives alone in a shed in upstate New York in this undated photo. REUTERS/Pennebaker Hegedus Films, Inc.

In the first case of its kind, a New York appeals court rejected on Thursday an animal rights advocate's bid to extend "legal personhood" to chimpanzees, saying the primates are incapable of bearing the responsibilities that come with having legal rights.

A five-judge panel of the Albany court said attorney Steven Wise had shown that Tommy, a 26-year-old chimp who lives alone in a shed in upstate New York, was an autonomous creature, but that it was not possible for him to understand the social contract that binds humans together.

Wise said that he would ask the Court of Appeals, New York state's top court, to hear the case.

"This is just the first appellate decision in a long-term strategic campaign" to win rights for chimps and other intelligent animals, he said.

Wise, representing The Nonhuman Rights Project, which he helped found in 2007, was seeking a ruling that Tommy had been unlawfully imprisoned by his owner, Patrick Lavery. Wise argued that the chimp should be released to a sanctuary in Florida.

According to Wise and other experts, it is the first case anywhere in the world in which an appeals court has been asked to extend human rights to animals.

Lavery said that he agreed with the judges, adding that Tammy received state-of-the-art care and was on a waiting list to be taken in by a sanctuary.

"It will be my decision where he goes and not someone else's," he said.

Peters wrote for the court that while chimps could not be granted legal rights, Wise could lobby the state legislature to create new protections for chimps and other intelligent animals.

The decision, which upheld a 2013 ruling by a state judge, came after Wise on Tuesday urged a separate court in Rochester to order the release of a deaf chimp named Kiko from a cement cage at his owner's home in Niagara Falls.

Wise has also filed a third case on behalf of two chimps that live at a state university on Long Island.