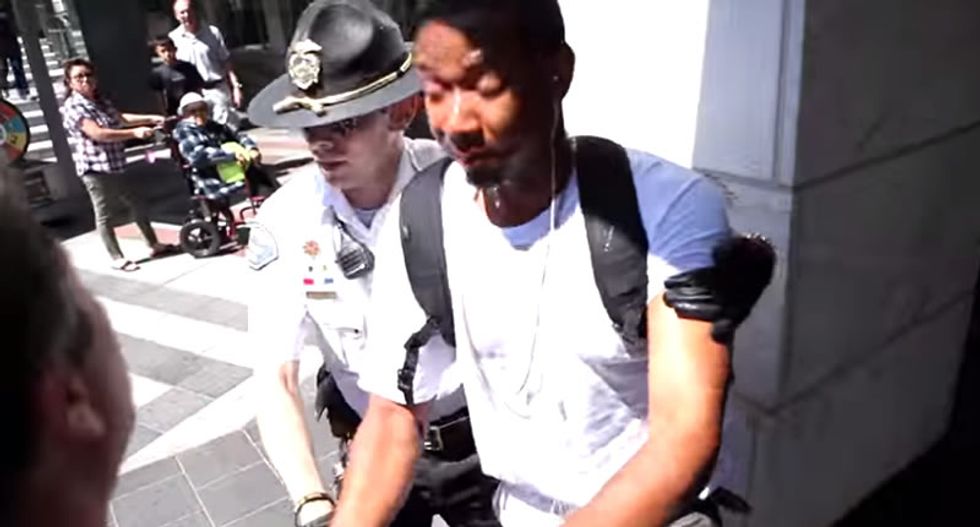 The Seattle City Attorney's office will not be pressing charges against the mall security officer who pepper sprayed a black man who wandered into a heated pro-Palestinian demonstration, The Stranger reports.

On August 9, a group of pro-Palestinian demonstrators at a Seattle mall were confronted by an irate white man who allegedly shouted "towel-head" and "sand-nigger" before trying to pick fights with them. Photographer Alex Garland was documenting the protest, and photographed the man as he became increasingly aggressive.

In Garland's photographs, the man in a blue shirt can be seen confronting the protesters. He then stripped off his shirt and began to harass not only them, but other mall-goers more aggressively.

It was at this point that he chased down Raymond Wilford from behind and shoved him. Wilford turned around and raised his fists in order to strike the man, but never did.

When the security guard, Stuart Hinds, approached the pair, they stopped threatening to trade blows and faced the officer. The shirtless white man continued to attempt to provoke Wilford into an altercation -- at which point guard Hinds pepper sprayed Wilford in the face.

"The security guard was like, 'Stop,'" Wilford told The Stranger. "The white guy was still yelling and walking towards the security guard. I was like, 'Why are you pointing your Mace at me? He's the one being aggressive.' And then [Hinds] pepper-sprayed me."

At this point, photographer Garland switched his camera from photography to video mode, and as the video embedded below makes clear, the fight between the shirtless white man and Wilford had not only stopped, but the white man had fled the scene. The protesters tried to inform Hinds that he pepper sprayed the wrong person, but Hinds refuses to listen.

Despite the photographic evidence that the shirtless white male was the assailant, however, the City Attorney's office justified its decision not to press charges on the fact that, according to spokeswoman Kimberly Mills, Hinds "appears to have discharged the pepper spray in self-defense."

In an email to The Stranger's Ansel Herz, Mills added that no charges would be filed because the office concluded -- based entirely on Hinds' testimony -- that "[a] pedestrian apparently not involved in the protest [Wilford] confronted the suspect [the shirtless white man] and, according to the security guard, shoulder-checked [the shirtless white man] in the back and spit on him."

The "shirtless white man" was never identified, and the City Attorney's office never contacted Wilford or the photographer, Garland.

Wilford told The Stranger that, had he been contacted, he would have said, "I guess I'm just randomly walking through shoulder-checking people and spitting on 'em? I don't see why I would do that."

"He [the shirtless man] spit on me as I was passing," Wilford said, "and my reaction was to turn and hit him but instead I squared off with him, and pump-faked to see if he was going to swing at me. But he never did, so I dropped it"

The City Attorney's office also claimed that the shirtless white man obeyed the security guard's order to leave the area -- even though he is clearly visible in the photographs in which Hinds is spraying Wilford.

Michael Maxwell, Wilford's attorney, said that "it seems that the prosecutor decided to buy the security guard’s version and to ignore my client’s version...even under the version of events cited by the prosecutor, if it were true, the security guard would be guilty of assault. There is a requirement of proportionality in Washington state. All Wilford did was take a half step toward the security guard with his hands at his sides. Even if Wilford was issuing profanities, that hardly warrants macing, handcuffing, and imprisoning him."

In attempting to locate Hinds, The Stranger discovered a Facebook user also named "Stuart Hinds" -- who listed his profession as "Director of Public Safety" before disabling his account -- who posted a pictured of a white security guard with his elbow on tucked under a black's neck, and commented, "I'm not going to 'arrest' you, I am just going to throw your ass on the ground, handcuff you, drag you through the mall to the Security Office with the help of my uniformed buddies...Screw arresting! Detaining is way more fun!"

Watch what happened after Wilford was pepper sprayed below via Alex Garland on YouTube.