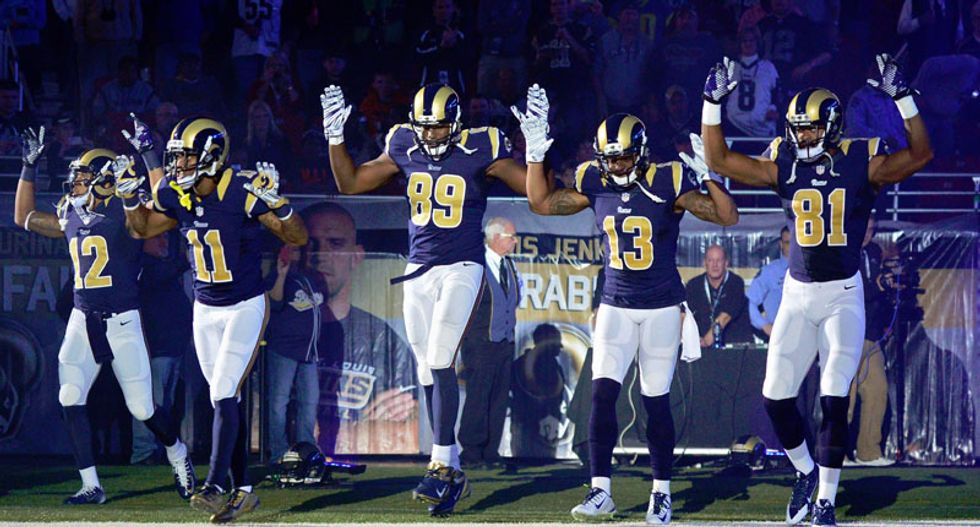 The National Football League said on Monday it would not discipline the St. Louis Rams players who staged a show of solidarity with people angry about the controversial shooting of an unarmed black teenager by a white police officer in Ferguson, Missouri.

Five of the Rams emerged from the tunnel prior to their game Sunday with their hands raised, the same way some witnesses say 18-year-old Michael Brown was positioned before being fatally shot by officer Darren Wilson in August.

"We respect and understand the concerns of all individuals who have expressed views on this tragic situation," National Football League spokesman Brian McCarthy told Reuters.

He said none of the players who took part in the protest would be fined or suspended.

Wilson fatally shot Brown during an Aug. 9 confrontation in Ferguson, Missouri, about 12 miles outside St. Louis.

Last week, a grand jury declined to indict Wilson, leading to riots in Ferguson and civil disobedience in cities around the country. The "hands up, don't shoot" pose has been a familiar posture with protesters.

Wilson has since resigned from the Ferguson police force.

The St. Louis Police Officers Association was angered by the Rams' protest at Sunday's game, calling for the players involved to be disciplined and for the team and the NFL to apologize.

"I know that there are those that will say that these players are simply exercising their First Amendment rights," said Jeff Roorda, the association's business manager. "Cops have first amendment rights too, and we plan to exercise ours."

Rams tight end Jared Cook was one of the five Rams that took part in the protest at the Edwards Jones Dome before the game against the Oakland Raiders.

"It's dangerous out there," Cook said of the situation in Ferguson. "None of us want to get caught up in that. We wanted to come out and show our respect to the protesters that have been doing a heck of a job."