NYC demonstrations against police violence attracts other causes too 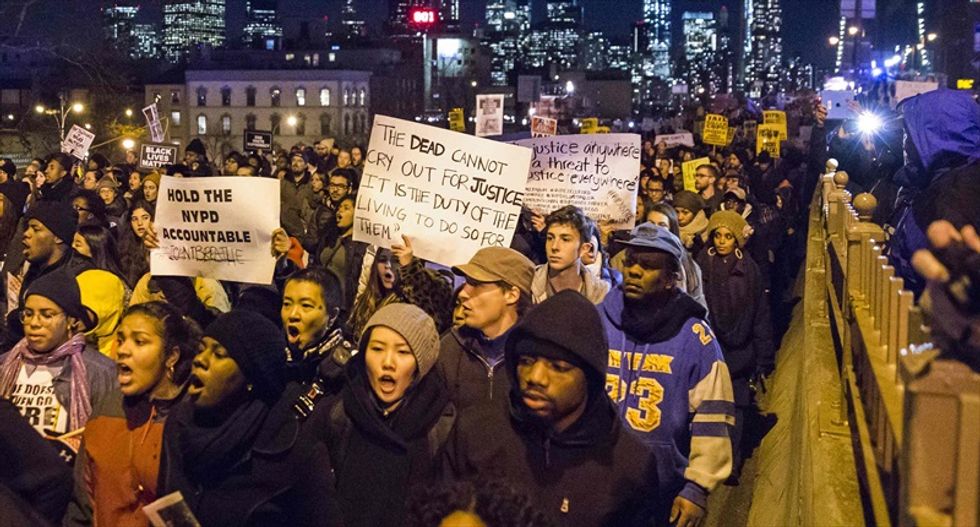 The Lower Manhattan skyline, including One World Trade Center, is seen in the background as protesters, demanding justice for Eric Garner, enter Brooklyn off the Brooklyn Bridge in New York on Dec. 4, 2014. Photo by Elizabeth Shafiroff for Reuters.

NEW YORK (Reuters) - One of the dozens of rallies and marches in New York this week to protest police violence against minorities was organized by members of Occupy Wall Street, the driving force behind worldwide protests over economic inequality in 2011 and 2012.

In the shadow of the New York Stock Exchange in lower Manhattan, leaders of the rally on Friday made passing references to the chokehold death of Eric Garner, an unarmed black man who white officers were attempting to arrest in July.

“For someone coming here for Eric Garner, it can look a bit tangential,” said Brooklyn resident Kaity Lloyd-Styles, 28, who had joined about a hundred protesters under a cold, steady rain. This week's demonstrations were in response to a grand jury's decision not to indict the police officer.

While thousands have taken to the streets in New York and other cities over the deaths of unarmed black men at the hands of police officers, other social movements and even individuals have sought to hitch their causes to the momentum.

Sumumba Sobukwe, 46, an Occupy member since 2011, said it was natural to tie all manner of social and economic inequality issues to Garner and the August shooting death of unarmed teenager Michael Brown in Ferguson, Missouri.

“The police don’t serve the people, they serve the 1 percent,” he said, referring to an Occupy rallying cry, denouncing the richest few in society.

Lloyd-Styles, a counselor for inmates at Rikers Island prison, said the Garner and Brown deaths are a “stepping stone in a long conversation about social justice in general.”

At one gathering near the spot where Garner died on Staten Island, a woman brought along her daughter who was wearing a leg cast, claiming that the police had “beat her up” and urged media to publicize the case.

Demonstrations in Manhattan have attracted activists marching to end prejudice against Muslims, and members of a branch of a self-described communist party.

At the Occupy protest on Friday night, Chris Reith, 29, was handing out flyers on claiming systemic racism in the conviction of a black pastor and activist in Michigan for election fraud.

“If people are worried about the criminal justice system and racial issues," he said, "this is a perfect case."