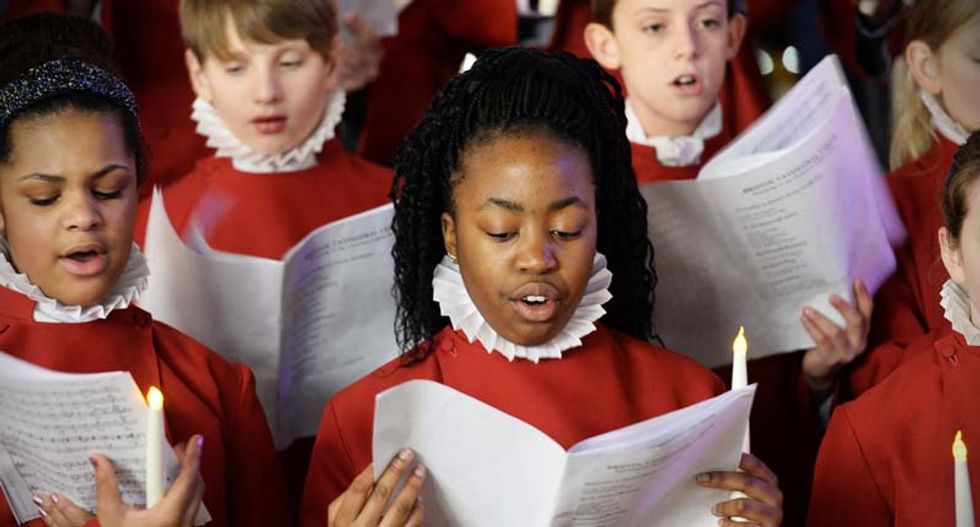 NEW YORK (Reuters) - Amid a sea of holiday shoppers, about 30 protesters, among them professional opera singers, gathered on Sunday in midtown New York to sing Christmas carols modified with lyrics lamenting recent cases of police violence against African American males.

The event, which drew smiles from onlookers, was in contrast to more charged protests, including a night earlier in Seattle, where people threw rocks at police, and in Berkeley, California, where looters smashed store windows.

In the reimagined songs, "O Little Town of Bethlehem" became "O Little Town of Ferguson," the Missouri city where Michael Brown, an unarmed 18-year-old, was shot dead in August by a white police officer. A grand jury declined last month to indict the officer, Darren Wilson, sparking a nationwide wave of protests.

Other songs included "All I Want for Christmas is an Indictment" and "Little Drummer Boy," which was remade into a dirge for Eric Garner, who died in July after being choked by a New York police officer in Staten Island. That officer also avoided indictment in a decision handed down last week.

Organizer Cassandra Oliveras, 35, a self-described "choral freak," said the idea of adapting carols to the current controversies came to her after a recent protest in Manhattan aimed at stopping the lighting of the city's Christmas tree at Rockefeller Center. Police blocked protesters from reaching the site.

"I was so angry and I felt so incredibly hopeless," she said. "I couldn't sleep that night and I just stayed up writing these things because they just poured out of me."

The carolers, who began singing at Penn Station before shifting locations, ranged from sign-bearing activists to professional opera singers.

Susanna Mentzer, a mezzo soprano who will perform in "Marriage of Figaro" on Monday at the Metropolitan Opera, said the event marked her first protest.

"I think what's so unique about current protests is that everyone I know seems outraged," said Mentzer, 57, who attended with a fellow cast member after learning of the protest on social media.

For some more experienced protesters, the singing represented a welcome change of pace.

"Friday there was a definite sense of anger. All you could do is scream," said Katie Carman, 33, a Manhattan filmmaker, referring to protests in New York.

"Today I wanted to come out and show people we can deliver this message in other ways. But I may be back on the streets shouting."