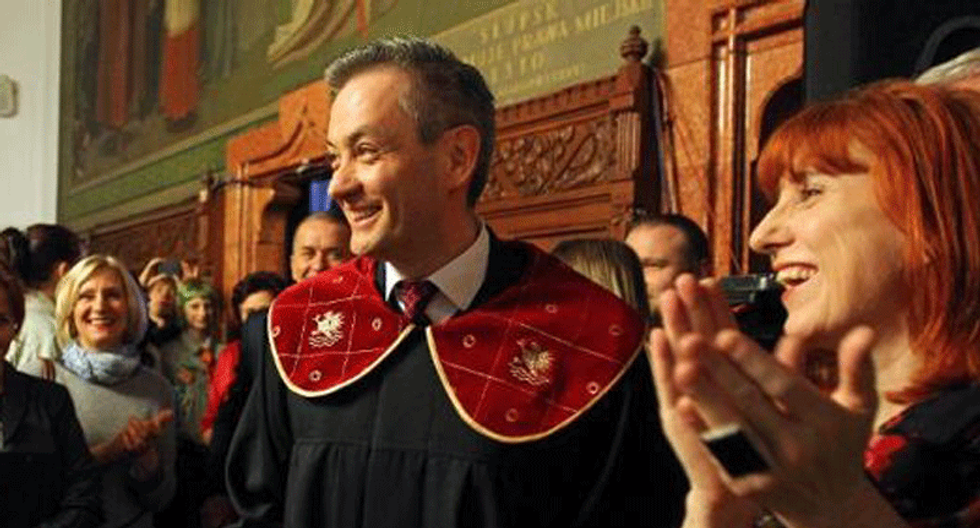 Polish deputy Robert Biedron (C) is applauded during a ceremony of his investiture as Mayor of Slupsk, northern Poland, on December 6, 2014 (AFP)

The first openly gay mayor of a large Polish city officially took power on Saturday, saying the traditionally Catholic country was "opening up".

"Poland is changing, it's undergoing a large transformation," Robert Biedron, new mayor of the northern town of Slupsk, told AFP after a ceremony at city hall.

He admitted his election could provoke negative reactions in a country that remains "mono-cultural and mono-religious", but said change was "inevitable".

"Poland will continue to open up," he added.

Poland is one of Europe's most devout countries. Ninety percent of residents identify themselves as Roman Catholic, though ever fewer are heading for the pews on Sundays.

The swearing in ceremony in the city of about 100,000 also included the reading aloud of congratulation letters from Polish President Bronislaw Komorowski and Anne Brasseur, president of the Parliamentary Assembly of the Council of Europe.

Biedron, 38, is a member of the small leftist Your Move party but ran as an independent against a candidate from the governing centrist Civic Platform party.

The gay rights activist campaigned on the slogan "Change, finally", and captured 57 percent of the vote in a runoff election on November 30.

Biedron, also a political scientist, was elected the EU nation's first openly gay member of parliament in 2011 -- the same year that Poles voted in their first transsexual lawmaker, Anna Grodzka.

The mayor, who said he will be riding his bicycle to work, was listed this year by the Polityka weekly as one of Poland's 10 best lawmakers.

Poland's first openly gay mayor Marcin Nikrant was elected in 2011 to run a village of 1,500 residents.