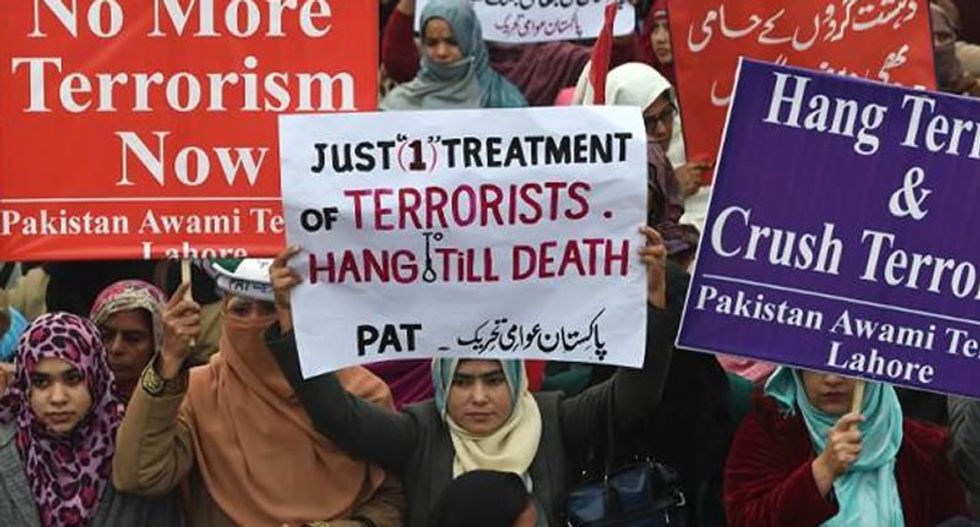 Pakistan plans to execute around 500 militants in coming weeks, officials said Monday, after the government lifted a moratorium on the death penalty in terror cases following a Taliban school massacre.

Six militants have been hanged since Friday amid rising public anger over Tuesday's slaughter in the northwestern city of Peshawar, which left 149 people dead including 133 children.

After the deadliest terror attack in Pakistani history, Prime Minister Nawaz Sharif ended the six-year moratorium on the death penalty, reinstating it for terrorism-related cases.

"Interior ministry has finalised the cases of 500 convicts who have exhausted all the appeals, their mercy petitions have been turned down by the president and their executions will take place in coming weeks," a senior government official told AFP on condition of anonymity.

A second official confirmed the information.

Of the six hanged so far, five were involved in a failed attempt to assassinate then military ruler Pervez Musharraf in 2003, while one was involved in a 2009 attack on army headquarters.

Police, troops and paramilitary rangers have been deployed across the country and airports and prisons put on red alert during the executions and as troops intensify operations against Taliban militants.

Sharif has ordered the attorney general's office to "actively pursue" capital cases currently in the courts, a government spokesman said.

The "prime minister has also issued directions for appropriate measures for early disposal of pending cases related to terrorism," the spokesman said, without specifically confirming the plan to execute 500 people.

Pakistan has described Tuesday's bloody school rampage, claimed by the Tehreek-e-Taliban Pakistan (TTP), as its own "mini 9/11," calling it a game-changer in the fight against extremism.

Political and military leaders vowed to redouble efforts to stamp out the scourge of terror in the wake of the attack, which the TTP said was revenge for the killing of their families in an army offensive in the tribal northwest.

The offensive against longstanding Taliban and other militant strongholds in North Waziristan and Khyber tribal agencies has been going on since June.

But a series of fresh strikes since the Peshawar attack, in which dozens of alleged militants were killed, suggest the campaign is being stepped up.

The decision to reinstate executions was condemned by human rights groups, with the United Nations also calling for Pakistan to reconsider.

Human Rights Watch on Saturday said the executions were "a craven politicised reaction to the Peshawar killings" and demanded no further hangings be carried out.

Pakistan began its de facto moratorium on civilian executions in 2008, but hanging remains on the statute books and judges continue to pass death sentences.

Before Friday's resumption, only one person had been executed since 2008 -- a soldier convicted by a court martial and hanged in November 2012.