Passengers beg for rescue from burning ferry off Greek island 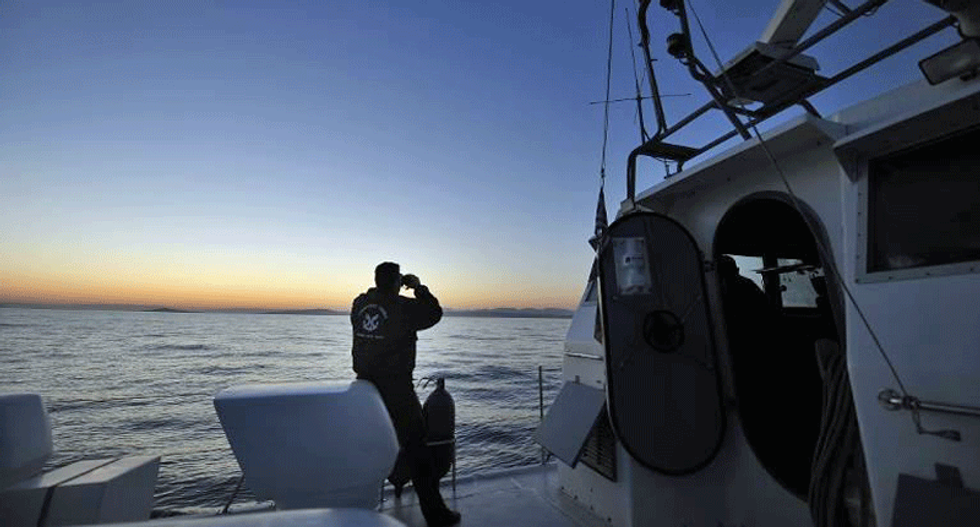 File photo of a vessel from the Greek Coast Guard, which is helping to rescue 466 passengers from an Italian ferry after a fire broke out (AFP)

Desperate passengers pleaded via mobile phone to be saved from a burning ferry off the Greek island of Corfu on Sunday as rescuers battled gale-force winds to get to them.

But with gusts of up to 100 kilometres (60 miles) per hour making rescue difficult and dangerous, the crew has so far only managed to get 150 of the 478 people off the stricken "Norman Atlantic", Greek officials said.

Seas were so violent that only 35 of those have so far been lifted from a lifeboat to a tanker that came to their aid, Greek Marine Minister Miltiadis Varvitsiotis said hours into the emergency.

He said seven merchant vessels have encircled the ferry in an attempt to shelter it from fierce Force 10 winds, as Greek and Italian firefighting vessels raced from their coasts.

Italian navy spokesman Riccardo Rizzotto said four helicopters were already at the scene and the ship's captain had told coastguards that the ferry was now drifting towards the Albanian coast.

"The weather conditions are so bad we need an extraordinary level of support, which is effectively what is being put in place," he said.

It was unclear if there had been casualties or if there were any passengers in the water, but Rizzotto one 58-year-old Italian man has been airlifted to Italy suffering from the symptoms of hypothermia.

Freezing passengers huddled on the top deck of the ship told of their terror in calls to Greek television stations.

"We are on the top deck, we are soaked, we are cold and we are coughing from the smoke. There are women, children and old people," passenger Giorgos Styliaras told Mega TV.

Another told the station that "our shoes were melting" from the heat of the fire when they were mustered in the ship's reception area.

Haulage company boss Giannis Mylonas, who was in contact with three of his drivers on the vessel, said there were between 20 and 25 tanker trucks filled with olive oil on board.

"They are taking too long to find a way to help them. Let's hope this ferry will stand the heat of the fire," he told the station.

Vessels close to the ANEK Lines ferry, which caught fire 33 nautical miles off the small Greek island of Othonoi, rushed to give assistance after picking up its distress signal at 0200 GMT, the Greek coast guard said.

With high winds and torrential rain and sleet, Greek authorities described efforts to rescue the passengers "as particularly difficult and complicated".

The blaze on board is said to have broken out in the ferry's car deck.

The Greek maritime ministry said 268 of the passengers were Greek, with the crew made up of 22 Italians and 34 Greeks.

By 0930 GMT around 35 passengers had been picked up by the Greek tanker "The Spirit of Piraeus", but another 115 were still stuck in a lifeboat, with towering waves and lashing wind hampering their transfer.

Four Greek and Italian firefighting ships were on their way to the scene, which is in the middle of a busy shipping lane, as well as four Italian patrol boats. At least three Italian and Greek helicopters circled overhead.

The "Norman Atlantic" had left the Greek port of Patras at 05:30am (0330 GMT) and had been heading to the Italian port of Ancona when the fire took hold.

Greek Defence Minister Nikos Dendias told Mega television that Italian authorities had responded to a Greek plea for assistance and were now in charge of the rescue effort. The operation was being coordinated from the Italian ship "Europa".

The car deck of the Italian-flagged "Norman Atlantic" was believed to have been holding 195 vehicles when the fire broke out.

According to rescued passengers, the intense heat rapidly affected the rest of the ship. However, passengers stranded on the top deck of the ship later seemed to be more worried by the storm, telling Greek TV the flames were subsiding.

Neither ANEK Lines nor the ship's owners had made any comment by midday (1100 GMT).