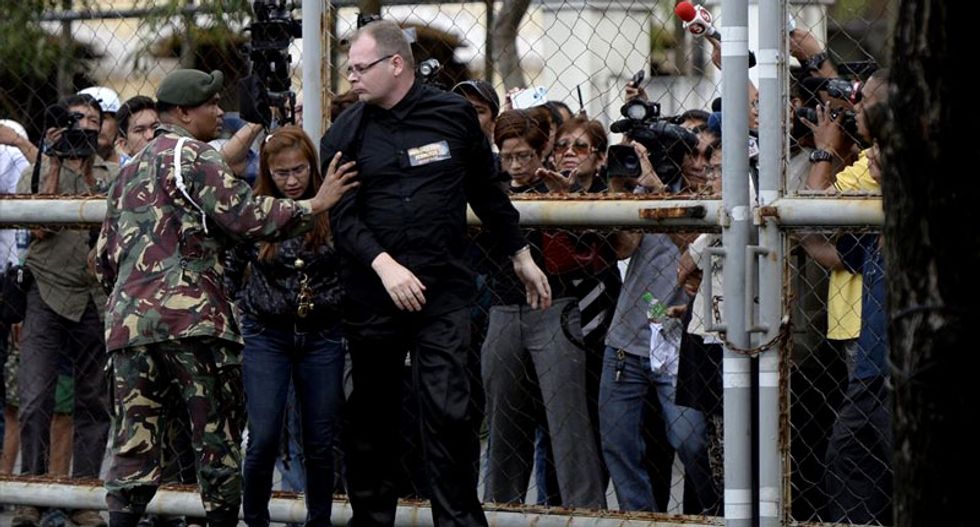 Philippine prosecutors on Monday filed murder charges against a US Marine accused of killing a Filipino transgender woman, in a case that has fanned anti-American sentiment.

"You can see the kind of cruelty she (victim) endured, the injuries she sustained," delos Santos said.

"We believe we have a strong case."

Pemberton will not be allowed to post bail, she said. Murder is punishable by up to 40 years in jail.

Jennifer Laude, a 26-year-old transgender woman also known as Jeffrey, was found dead on October 12 in a cheap hotel in the port city of Olongapo. She was half-naked in a bathroom with marks of strangulation on her neck, according to police.

Laude died from "asphyxia by drowning", according to a police autopsy.

"This is not an ordinary murder. This is heinous because she was beaten up," Laude family lawyer Harry Roque told reporters.

Pemberton, who had just finished taking part in US-Philippine military exercises near Olongapo, had checked into the hotel with Laude and was the last person seen with her, police said

Pemberton, aged 19 at the time of the death, had asked prosecutors to downgrade the murder charge to homicide, which carries a maximum 20-year prison term.

Laude's death sparked street protests and the public outcry pressured the Philippine government to seek the transfer of Pemberton's detention from a US warship to military headquarters in Manila.

Under a 1998 agreement governing US troops when they are in the Philippines, Filipino courts have jurisdiction over cases involving American soldiers accused of crimes.

But the agreement also allows suspects to remain in US custody.

"We look forward to the full cooperation of the US government in ensuring that justice is secured for Jeffrey 'Jennifer' Laude," Philippine foreign ministry spokesman Charles Jose said in a statement.

President Benigno Aquino has said the case should not sour relations with the United States, the Philippines' most important diplomatic and military ally.

"Name me any place that doesn't have any crime. And the sin of one person should be reflective of the entire country? I don't think so," Aquino said in October.

Following formal charges by prosecutors, the local court which has jurisdiction over the case will decide whether there are enough grounds for the accused to stand trial, although there is no timetable for this process.

The case is the second major test of the 1998 Visiting Forces Agreement.

In 2006 US Marine Lance Corporal Daniel Smith was sentenced to 40 years in jail after being found guilty of raping a Filipina a year earlier.

Smith, however, walked free in 2009 after his accuser recanted her statement, prompting an appellate court to acquit him.

The US military presence has long been controversial in the Philippines, a former colony of the United States.

The United States was forced to close down two major military bases in 1992, after the Philippine Senate bowed to anti-US sentiment and refused to renew their leases.

However the 1998 agreement allowed US troops to take part in war games on Philippine soil.

Military exercises involving thousands of US soldiers have since taken place each year.

In March a new agreement was signed to allow a greater US troop presence in the Philippines, including more exercises and the building of new facilities.

This was part of US President Barack Obama's so-called pivot to Asia.

Aquino has courted a greater US presence to try to counter what the Philippines sees as rising Chinese aggression in a long-running territorial dispute in the South China Sea.

The agreement signed in March has not been implemented, while the Philippine Supreme Court deliberates on a challenge to its legality.