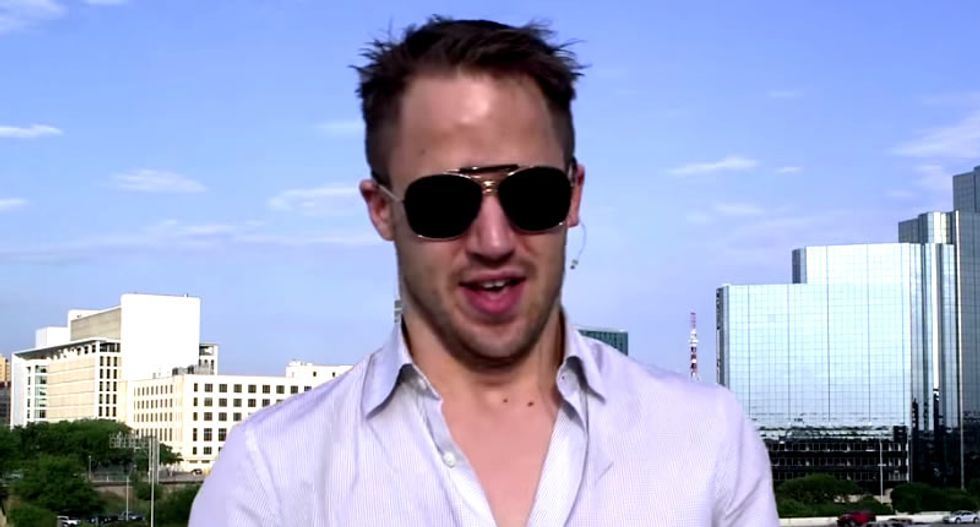 One of the most prominent members of the "pick-up artist" (PUA) community has come under fire for his aggressively physical techniques, but his employer is refusing to fire him, The Daily Beast reports.

The Swiss-American pick-up artist Julien Blanc had been one of Real Social Dynamics' most popular speakers until a recent trip to Australia led those outside of the PUA community to investigate his methods.

Particularly disturbing were videos of Blanc, who claims to have "a PhD in female attraction," in which he teaches American men how to sexually assault Japanese women. "Just go through Tokyo, grab girls and yell 'Pikachu,' then put her on your dick," he can be heard saying.

As news of the videos -- as well as a Twitter hashtag campaign, "#ChokingGirlsAroundTheWorld" -- spread, Australian venues began to cancel his seminars.

Blanc responded by setting his Twitter and YouTube accounts to private, and insisted to CNN that his personal social media profile doesn't reflect the teachings of Real Social Dynamics, and the company has pulled the videos that led to the criticisms. It also switched all of the privacy settings on its member forums -- as well as its Facebook page -- to private, and encouraged many of the instructors of its seminars to do the same.

In an email obtained by The Beast, RSD co-founder Nick Kho advised members of the company's inner circle to "just stick to the mission," because "[a]nything that you are doing that is not approved by our executive team is in total disregard for our media message and ruins everything."

"We have a stronghold on a gameplan to revitalize the company," the email continued. "Our plans include a strong focus on revitalizing our image, content, and business model. In order to make this happen, we must stick to our vision of staying strong and offering amazing content to clients while making sure that we stay close to our values. Help us do so. The team is still together. We will grow."

According to Vice, the company's other co-founder, Owen Cook boasted in one seminar about forcing himself on a woman against her wishes.

"She was taking a shower, and I didn't think she wanted to have sex again," Cook says in footage posted online. "But I just threw her on the bed and I put it in her, and I could barely even get it in because she was just totally not in the mood. And I was like, 'F*ck it, I'm never seeing this b*tch again. I don't care.'"

Watch a video of Julien Blanc in Japan, as posted online, below.