Plan on protesting? Experts explain your rights -- and what the cops can (and cannot) legally do 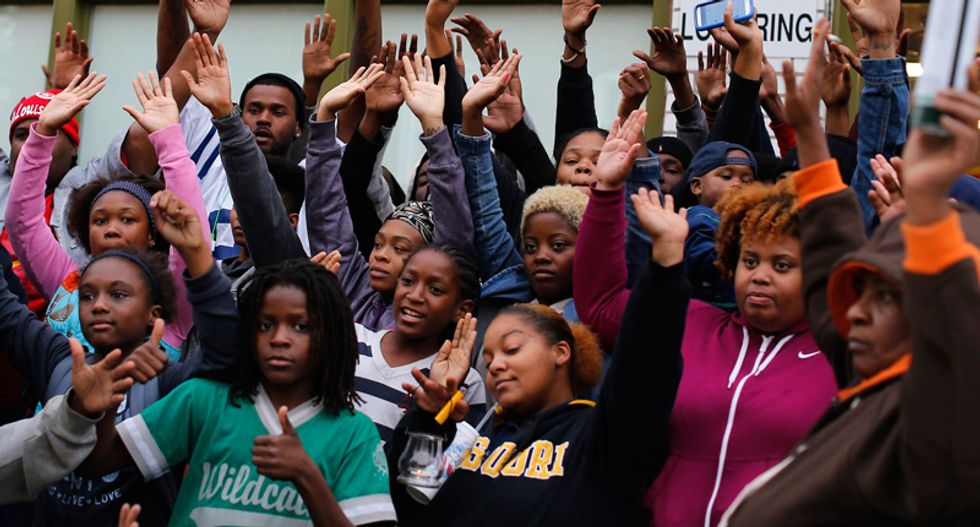 People hold up their hands in protest at a vigil in St. Louis, Missouri, October 9, 2014. (REUTERS/Jim Young)

Everyone knows the First Amendment guarantees free speech and freedom of assembly—the right to protest. But as demonstrations build across the country over institutional racism and excessive force in policing, there are other things protesters need to know, from legal limits on protests to what to do if arrested.

In some cities, there’s no guarantee that police will behave, balancing the rights of protesters with what they will say are the rights of everyone else. In recent years, cops have rounded up protesters and bystanders, quarantined or held them without charges for a day or more, and then let them go—pretending the whole episode never happened.

What follows are summaries and links to five guidelines and legal analyses for protesters from civil rights’ lawyers. They say what you can and cannot do, tell protesters to be prepared for possible arrest, what to do if arrested and more.

1. The ACLU Lays Out The Basics. Yes, the First Amendment says you can speak out. But the law—based on a mountain of legal decisions—regulates the “time, place and manner” where your speech can occur, the ACLU’s guidelines remind us. You can assemble in most public places, such as streets and sidewalks, but not inside federal courthouses or on private property—like shopping malls.

You can set up tables on sidewalks and give out flyers. But bigger events, where a sound system is used, could cross the line in some locales that require protest permits. You also have to be aware that counter-protesters have the same legal rights to be present and speak. The ACLU also warns against arguing with police officers in the street.

2. Now You Have To Prepare To Protest. As this guide from St. Lawrence University says, there’s more to do than having planning meetings, hanging posters and signs, and calling the media to cover you. “Safety is one of the most important things,” they say. “We go into a protest knowing that there is a chance that we will get arrested, tear gassed, shot with rubber bullets, or billy clubbed.  This isn’t to be dramatic, but realistic.”

They discuss the need for affinity groups, having non-violent training, legal information, contact information for participants, setting up a voicemail box to keep in touch, anticipating lodging and food needs, and making banners and noise makers. Their details are good, such as what to bring—paper, pens, cameras, water, energy bars, and even “bandannas soaked in vinegar (1:15 ratio) or lemon juice in a plastic bag” to neutralize tear gas. They also remind people what not to bring, such as illegal drugs and weapons.

3. Know Your Cellphone Rights. Cellphones can document police counter-protest tactics and be a very powerful tool in the media and in court. But cellphones also are a treasure trove of private information for police if you are arrested. Luckily, the U.S. Supreme Court, in a rare decision affirming the rights of individuals above the government, last June ruled that police need a search warrant to examine cellphones. But as Slate.com has noted, that alone may not stop cops from confiscating phones and trying to look at them anyway—starting with pressuring you to reveal passwords.

The Electronic Frontier Foundation’s guide for cellphones at protests suggests having encrypted “end-to-end” communication software for calls and texts. They note that despite the Supreme Court’s ruling, cops will still pressure people for passwords. They also suggest reading the ACLU’s advice on photographers’ rights, which include that police cannot demand to see your pictures or videos without a search warrant, nor can they freely delete them from cameras and phones.

4. What To Do If It Gets Ugly. This guide from MatadorNetwork.com reminds protesters to be prepared and lookout for a police crackdown. They tell people that cellphones can become unreliable if they get wet. They remind people that certain cosmetics will worsen the effects of tear gas, such as “heavy creams or lip balm.” They suggest identifying possible escape routes and looking for signs—such as the arrival of SWAT units—that police are preparing for a round up. Should one get tear-gassed, they suggest getting home quickly, removing one’s clothes and shoes, and starting a long shower with cool water and soap.

5. What To Do If You’re Arrested. This guide from the Center for Constitutional Rights tells people who commit nonviolent civil disobedience what they can expect if arrested. That action could be as simple as lying down in the street—the “die-in” protests—or not moving when police say they’re trying to clear a street or let an ambulance through. They mention the prospect of being charged with different state and federal offenses, and that protesters should expect to spend at least several hours—or even a day or more— in jail. They also discuss the consequences of an arrest, from having to appear in court months after the protest, to the possible impact on student loans, to the reality that non-citizens who are arrested almost always face much harsher treatment.

6. Advice For Hardcore Activists. This guide, from OccupyWallSt.org, tells how to use your body to “maximize your protest!” It discusses linking arms, sitting down in the street, passive resistance, using a variety of chains and locks to attach oneself to cars and fences, as well as arm tubes requiring the police to dismantle them (including tips on avoiding injury). It even discusses buying and abandoning used cars in the street to thwart police.

The guide also talks about having communication networks established and supporters nearby for assistance, in case of a crackdown. They note people on the sidelines also can be arrested, and suggest that someone be designated as a police negotiator ahead of time, “since they can’t offer effective support from the back of a police transit van.”

As you can see, the right to speak freely is not as simple as it sounds. The bottom line in First Amendment law is that political speech is still governed by “time, place and manner” restrictions. In the heat of the moment, protesters cannot count on police to defer to their constitutional rights—in the same way a judge might when reviewing what happened afterward. That means the people who want to protest should hope for the best, but prepare for the worst. That's the sad state of democracy in America today.