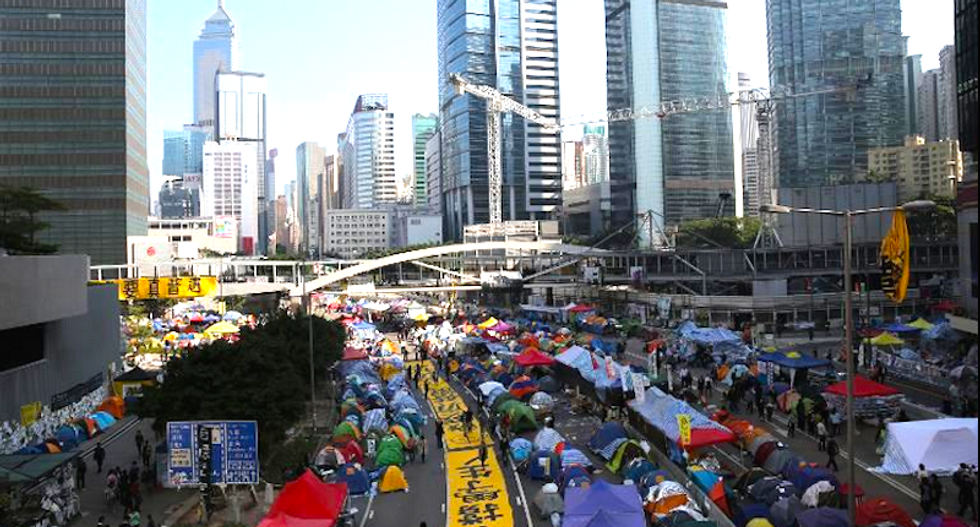 The clearance of Hong Kong's main pro-democracy protest camp will begin Thursday when bailiffs move in, authorities said, but some demonstrators vowed to stand their ground after more than two months of rallies.

Public support has waned for a movement that saw tens of thousands take to the street at its height.

Recent violent clashes have sparked fears that radical splinter groups will dig in for the final stage of the occupation of main roads in parts of the city.

The student-led demonstrators are demanding free leadership elections in 2017 for the semi-autonomous Chinese city -- but China's communist authorities insist that candidates must be vetted by a loyalist committee.

A High Court ruling published Tuesday called for the clearance of three sections of the main Admiralty protest site, in the heart of Hong Kong's business district, where a tent city sprawls across a multi-lane highway.

Bailiffs will enforce the order on Thursday morning with authorities asking protesters to leave voluntarily before then.

But with reports saying that the clearance will go beyond the parameters of the court ruling and clear the whole site, some at the camp say they will resist.

"I think if they clear the whole of Admiralty, because the injunction is only for one area, people are going to react violently," one 27-year-old protester who gave his name as Alex told AFP.

"I don't agree we should leave without getting any progress."

Protest leader Alex Chow of the Hong Kong Federation of Students (HKFS) told AFP that occupiers would remove barricades from the injunction zones to avoid action from bailiffs and police.

He added that if there was a swoop on the entire site, HKFS would "stick to non-violent principles".

The protesters have been unable to wring any concessions out of the authorities in Hong Kong or Beijing, which have branded the demonstrations "illegal."

Frustrations boiled over at the end of November when protesters and police clashed outside government headquarters, leaving dozens injured on both sides.

That prompted the leaders of the Occupy Central campaign group to hand themselves in to police in a symbolic move to get the protests off the streets.

The Admiralty injunction, sought by a bus company, allows bailiffs to "request the assistance of police" where necessary to clear the site next to the government headquarters.

Bus company lawyer Paul Tse told reporters the injunction would be enforced from 9:00 am Thursday (0100 GMT) and bailiffs posted injunction notices on barricades and lamp-posts on Tuesday afternoon.

Tse added that he hoped protesters would "voluntarily retreat" before then.

Although the ruling only covers parts of the Admiralty protest zone, local media reports said that police -- who have always labelled the occupation illegal -- would clear the entire area, as well as a smaller protest site in the shopping district of Causeway Bay.

A third protest camp in the commercial zone of Mongkok was cleared late last month.

Protesters would stay "until the last minute" but not directly confront police, said a 31-year-old artist at the Admiralty site who gave his name only as Wong.

"You do see people moving from the court injunction area, but they are not retreating entirely," he said.

"I can't speak for everyone but people here are willing to be arrested."

Police would likely clear Admiralty Thursday "including areas that are not covered in the injunction order" a police source told the South China Morning Post.

The Causeway Bay camp could also be cleared that day, the source said.

When asked about the level of force police would use, city leader Leung Chun-ying told reporters Tuesday it would be "minimal."

While some are preparing to stand their ground, others are leaving.

"Many people have gone home and think this movement can be continued in another way -- through forums or the Internet," said 22-year-old student Mani who volunteers at one of the Admiralty site's supply stations.

The supply stall had moved out of the injunction zone to a different area, she said.

Local media reported that several thousand police could be deployed for the site clearances.