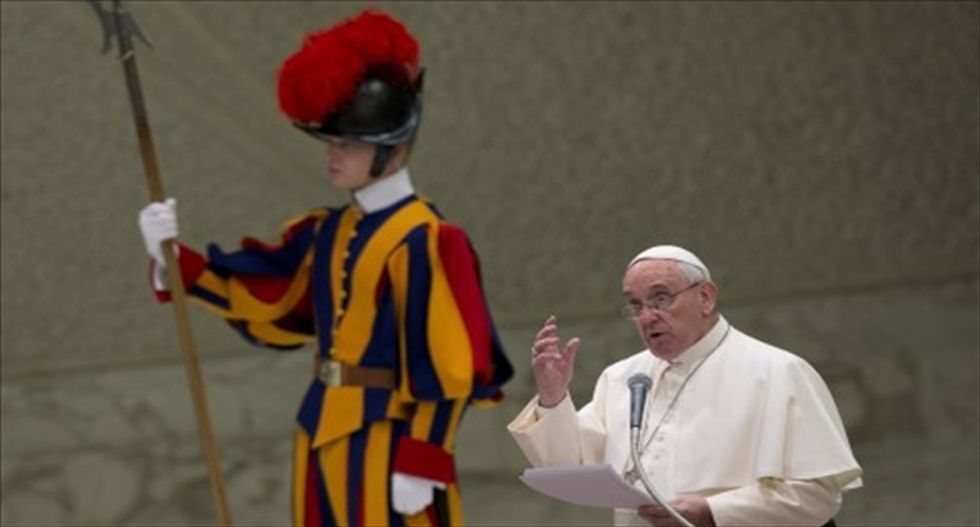 The pope led Christmas Eve mass in the Vatican on Wednesday calling for "tenderness" and "warmth" after a violence-plagued year as millions of Christians began marking the holiday.

The Argentine pontiff's brief homily was replete with Gospel references in his Christmas Eve mass, broadcast live in 3D for the first time.

"Do we have the courage to welcome with tenderness the difficulties and problems of those who are near to us?" Pope Francis asked in Saint Peter's Basilica, filled with some 5,000 worshippers.

"Or do we prefer impersonal solutions, perhaps effective but devoid of the warmth of the Gospel? How much the world needs tenderness today!" he said.

The leader of the world's 1.2 billion Roman Catholics also called on "the arrogant, the proud... (and) those closed off to others" to meet life "with goodness, with meekness."

In Bethlehem meanwhile, hectic preparations preceded celebrations on the West Bank town's biggest night of the year, culminating in midnight mass at the Church of the Nativity built over the spot where Christians believe the Virgin Mary gave birth to Jesus.

Scouts playing bagpipes and drums marched to the church in a procession led by Jerusalem's Latin Patriarch Fuad Twal, the top Catholic cleric in the Holy Land.

Outside the church at Manger Square, a man dressed as Santa Claus handed out sweets next to a giant green Christmas tree decorated with red, black and silver baubles -- the colours of the Palestinian flag.

But for many faithful across the region, the festivities will be tinged with sadness following a year of bloodshed marked by a surge in the persecution of Christians that has drawn international condemnation.

For many of you, the music of your Christmas hymns will also be accompanied by tears and sighs," Pope Francis wrote in a long letter addressed to Christians in the Middle East.

Ahead of the celebrations, the Argentine pontiff voiced concern about the growing persecution of Christians, some of whom he said had been "brutally driven out" of areas where they have lived since New Testament times.

"Dear brothers, I am close to you, very close to you in my heart," the pope was quoted as telling the refugees by Italian press agency AGI.

"The children and the elderly are in my heart," Francis also told the Iraqi refugees in the Ankawa camp.

In Baghdad, Chaldean Patriarch Louis Sako said about 150,000 Christians had been displaced by an offensive spearheaded by the Islamic State group, which has targeted Christians and other minorities, with dozens leaving Iraq each day.

Iraq's displaced Christians "still live in a tragic situation and there are no quick solutions for them," Sako told AFP, saying that particularly this Christmas, they needed reassurances that they "are not left alone and not forgotten".

In Syria, Christians in the war-torn city of Homs were enjoying their first Christmas in three years in the Hamidiyeh neighbourhood, with a brightly coloured tree and a manger made from rubble set up in the middle of the ruins.

"Our joy is indescribable," said Taghrid Naanaa while picking out tree decorations at a shop in the district, which the Syrian army recaptured from rebel fighters this year.

Elsewhere around the world, around 100 pro-democracy activists in Hong Kong marked Christmas Eve with the first sizeable rally since the clearing of a central protest camp last week.

In France, the busy Christmas period has been marred by a series of attacks, including one linked to Islamic extremism, which killed one person and left another 25 wounded.

In the United States, officials scrambled to contain renewed anger after an armed black teenager was shot dead by a white officer in a St Louis suburb late Tuesday.

The incident occurred near Ferguson, a mainly African American town with a mostly white police force -- ground zero of a protest movement over police killings of black men -- and triggered immediate demonstrations.

And in Sierra Leone, all public Christmas celebrations were cancelled as a result of the Ebola crisis, with soldiers deployed on the streets over the holiday season to prevent spontaneous street celebrations, officials said.

Ahead of the midnight mass in Bethlehem, Palestinian president Mahmud Abbas laid out his own Christmas wish-list.

"This Christmas we deliver a very special message to the world: All I want for Christmas is justice," he said as the Palestinians press a major diplomatic push at the United Nations to seek an end to Israel's decades-long occupation.