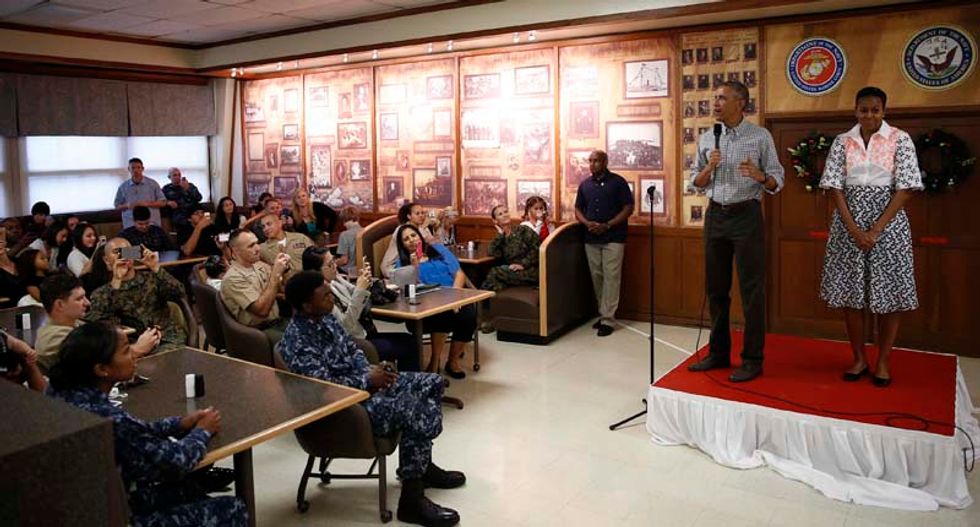 KANOEHE BAY, Hawaii (Reuters) - One week before the U.S. combat mission in Afghanistan draws to a close, President Barack Obama and his wife, Michelle, thanked American troops on Thursday during a Christmas Day visit to Marine Corps Base Hawaii in Kanoehe Bay.

One man in the crowd yelled "Huah!", a traditional cheer of the U.S. military, and the audience applauded as Obama spoke of the United States officially ending its fighting role in Afghanistan after 13 years of conflict.

"Because of the extraordinary service of the men and women in the American armed forces, Afghanistan has a chance to rebuild its own country," Obama said.

The Taliban were ousted by U.S.-backed Afghan forces in 2001, following the Sept. 11 attacks on America by Islamist militants using hijacked airliners, and the United States has kept a military presence there ever since.

With the end of the NATO-led combat mission in Afghanistan, the Obama administration said earlier this month it would leave a residual U.S. force of about 10,800 troops behind for at least the first few months of 2015 to help provide support to Afghan security forces.

This year has been the deadliest in the war, with more than 4,000 Afghan soldiers and police killed during the past 12 months. The conflict has claimed the lives of more than 2,000 U.S. military personnel.

Obama told a crowd of 420 people, including troops and their families, gathered in the U.S. Marine base's Anderson Hall dining facility that Afghanistan is "not going to be a source of terrorist attacks again."

Obama said the United States still has "some very difficult missions around the world," mentioning Iraq, where U.S.-led coalition forces are countering the Islamic State. In Africa, U.S. troops are helping to battle an Ebola epidemic that has killed at least 7,500 people.

The president and first lady then spent time talking to the troops individually and taking pictures with families.

The White House said the Obamas spent Christmas morning opening presents and singing carols and then spent the afternoon at a nearby beach.