Protests flare up in St. Louis over latest police shooting of African-American man by police 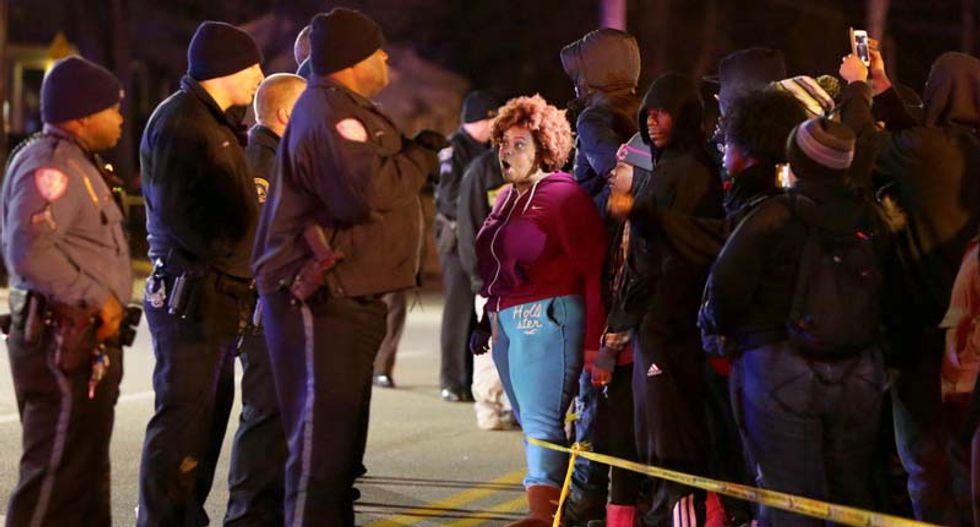 Protesters yell at police protecting the perimeter of a scene where a teenager was fatally shot by a police officer earlier at a Mobil gas station on North Hanley Road in Berkeley, Missouri, December, 24, 2014. REUTERS/David Carson/St. Louis Post-Dispatch/TNS

BERKELEY, Mo. (Reuters) - Protests flared into early Thursday in the St. Louis suburb where a white policeman fatally shot a black man who brandished a gun at a gas station on Tuesday night.

A group of protesters marched onto Interstate 170 in the city of Berkeley, Missouri, around 7 p.m. on Wednesday, blocking traffic for roughly 45 minutes. The demonstration followed a vigil at the Mobil On The Run gas station where the shooting occurred.

The site was just a few miles from the Ferguson street where a white police officer shot dead 18-year-old Michael Brown in August, fuelling weeks of protest in the region and across the country.

Demonstrations that drew as many as 150 people were largely peaceful throughout the night, but at one point officers disrupted an attempt by several people to break into a beauty supply shop.

At least two people were taken into police custody. Authorities were unable to provide further details.

Black public officials in Missouri were at pains on Wednesday to distinguish the death of the suspect, whom they noted was holding a gun, from cases of unarmed black men who had been killed by police officers. The latter incidents have led to protests across the United States and bitter debate about how U.S. police forces treat non-white citizens.

"This is not a policeman in the city of Berkeley going out half-cocked," Berkeley Mayor Theodore Hoskins said at a news conference. "You could not even compare this with Ferguson."

Shortly after the shooting on Tuesday night, a crowd of up to 300 people gathered at the scene, where bricks and three fireworks were thrown, two of them at the roughly 50 officers at the scene, St. Louis County Police Chief Jon Belmar said.

Two officers were injured and four people were arrested for assault, Belmar said.

The shooting occurred three days after a man summarily shot dead two officers in their patrol car in New York City, targeting them only because of the uniform they were wearing.

The Berkeley encounter unfolded after the officer, a six-year veteran of the town's police department who was responding to a report of a theft, got out of his car to talk to two men at the gasoline station.

One of them pointed a loaded 9mm handgun at the officer, Belmar said. Police released an indistinct, distant surveillance video from the gas station, edited to end just before the shooting.

In the corner of the frame, one of the people at the station can be seen raising one or both arms in what might be a shooter's stance near the police car, although the footage is too dark and grainy to establish that the person is holding a gun.

Two other videos released later by St. Louis County Police were similarly ambiguous, recorded by security cameras that appear to have only restricted views of the scene.

The officer fired three shots, Belmar said, a sequence captured on one of the three videos. One bullet struck the man with the gun, whom paramedics declared dead at the scene, he said.

Police said they found a handgun with a defaced serial number at the scene.

The officer, who was not identified and was put on administrative leave, had been given a body camera in a pilot program but was not wearing it at the time of the shooting. The dashboard camera on the officer's car was also off.

Protests in Ferguson have taken place for months and spilled over into violence when a grand jury decided a month ago not to charge the police officer who shot Brown.

Demonstrations in cities across the country gained in momentum when a New York grand jury decided not to indict a police officer over the death of Eric Garner, a 43-year-old black man who died in July when police tackled him and put him in a choke hold.