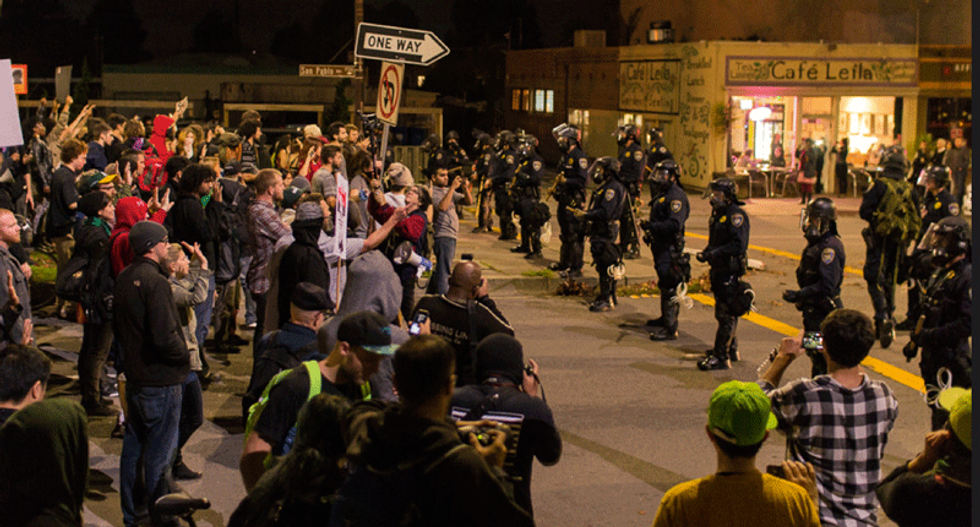 Across America, protesters and police increasingly seem to be on a collision course. Whether demonstrations in Ferguson, Missouri, or during the Occupy Movement, or at routine political party conventions, police increasingly show up heavily armed and ready to use force to control crowds. The results are often unnecessary violence, prompting the same questions after every confrontation, “What could have been done differently?”

The Deciding Force Project is analyzing thousands of police-protester interactions during the Occupy protests to answer that. Nick Adams, a sociologist and fellow at University of California Berkeley’s Institute for Data Science, oversees this research and spoke to AlterNet’s Steven Rosenfeld about what provokes police-protester violence.

Steven Rosenfeld: Are police provoking violence in demonstrations? Are they doing this? And then we can get into the evidence and talk about what might be different.

Nick Adams: The way that we answer that question is we have data from over 8,000 news accounts: newspaper, radio, television, local, regional, national—accounts covering events of the Occupy Movement across the United States, 192 different cities. We gather all of this information and then we parse it and turn it into numbers and a database, and we can look at interweaving narratives in each city across different events. Whether they’re protests, marches, demonstrations, or police raids of camps, or whatever they are. We can look at the strategic, operational and tactical level, and see how violence is emerging—sometimes strategically, often at the most emotional escalations that are occurring on the ground.

So to answer your question, do police provoke violence? Certainly, sometimes. Whether they’re doing it intentionally or not varies, moment to moment. Sometimes police provoke a standoff or some kind of force strategically, but often times it emerges out of an escalation with protesters. All of this is shown in the data that we have. We’re still processing data so we can put hard numbers on it.

SR: Let’s break it down a little bit. You’re talking about several different situations, such as police going to where people are camped, or where they are lined up. Where is violence between protesters and police more likely, or less likely, to occur?

NA: We need to be careful about how we are defining violence. For some people, when they hear violence, they might think rubber bullets, tear gas and batons, and so on. In our work, we define it as any use of force. And that goes for protesters also, if protesters are pushing police officers, even if it’s not hurting them. We are really interested in force, even more so than just violence.

But force is more likely to occur when police use skirmish lines—when police get into line of officers and are challenging protesters’ ability to move or to be in a particular space. It happens, obviously, when police raid an encampment and they pull people out of tents, with the use of force. When police show up in riot gear and signal to protesters that they’re ready for a fight. Whether or not police actually engage in the first acts of force, we have seen in the data there are higher rates of force being used by either or both parties once police show up in riot gear.

When crowds seem very very large, police seem more likely to engage in the use of force. We think that’s because they’re human too, and they experience fear when they see a crowd of 5,000 people. Only 2 or 3 or 5 or a dozen of those protesters get out of control are engaging in property destruction and pushing officers; it’s hard for the police to see just those handful of people and only worry about them. They become worried about the whole crowd of 5,000. And it puts them in a state of fear. It doesn’t matter how much riot gear you have.

SR: What especially sets off or provokes protesters? Is it just seeing the police show up in those lines? Or is it when they actually start walking toward them?

NA: There’s a variety of reactions by protesters when police march in line toward them to arrest them, or kennel them, like they did on the Brooklyn Bridge. Or when police show up in riot gear, there are a variety of reactions. Some protesters are intimidated and they run away. Some become defensive and they get agitated, and they have a commitment to not engaging force or violence, but they’re pretty angry. And some people see it as a provocation; they see it as the opening salvo in a fight, and they get ready to fight. And in some places, there are protesters who are ready to fight when they woke up that morning. There’s a range of reactions. But we do see that when police use two of these tactics—particularly the skirmish line and the riot gear. When police don’t use those tactics, the broad, vast majority of protesters who are seeking the airing of their grievances have a fine interaction.

SR: Do you see that the police are intentionally baiting protesters? Realizing that if they show up in a certain way that they are likely to provoke some kind of confrontation?

SR: Where do your lessons or solutions begin? Where would de-escalating begin? What would it look like?

So what that does is it allows us to identify the decision points where things can go one way or another, and each party has some agency in deciding whether there will be an escalation or not. When we can identify those decision points, we can train protest organizers and police in recognizing them, and making the right choices to avoid violence—which often delegitimizes both parties in the eyes of the bystander public.

SR: Don’t you think the fact that protests have become more regulated—protest zones; the protesters here, the press there, free speech zones far away from the targeted audience or actual venue, which is the reason for being there—so you see that as making these situations more volatile?

NA: Our research is on the interaction between police and protesters, wherever they happen to be. I think your question is an entirely legitimate question. Our research can’t totally speak to that. If I would give you an answer, it would be my opinion as a citizen. But there does need to be a debate in this country about whether freedom of speech and freedom of assembly, as imagined by the founders, means we are free to assemble far away from the audience for the grievances we want to air.

NA: We will have data on what the outcomes are and how the police are showing up—what kind of gear they are showing up with? It will be a little bit challenging to see the causality, as opposed to the correlation with those questions. But there’s research in social psychology that actually shows that we people have some tool, at their disposal, in their hands, they’re likely to find a way to use it.

SR: What do you think is the most important takeaway from this research as you step back from it and look beyond the headlines in Ferguson and elsewhere?

NA: If you look around the world there are crises of governance, where people are realizing that their systems of government are not meeting their needs. That’s not just here in the United States, but all over the world. People are going to be frustrated. They are going to be taking to the streets.

We really hope that our research is able to hold everyone to a higher standard of behavior when there are interactions between citizens and the state, when citizens are aggrieved. We want to make sure that everyone knows when these parties are intentionally engaged in violence or provoking violence, to ensure that there are other routes to reform or change in the political system. And those routes are not overshadowed by violence.