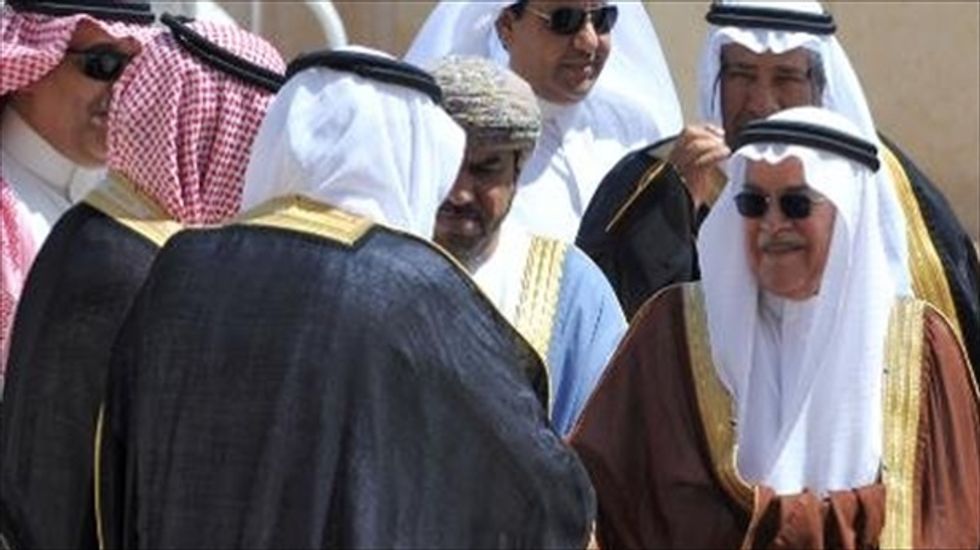 Saudi Oil and Energy Minister Ali al-Naimi (R) during a meeting of the Oil Ministers of the Gulf Cooperation Council held in Riyadh, on Sept. 24, 2013 (AFP)

Saudi Arabia announced a 2015 budget with a huge deficit Thursday as the world's largest crude exporter begins to feel the impact of its own decision not to shore up oil prices.

The government announced the $38.6 billion deficit on state-run television, saying it would nonetheless boost projected spending by tapping its vast financial reserves.

The lead producer in the Organization of the Petroleum Exporting Countries, Saudi Arabia has insisted the cartel will not move to strengthen global oil prices despite a drop of nearly 50 percent since June.

OPEC has maintained a production ceiling of 30 million barrels per day, in a move analysts say is aimed at stifling competition from new market players with higher costs, in particular North American shale oil producers.

Saudi officials have vowed not to boost production no matter how low prices go, regardless of the impact on the country's coffers.

Projected spending is slightly higher than planned for this year, but revenues are 140 billion riyals lower than estimates for 2014, said the statement read after a cabinet session chaired by Crown Prince Salman bin Abdulaziz.

The 2015 budget shortfall is the first deficit projected by the OPEC kingpin since 2011 and the largest ever for the kingdom.

Finance Minister Ibrahim al-Assaf said the kingdom was in good enough shape to see out the downturn.

"The challenge was bigger than expected. We continued to revise the budget figures as oil prices dived," Assaf told Saudi TV.

"Despite the deficit, we will continue to spend on development projects... We have the buffers to bear the drop."

A handout picture released by the Saudi Press Agency (SPA) on December 25, 2014 shows Saudi Oil and …

Assaf said everyone agreed oil would rebound and that it was only a question of when.

In the past decade, Saudi Arabia overspent budget projections by more than 20 percent and if the trend is maintained next year, analysts say the deficit will be much higher.

"I believe we are headed for a difficult year in 2015. I think the actual deficit will be around 200 billion riyals because actual revenues are expected to be lower than estimates," Saudi economist Abdulwahab Abu-Dahesh said.

"Spending in the budget is not in line with the sharp decline in oil prices."

The finance ministry also announced the 2014 preliminary actual budget figures, saying it expects a deficit of 54 billion riyals, the first shortfall since 2009.

The ministry said that, according to the preliminary figures, revenues in 2014 were at $278.9 billion, 22 percent higher than projected.

But spending was at $293.3 billion, the highest in the kingdom's history and about $33 billion more than expenditures in 2013.

The rise was due to huge expansion projects at Muslim holy sites in Mecca and Medina, an increase in spending on development and foreign aid.

The price of oil, which makes up around 90 percent of public income in Saudi Arabia, has lost about half of its value since June due to a production glut, weak global demand and a stronger US dollar.

In royal decrees issuing the budget, King Abdullah called for "rationalisation of spending" and for the "accurate and efficient implementation of the budget" in 2015.

If oil prices remain at the current level of about $60 a barrel for benchmark Brent crude, Saudi Arabia is expected to lose half of its oil revenues of $276 billion posted in 2013. Oil income this year is expected at $248 billion.

But the wealthy kingdom, which pumps about 9.6 million barrels per day, can easily tap into huge fiscal buffers, estimated at $750 billion, to meet the deficit.

King Abdullah authorised the finance minister to draw from the reserves or to borrow to meet the deficit.

Ratings agency Standard and Poor's lowered its outlook for Saudi Arabia to stable from positive following the oil price slide.

But it also affirmed its high ratings for Riyadh over the "strong external and fiscal positions" it has built up in the past decade.