Sen. Marco Rubio: GOP will 'look at all our options' to block Obama's new plan for U.S.-Cuba relations 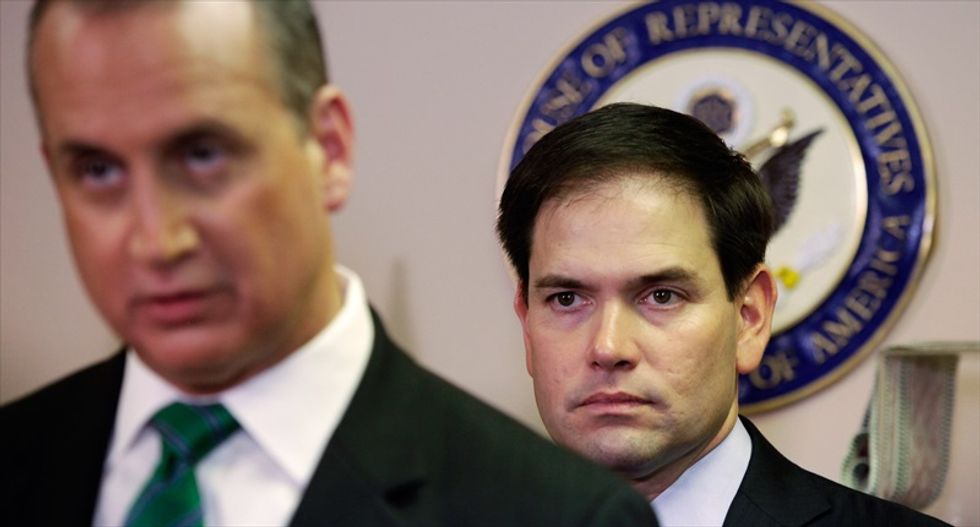 Republicans in Congress searched on Thursday for a strategy to sink or at least slow President Barack Obama's plan to normalize U.S. relations with Cuba, drawing a shrug from the White House.

They floated ideas to fight the Democrat Obama's moves to forge ties and expand commercial ties with the communist-led island after half a century of hostility. Their ideas included denying funds to reopen a Havana embassy and blocking the confirmation of a U.S. ambassador.

"We're going to look at all our options," Republican Senator Marco Rubio of Florida, a Cuban-American who has led the charge against the thaw in relations, said at a Miami news conference without providing specifics.

Many legal experts, and the White House, say Obama has broad executive powers to ease restrictions on commerce, transportation and banking, even if Congress objects.

"The steps that the president announced are steps that are well within his executive authority as president of the United States," White House spokesman Josh Earnest told reporters, adding he was "not particularly" worried about Republican opposition.

Earnest also said the White House would be willing to consider a possible precedent-shattering visit by Cuban President Raul Castro. On Wednesday, Earnest said Obama was open to a visit to Havana.

Fidel Castro, Raul's brother, was the last Cuban leader to visit the United States. He spoke to the Council on Foreign Relations in 1959 and in later years addressed the United Nations.

Mid-level U.S. diplomats visited Havana on occasion over the years while the countries cooperated on immigration, drug interdiction and oil-spill mitigation. Former U.S. President Jimmy Carter visited Havana in 2002 and 2011, long after he left office.

NO TIE TO HUMAN RIGHTS

Earnest and U.S. Assistant Secretary of State for Western Hemisphere Affairs Roberta Jacobson, who is expected to visit Cuba in January, said renewed relations were not directly tied to progress on human rights in Cuba.

"The president has had the leaders of both Burma and China to the United States," Earnest said. By meeting such leaders, the United States can better influence countries to respect universal human rights, he said.

Legal experts say Congress could not block the opening of a U.S. Embassy, since the U.S. Constitution gives the president – not the legislature – authority over diplomatic relations.

The United States has an Interests Section in the old U.S. Embassy building in Havana, and it would take little to adapt it. The Senate has left many other U.S. missions without ambassadors around the globe this year, as Republicans held up Obama’s nominations.

Other options include writing funding restrictions into a budget bill or trying to pass standalone legislation seeking to preserve Cuba’s isolation, such as a bill imposing more sanctions. Obama would almost certainly veto such legislation.

The biggest obstacle to normal ties with Cuba is a decades-old embargo. With Republicans due to take control of both houses of Congress in January, chances are slim of lawmakers scrapping all sanctions on Cuba soon.

Those sanctions are enshrined in law, most notably the Helms-Burton act passed in 1996.

Obama has called on Congress to repeal that law, although Republican leaders have said they will not allow any legislation to move in the House of Representatives that would ease the embargo.

Kentucky Senator Mitch McConnell, who will be the Senate Majority Leader in the new Congress, has yet to comment on the restoration of Cuban-American ties.