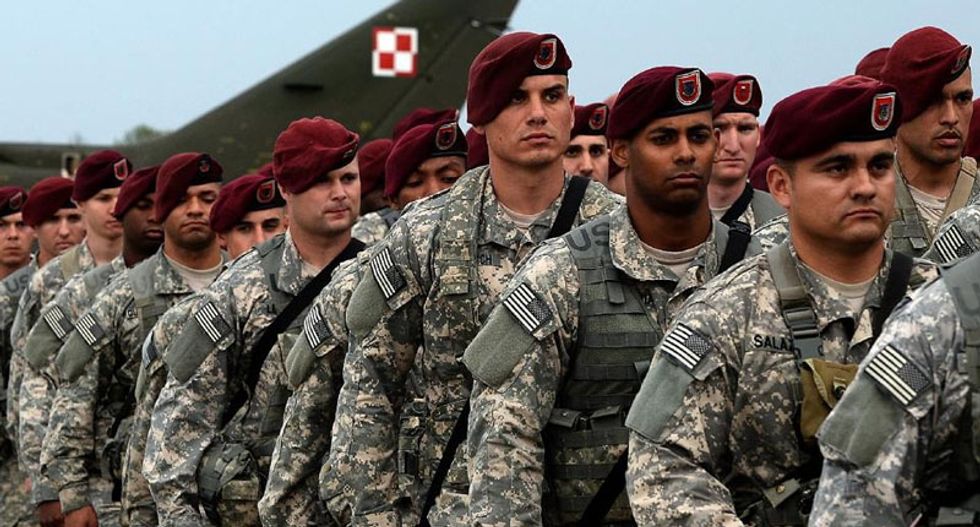 US troops arrive at the airport in Swidwin, Poland on April 23, 2014, after Washington said it was sending a force of 600 to the Baltic states as the Ukraine crisis deepened (AFP Photo/Janek Skarzynski)

Sexual assault victims in the US military say they are often ostracized by their peers or denied promotion by their commanders for reporting a crime to authorities, the Pentagon said, citing the results of a new survey.

Defense Secretary Chuck Hagel said the military had made "measurable progress" overall in countering the scourge of sexual assault but vowed to tackle the troubling trend of victims being subject to retaliation for notifying their commanders of an incident.

"When someone reports a sexual assault, they need to be embraced and helped, not ostracized or punished with retribution," Hagel told reporters.

Hagel, who recently announced his resignation as Pentagon chief, unveiled measures designed to counter retaliation against victims, including revised training for junior officers and "new procedures" for commanders.

"We must tackle this difficult problem head on, because, like sexual assault itself, reprisal directly contradicts one of the highest values of our military, that we protect our brothers and our sisters in uniform," he said.

The number of sexual assaults reported by US troops rose eight percent this year and more than 60 percent of victims complained they suffered some form of retaliation from fellow troops or supervisors, according to the report presented by Hagel.

An anonymous survey of troops found 62 percent of female victims said they faced repercussions. A previous survey two years ago found the same rate of retaliation -- more than 60 percent.

The report described "social retaliation," which included being ignored by colleagues or made to feel responsible for any negative changes in the unit, as well as "professional retaliation" -- with a victim losing privileges, denied promotion or training or transferred to a less favorable job.

However, the survey indicated the overall number of assaults appeared to be on the decline.

The report found that 19,000 service members said they faced unwanted sexual contact, down from 26,000 in a previous survey two years ago, said a defense official, who spoke on condition of anonymity.

More than half of the service members reporting assaults were men, it said.

Pentagon officials say the numbers were encouraging as it indicated the overall number of sexual assaults was decreasing while troops appeared more willing to come forward to report a crime.

The US military came under fire after a spate of embarrassing, high-profile sexual assault cases in the past three years, with President Barack Obama expressing outrage.

The Pentagon has adopted a flurry of initiatives to try to crack down on sexual assault, including changes meant to provide more legal protection and privacy for victims. But some lawmakers are pressing for a drastic reform of the military justice system beyond what Congress has already approved.

Hagel said there were positive signs that recent initiatives were making a difference.

"We believe that our efforts to prevent sexual assault are beginning to have an impact," he said.

"Overall, the data shows that while there have been indications of real progress, measurable progress over the last two years... we still have a long way to go."

Heavy drinking is often blamed for fueling assaults and Hagel has ordered a sweeping review of alcohol policies as well.