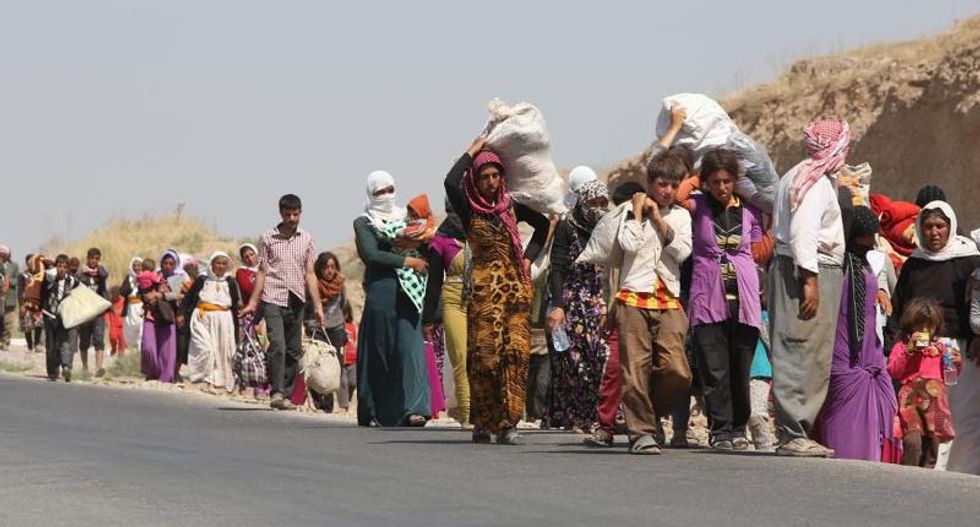 Displaced Iraqi families from the Yazidi community cross the Iraqi-Syrian border at the Fishkhabur crossing, in northern Iraq, on August 13, 2014 (AFP Photo/Ahmad al-Rubaye)

Women and girls from Iraq's Yazidi religious minority forced into sexual slavery by the Islamic State jihadist group have committed suicide or tried to, Amnesty International said on Tuesday.

IS militants have overrun swathes of Iraq since June, declared a cross-border caliphate also encompassing parts of neighbouring Syria, and carried out a litany of abuses in both countries.

The group has targeted Yazidis and other minorities in north Iraq in a campaign that rights group Amnesty said amounted to ethnic cleansing, murdering civilians and enslaving others for a fate that some captives consider even worse than death.

"Many of those held as sexual slaves are children -- girls aged 14, 15 or even younger," Donatella Rovera, Amnesty's senior crisis response adviser, said in a statement.

Amnesty said that many of the perpetrators are IS fighters, but may also include supporters of the group.

A 19-year-old named Jilan committed suicide out of fear she would be raped, Amnesty quoted her brother as saying.

A girl who was held with her but later escaped confirmed the account, saying: "One day we were given clothes that looked like dance costumes and were told to bathe and wear those clothes. Jilan killed herself in the bathroom."

"She cut her wrists and hanged herself. She was very beautiful; I think she knew she was going to be taken away by a man and that is why she killed herself."

Another former captive told the rights group that she and her sister tried to kill themselves to escape forced marriage, but were stopped from doing so.

"We tied... scarves around our necks and pulled away from each other as hard as we could, until I fainted… I could not speak for several days after that," Wafa, 27, told the rights group.

Amnesty also recounted the story of 16-year-old Randa, who was abducted with her family and raped by a man twice her age.

"It is so painful what they did to me and to my family," Randa said.

Rovera said: "The physical and psychological toll of the horrifying sexual violence these women have endured is catastrophic.

"Many of them have been tortured and treated as chattel. Even those who have managed to escape remain deeply traumatised."

A US-led coalition has been carrying out a campaign of air strikes against IS in Iraq and Syria in an attempt to halt the group's advance.