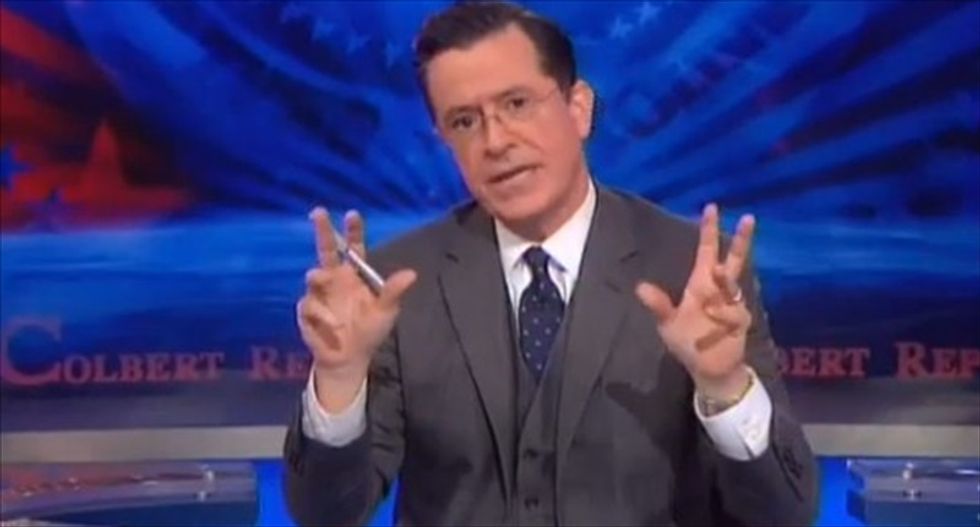 Instead of "pussyfooting around" during his last show, Stephen Colbert dove head on into the subject of The Colbert Report's legacy on Thursday.

"Ultimately, I believe history will be my judge," Colbert explained. "So I'm gonna tell history what to say."

Appropriately, the final "Word" was, "Same to you, pal."

"In the annals of history -- or whatever orifice they stuff it in -- let no one say what we did together was not important, or influential, or importulential," he said.

From the start of the show, he explained, his goal was to live up to the name of his home network, "Influence Central."

"If all we achieved over the last nine years was to come into your home each night and help you make a difficult day a little bit better, man, what a waste," Colbert said. "'Nation,' I want you to know, if I had to do it all again, if I could do it with you, I would do it the same."

Instead about bragging about changing the world, Colbert said, he was proud to have "samed the world"

"Does that sound stupid? Well, they said I sounded stupid back in 2005, so that's the same," he argued, before explaining his point.

"Another Bush governor is running for the White House," he said. "People on TV are defending torture" -- as the screen added, "And on Fox, inflicting it."

Technically, he said, his show could be considered a revolution, since the country has moved "360 degrees right back to where we were."

Colbert also assured his fans to stay afraid, but not to worry, and reminded them that truth came from their guts, instead of their heads, as he said in 2005 when he introduced the segment by defining "Truthiness."

"Back then, my gut made you a promise," he said, before showing footage of his vow to make viewers trust their own guts.

"And you did," he said on Thursday. "'Cause the truthiness is, all those incredible things people say I did -- running for president, saving the Olympics, Colbert super PAC, treadmill in space, the Rally to Restore Sanity and/or Fear and/or Cat Stevens' career -- none of that was really me. You, the 'Nation' did all that; I just got paid for it."

He also had advice for the newest of possible new viewers.

Watch Colbert's final "Word," as posted online on Thursday, below.