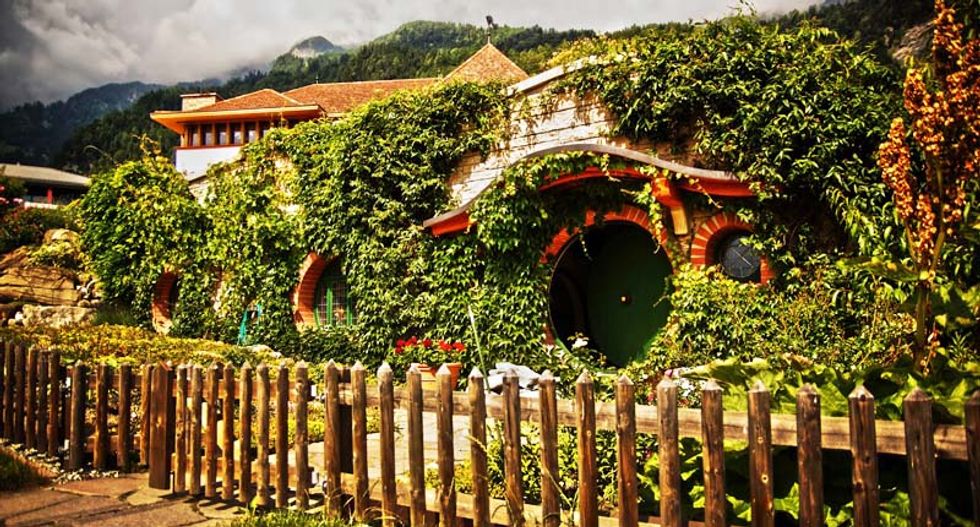 Located in the tiny village of Jenins (pop. 914) -- about an hour’s drive southeast of Zurich -- the 36,000-square-foot Greisinger Museum offers visitors 11 rooms to explore, each representing a different location in Tolkien’s fantasy world.

The museum is a work of love created by Bernd Greisinger who has accumulated what is considered by many Tolkien experts to be the world’s largest trove of Middle-earth collectibles, with 3,500 books and 600 artworks.

“It’s the only museum whose sole aim is the promotion of Tolkien, Tolkien’s works and subsequent adaptations,” said Shaun Gunner, head of the British-based Tolkien Society. “There is an unrivaled collection of rare books and collectibles.”

Arriving at the museum, visitors are greeted by the familiar round doors of the Hobbit shire, measuring only five feet tall.

Tours begin in the Hobbit hole, where viewers observe furnishings including rustic hand-carved wooden chairs scattered around a fire­place and a large writing desk piled with maps of Middle-earth.

“We want to give people the feeling that they’re in the right place, what it feels like to be inside a Hobbit hole,” Mr. Greisinger said.

Tour guides lead visitors through intricately designed rooms evoking setting and scenes from the popular fantasy series. The Gondor room, spans two floors with a spiral staircase and white columned pillars; the Wilderland room offers custom-built statues in the likeness of the Gates of Argonath, while a 13-foot-tall installation of a fearsome Balrog creature looms in the Moria room.

Visitors can also view a number of Tolkien collectibles, including a chandelier from the author's seaside bungalow in England, and the 1969 Ken Rudolph calendar -- the first ever Tolkien fan art calendar -- published with signed artwork by the Tolkien illustrator Tim Kirk.

Multiple rare books from Greisinger’s collection are also on display. Private viewing of other rare books are available by appointment.

The museum, which opened in October 2013, has only seen about 3,000 visitors so far, however the creator expects that number to rise considerably with this month’s release of the final installment of Peter Jackson’s Hobbit trilogy, “The Hobbit: The Battle of the Five Armies.”

Speaking of the Lord of the Rings film series, Greisinger said he wants to expand upon director Jackson's vision.