Tamir Rice's mother: 'I'm looking for a conviction' for police officers who killed my son 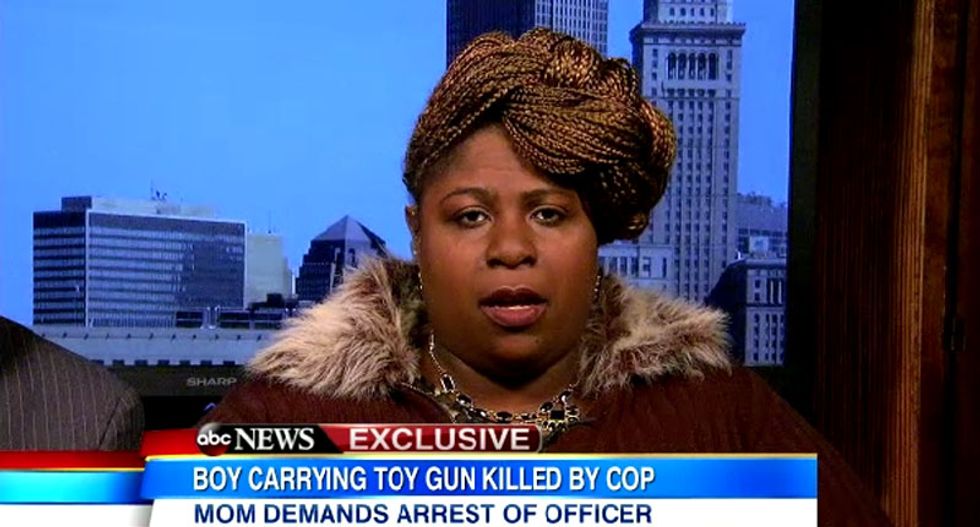 The mother of a 12-year-old Cleveland boy fatally shot by police last month broke her silence on Monday, saying the officers involved should be criminally convicted.

"I’m looking for a conviction for both of the officers," Samaria Rice, the mother of Tamir Rice, said on ABC's "Good Morning America" program.

Tamir Rice, who was black, was shot in a Cleveland park while carrying what turned out to be a replica gun that typically fires plastic pellets. His death came at a time of heightened national scrutiny of police use of force, especially against African-Americans.

Rice's family filed a suit last week against the city of Cleveland and both Timothy Loehmann, the officer who shot Rice, and Frank Garmback, who was driving the car. Rice was shot on Nov. 22 less than two seconds after the police car pulled up beside the boy at a park.

The city has declined to comment on the lawsuit.

Rice sat with her attorney, Benjamin Crump, who has also represented the family of Michael Brown, the unarmed black teenager whose fatal shooting by police in Ferguson, Missouri, led to months of protests.

In the Brown case, as well as a New York case involving the death of a black man during an arrest, grand juries declined to indict the officers involved.

The Rice family has issued statements about the shooting in the past, but the ABC interview was the first time Rice's mother had spoken publicly. She also planned to speak to reporters in Cleveland later on Monday.

Asked what happened the day her son died, Rice said: “Two little boys came and knocked on my door ... and said police just shot your son twice in the stomach,” Samaria said.

Rice said her son was loved by every one. “He was a bright child and he had a promising future,” she said.

Both officers involved in the shooting are on administrative leave and the shooting is being investigated by Cleveland authorities. The case will go to a grand jury for possible charges.