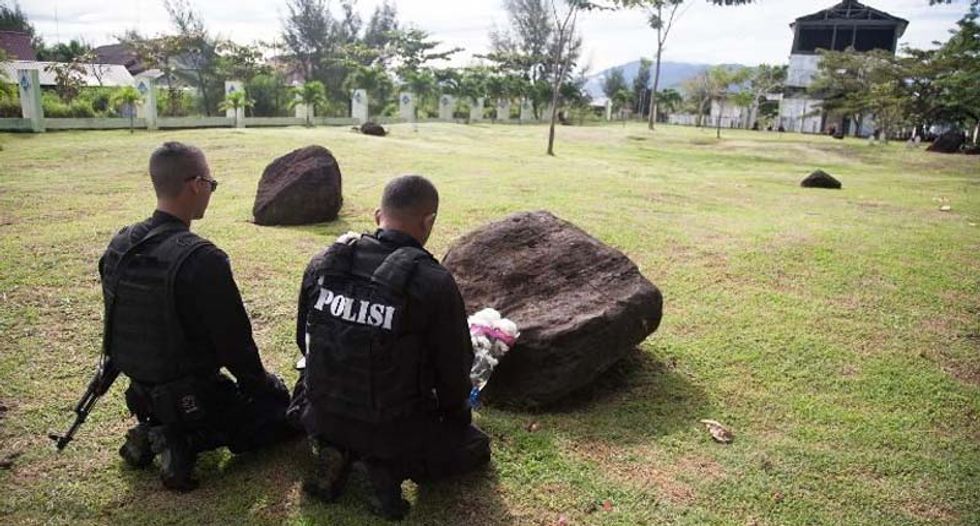 Policemen pray for their dead friends and relatives at a mass grave for victims of the December 26, 2004 tsunami, in Banda Aceh, northern Sumatra, on December 26, 2014 - AFP

Prayers, tears and solemn visits to mass graves marked commemorations Friday across tsunami-hit nations for the 220,000 people who perished when giant waves decimated coastal areas of the Indian Ocean a decade ago.

On December 26, 2004 a 9.3-magnitude earthquake off Indonesia's western tip generated a series of massive waves that pummelled the coastline of 14 countries as far apart as Indonesia, Thailand, Sri Lanka and Somalia.

Among the victims were thousands of foreign tourists enjoying Christmas in the region, carrying the tragedy of an unprecedented natural disaster into homes around the world.

A chorus of voices singing the Indonesian national anthem opened the official memorial at a 20-acre park in Indonesia's Banda Aceh -- the main city of the province closest to the epicentre of the massive quake and which bore the brunt of waves towering up to 35-metres (115 feet) high.

"Thousands of corpses were sprawled in this field," Indonesian Vice President Jusuf Kalla told the crowd of several thousand -- many among them weeping.

"Tears that fell at that time... there were feelings of confusion, shock, sorrow, fear and suffering. We prayed.

"And then we rose and received help in an extraordinary way. Help came from Indonesia and everyone else, our spirits were revived," he said, hailing the outpouring of aid from local and foreign donors.

Mosques also held prayers across the province early Friday while people visited mass graves -- the resting place of many of Indonesia's 170,000 tsunami dead.

But a Red Cross display of hundreds of salvaged ID documents and bank cards, also served as grim reminder that many victims simply vanished.

In southern Thailand, where half of the 5,300 dead were foreign tourists, a smattering of holidaymakers gathered at a memorial park in the small fishing village of Ban Nam Khem, which was obliterated by the waves.

As the ceremony began, survivors recounted stories of horror and miraculous survival as the churning waters, laden with the debris of eviscerated bungalows, cars and boats, swept in without warning, killing half of the village's inhabitants.

Swiss national Raymond Moor said he noticed something was amiss when he saw a white line on the horizon rushing towards the beach where he and his wife were having breakfast.

"I told my wife to run for her life... it wasn't a wave but a black wall," he said, describing being caught up in the water moments later like "being in a washing machine".

"A Thai woman from the hotel saved my life by pulling me up to a balcony. She died later," he said, breaking into tears. Moor's wife survived.

Nearby, Thai Somjai Somboon, 40, said she was yet to get over the loss of her two sons, who were ripped from their house when the waves cut into Thailand.

"I remember them every day," she told AFP, also with tears in her eyes, adding "I will always miss my sons."

Among the international commemorations, in Sweden, which lost 543 to the waves, the royal family and relatives of those who died will attend a memorial service in Uppsala Cathedral Friday afternoon.

Disaster-stricken nations struggled to mobilise a relief effort, leaving bloated bodies to pile up under the tropical sun or in makeshift morgues.

The world poured money and expertise into the relief and reconstruction, with more than $13.5 billion collected in the months after the disaster.

Almost $7 billion in aid went into rebuilding more than 140,000 houses across Aceh, thousands of kilometres of roads, and new schools and hospitals.

The disaster also ended a decades-long separatist conflict in Aceh, with a peace deal between rebels and Jakarta struck less than a year later.

In Sri Lanka, where 31,000 people perished, survivors and relatives of the around 1,000 who died when waves derailed a passenger train, boarded the restored Ocean Queen Express and headed to Peraliya -- the exact spot where it was ripped from the tracks, around 90 kilometres (56 miles) south of Colombo.

Ahead of the ceremony one of the train guards told AFP a lack of knowledge of tsunamis led to needless deaths.

"We had about 15 minutes to move the passengers to safety. I could have done it. We had the time, but not the knowledge," 58-year-old Wanigaratne Karunatilleke said.

A pan-ocean tsunami warning system was established in 2011, made up of a network of sea gauges, buoys and seismic monitors, while individual countries have invested heavily in disaster preparedness.

But experts have cautioned against the perils of "disaster amnesia" creeping into communities vulnerable to natural disasters.