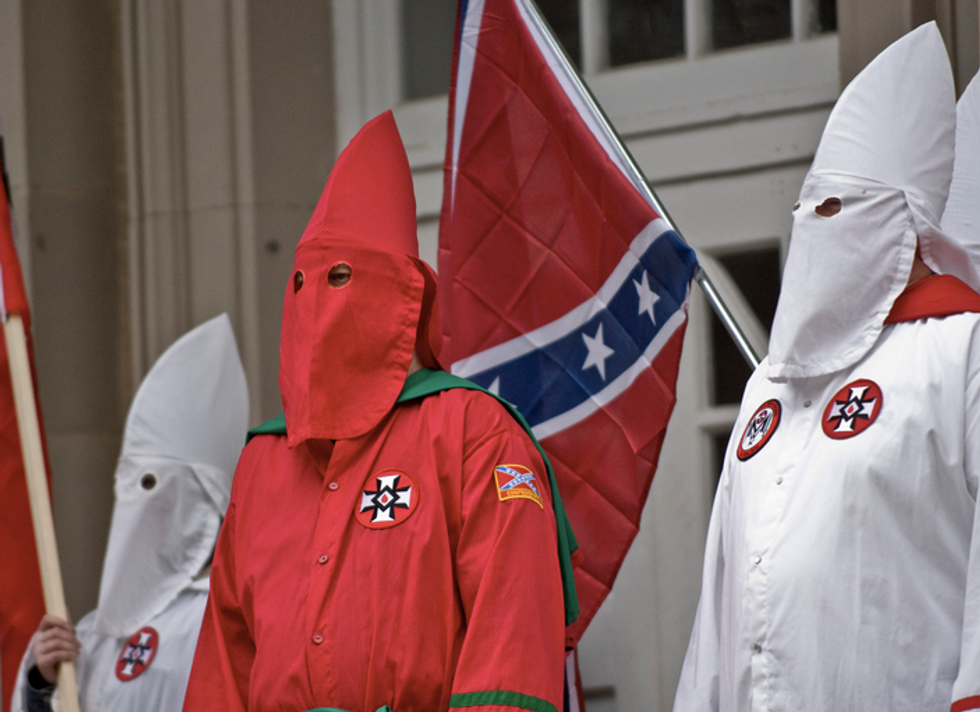 A Texas school official got himself into some hot water this week over a Facebook posting that celebrated the KKK. Hooks Independent School District board member Chris Harris apologized for posting the image, which showed a hooded Klan member with the caption, "I'm dreaming of a White Christmas."

In his apology, Harris said he had posted the image as a joke and then had realized it was a mistake. "I am by no way racist," he wrote in his apology. The school board will meet on December 15 to decide if Harris will remain a member of it.

But in the meantime, we've learned more about the Facebook conversation that took place when Harris posted the KKK image. And it contains many other cases of Harris making remarks and posting images that denigrate African-Americans.

The incident began a week ago on Monday night, after the decision of the Ferguson, Missouri grand jury not to indict police officer Darren Wilson in the shooting death of unarmed teenager Michael Brown.

A young woman posted a reaction to that decision at her Facebook page, and then her friends began making comments. One of them was Chris Harris. These were among the comments and images he posted during that Facebook conversation... 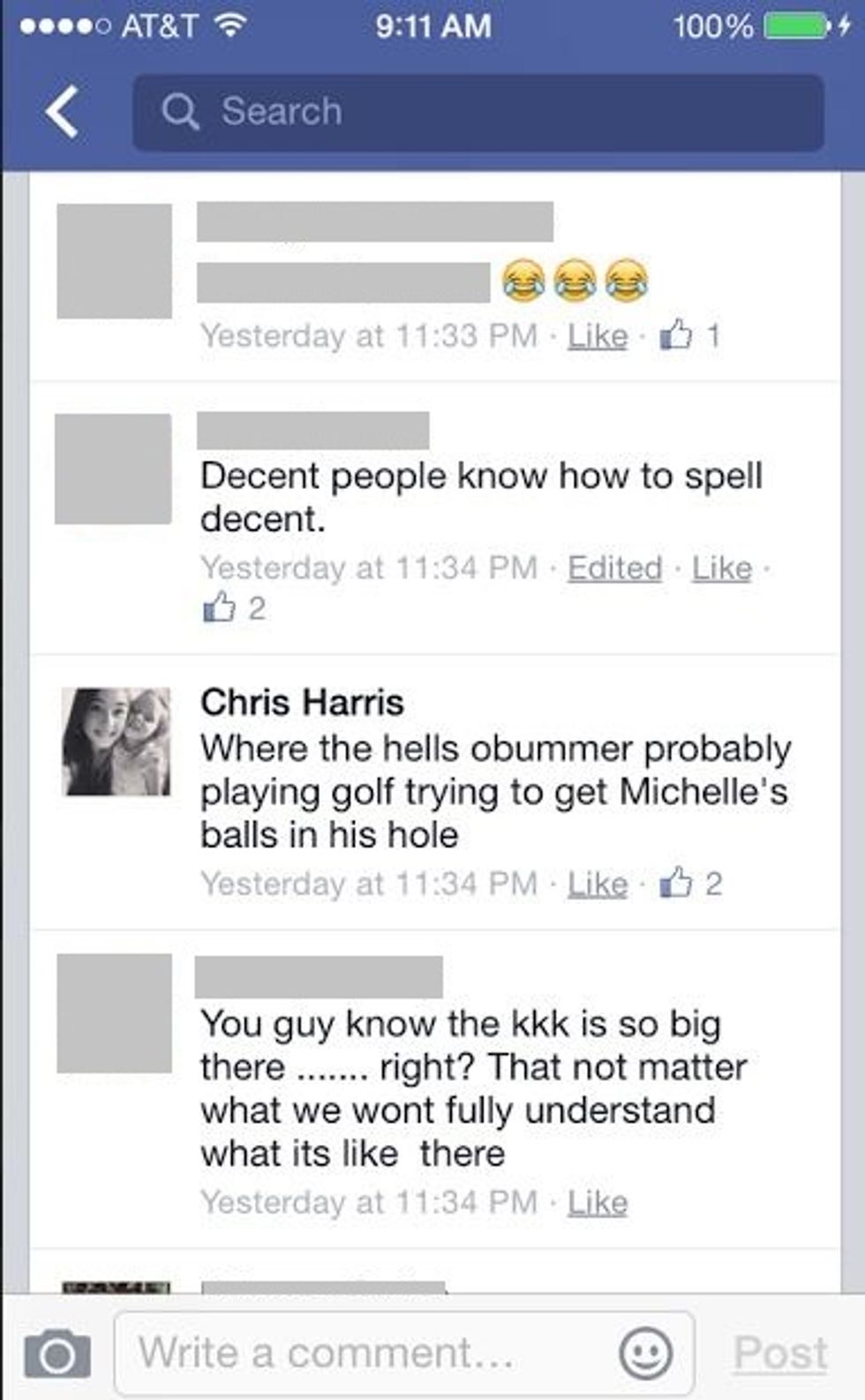 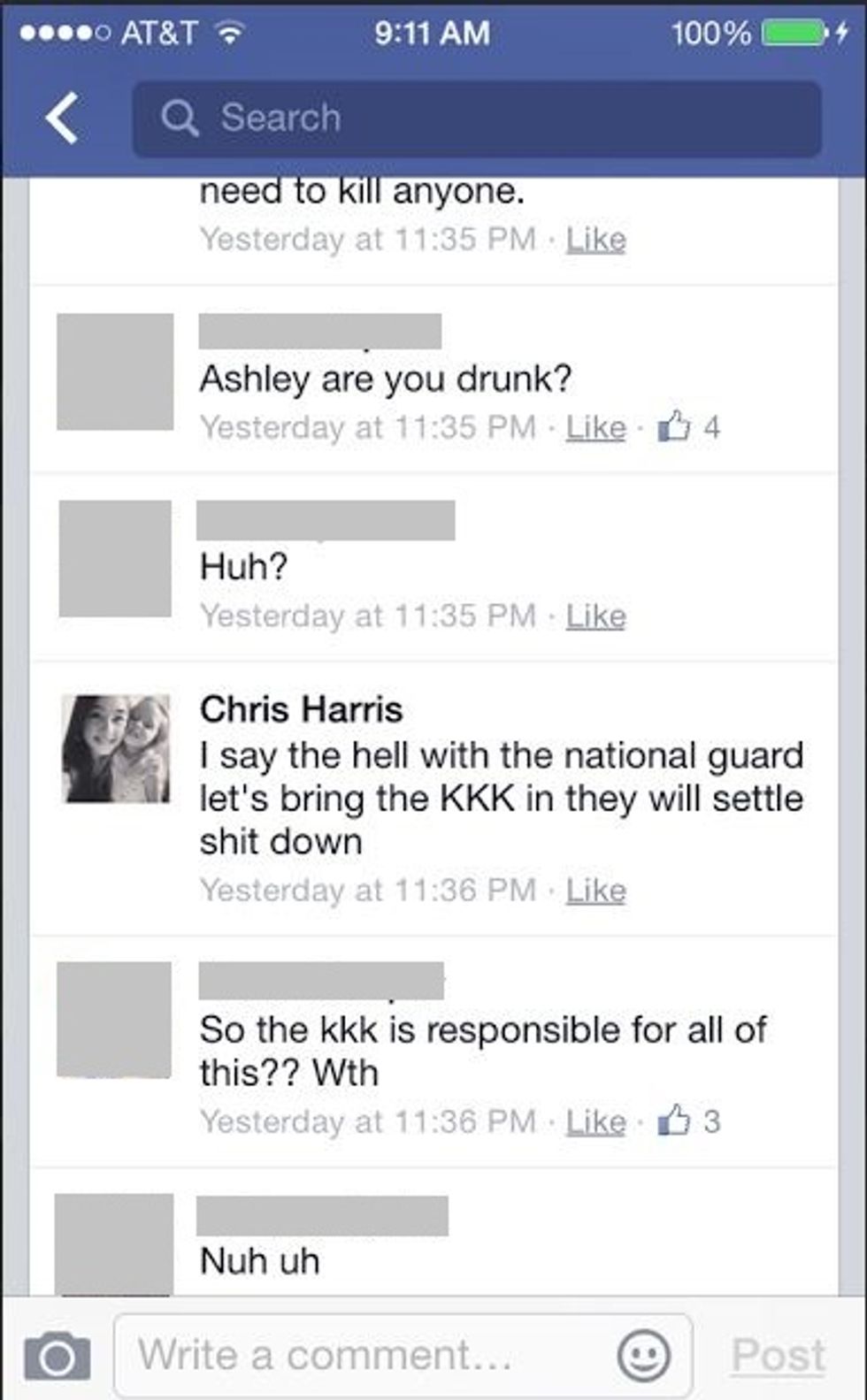 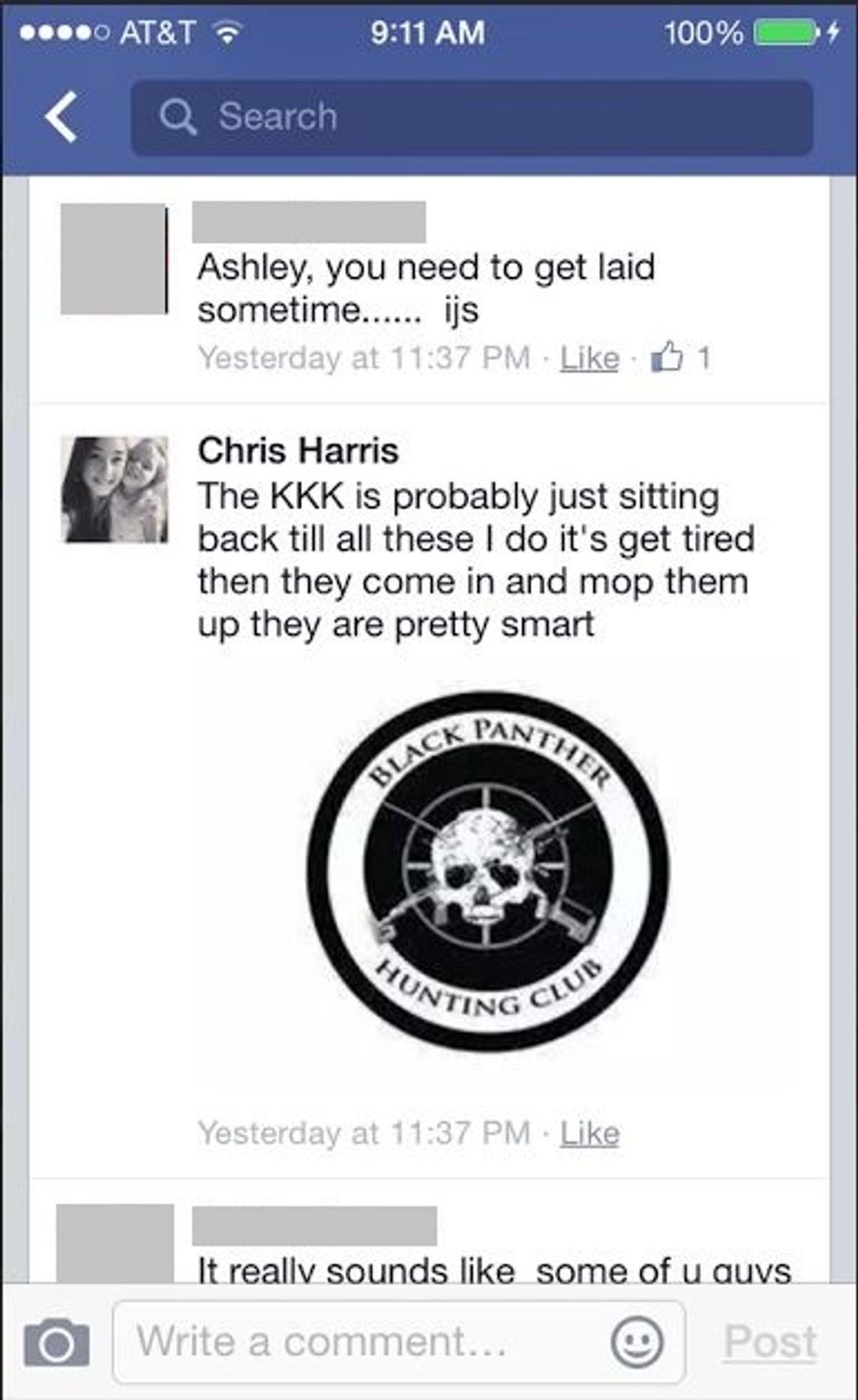 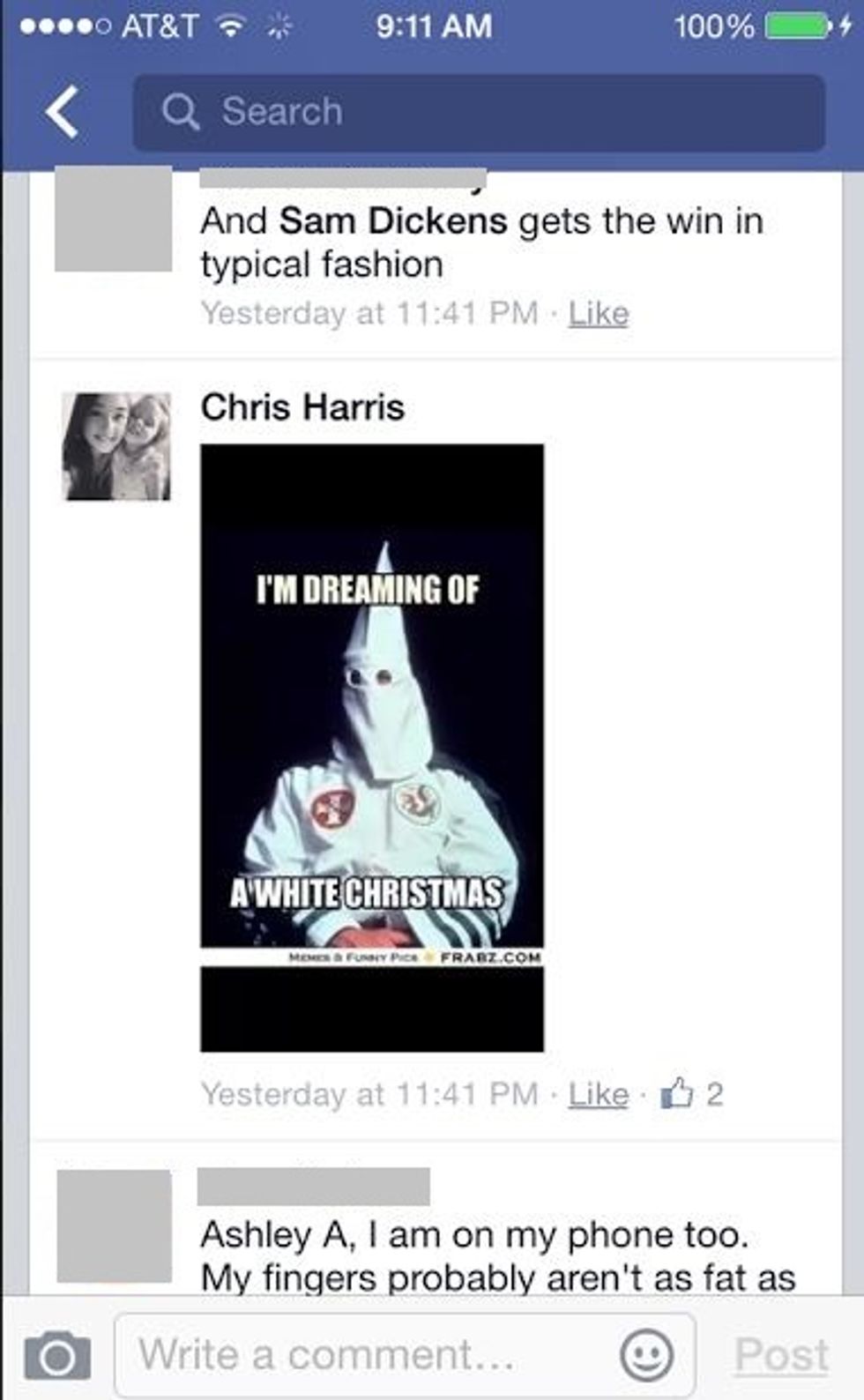 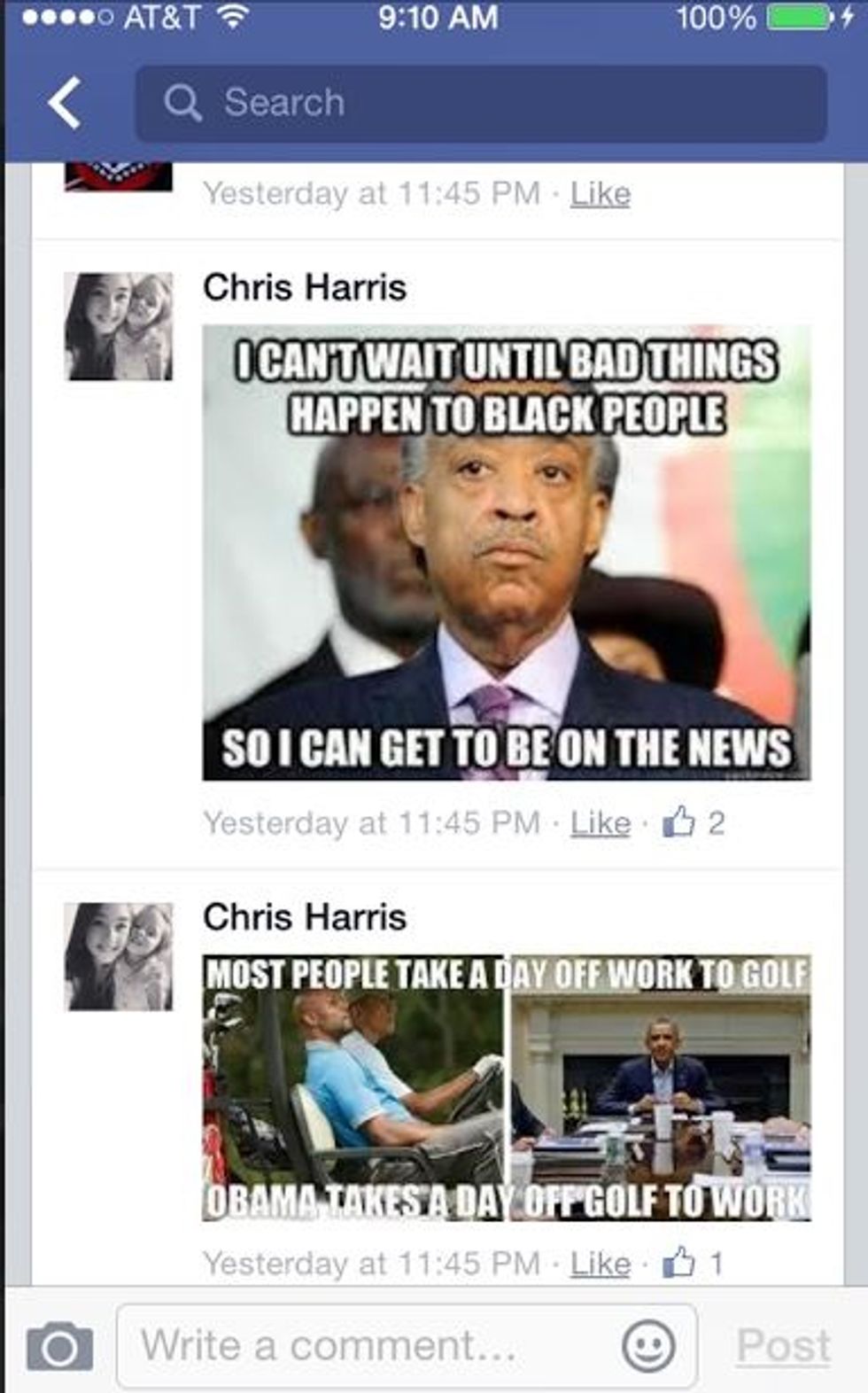 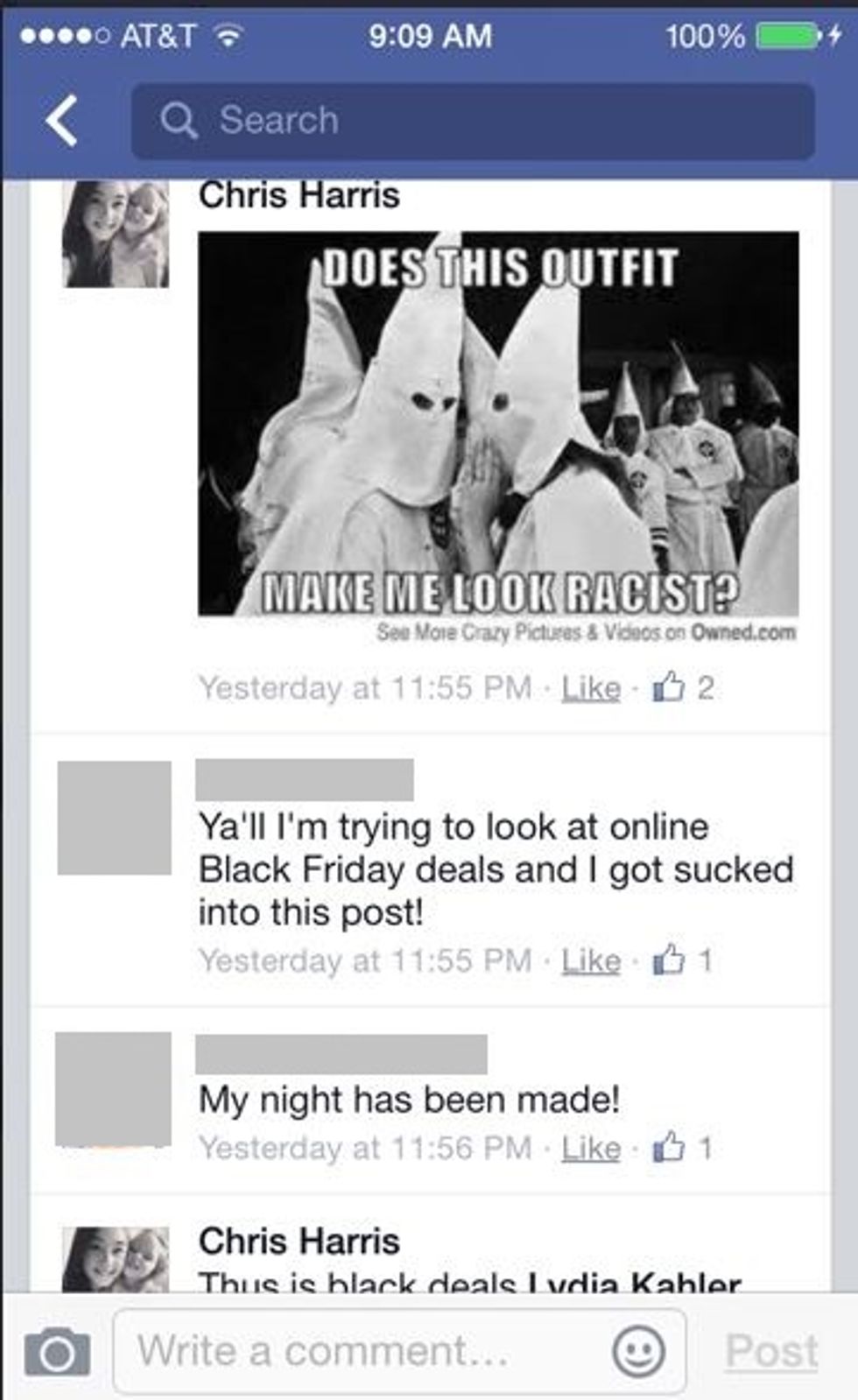 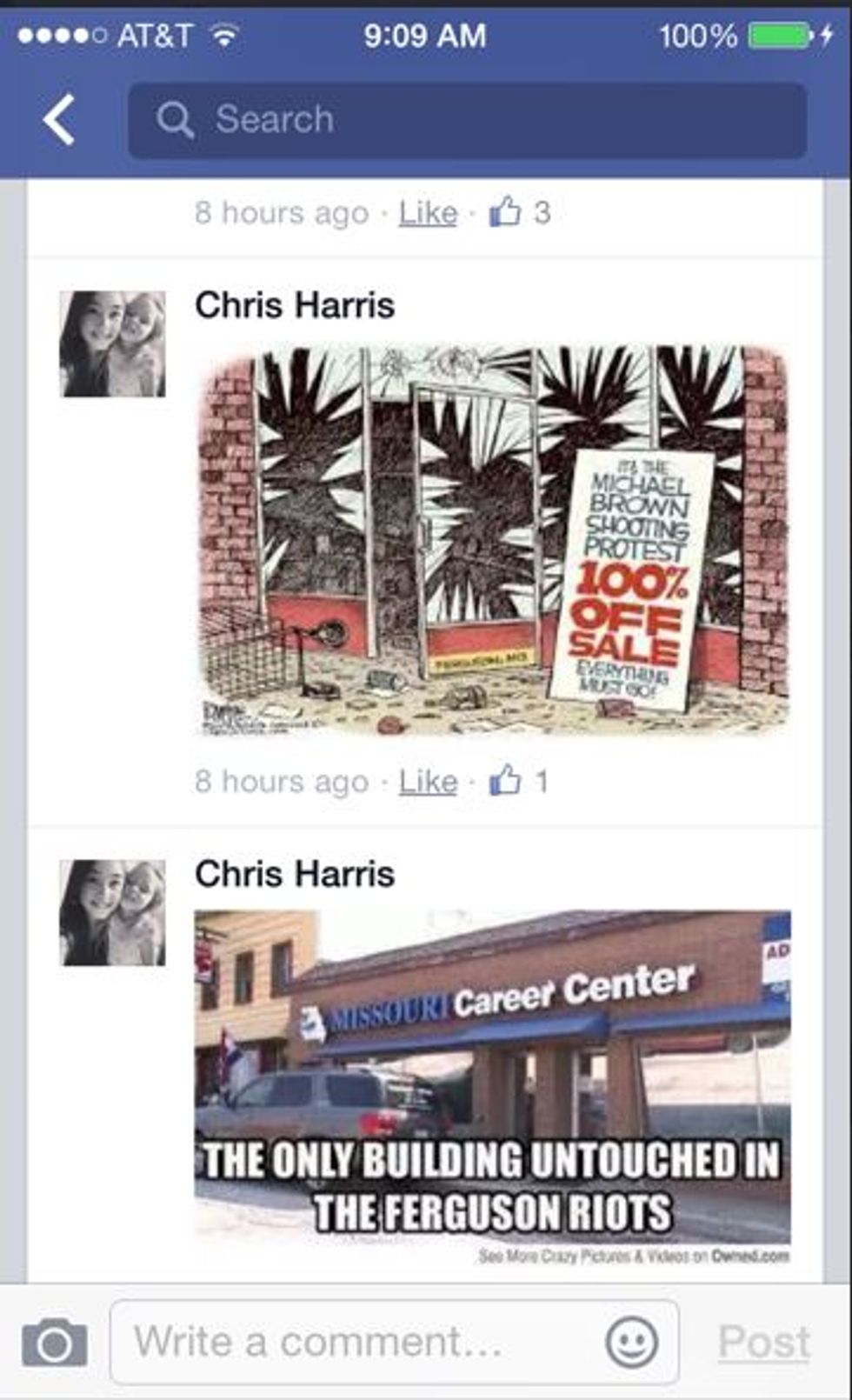 A local resident who took objection to what Harris was saying then entered the conversation.

"That's when I chimed in, saying it really wasn't too funny," the man tells us, after confirming the screen shots which we had received independently. "He went on to tell me he could kick my ass, and told me 'I'm a member of the NRA.' I didn't even know him, I was just offended by what he was posting. It was real insensitive after a young man had been killed."

Here are a couple of screenshots of that part of the conversation... 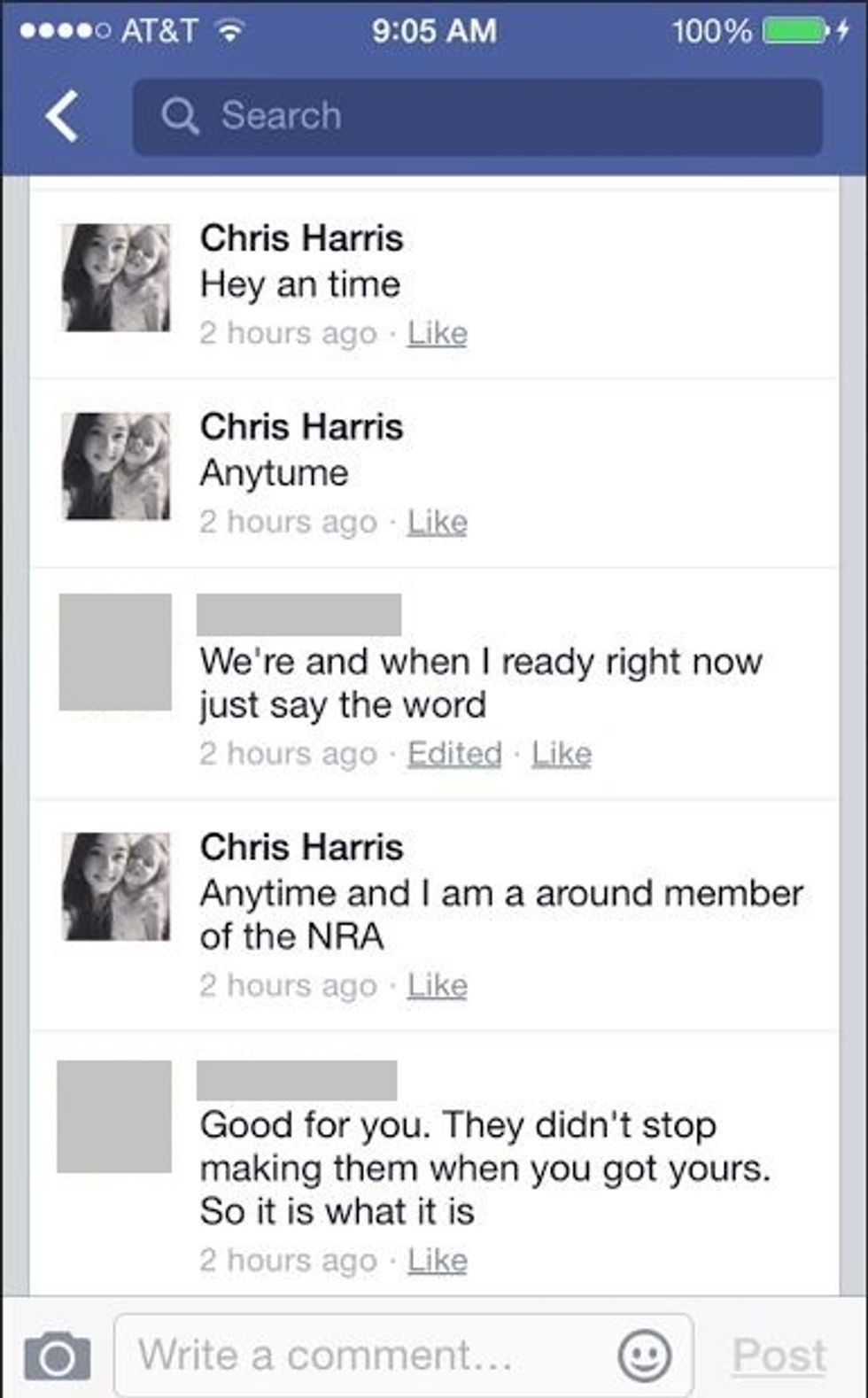 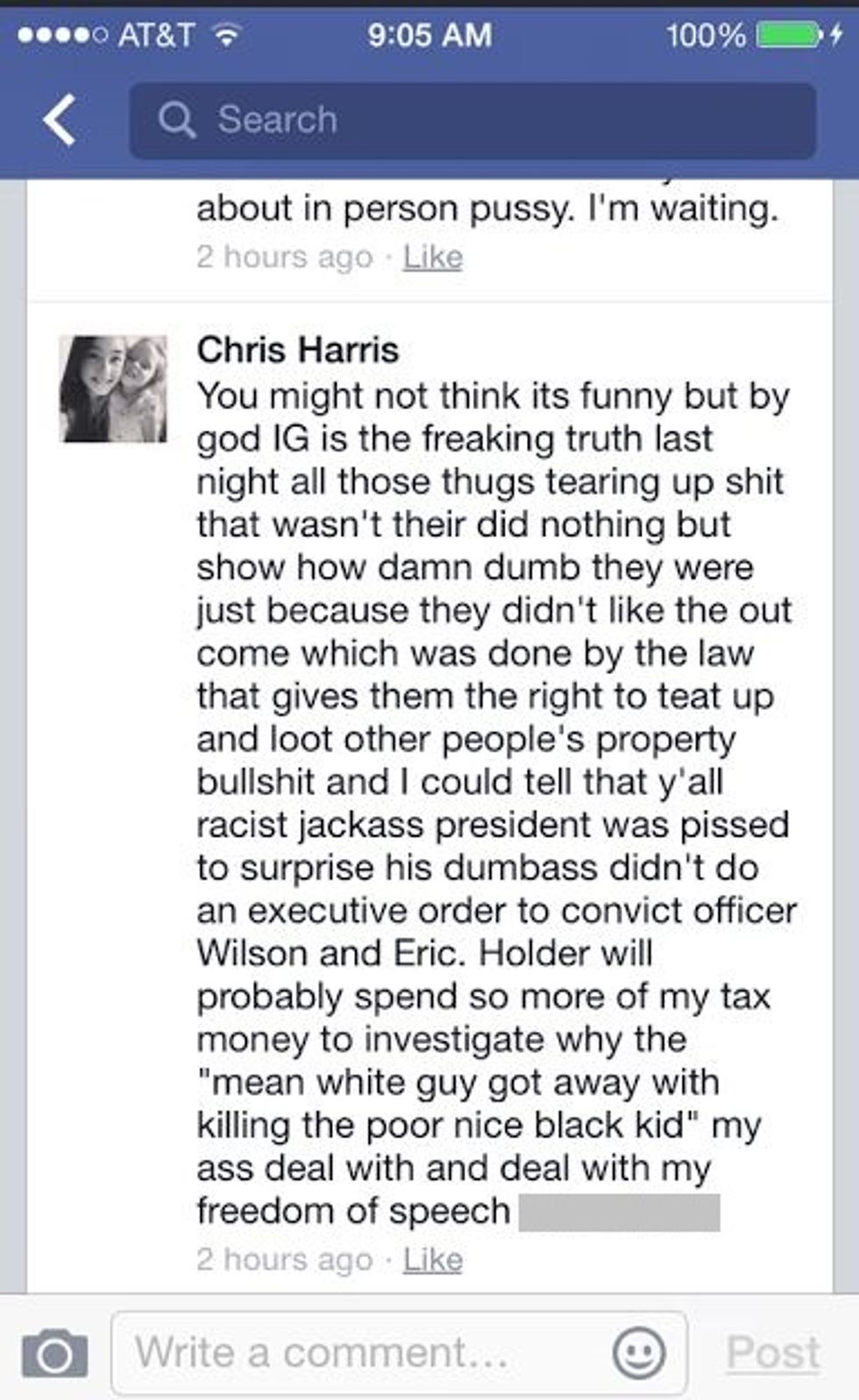 Over the weekend, former Hooks, Texas resident Jared Smith spotted the Facebook conversation and was stunned. He posted the KKK image to his blog, as well as a copy of the apology Harris had posted the day after the original conversation... 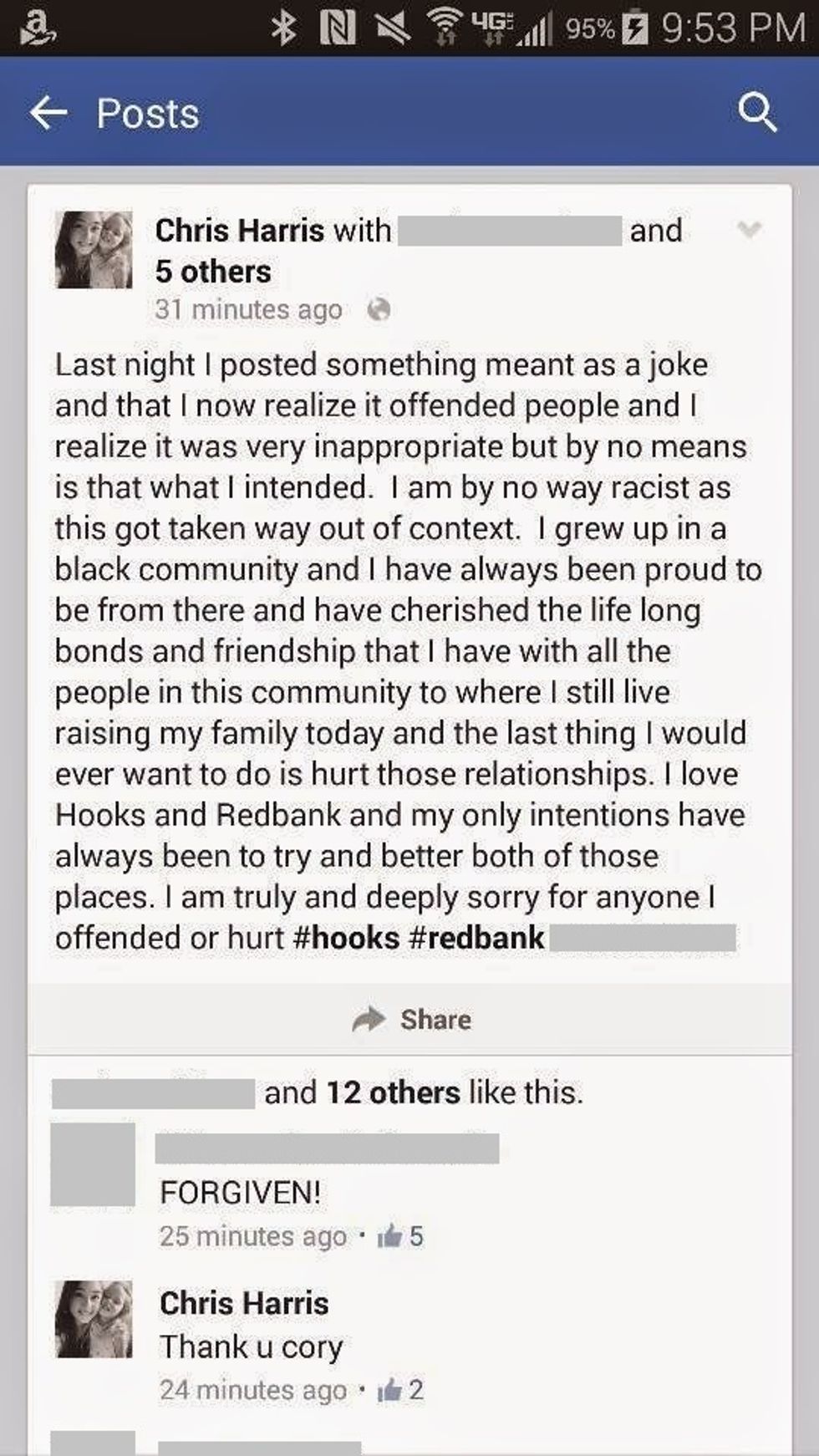 After Smith posted the screenshots to his blog, the story was picked up by television station KTLA and then it began to go national.

But until now, the other images and statements by Harris weren't revealed -- Harris had erased his Facebook account, and he wasn't speaking to the press. (We left a message for him today and haven't heard back.)

We don't know if Hooks ISD Superintendent Ronnie Thompson has seen the full Facebook conversation. We left a message for him and will update this story if we hear from him.

UPDATE: We have spoken with Hooks ISD superintendent Ronnie Thompson, who told us that Harris submitted his resignation on Wednesday. The school district put out this statement:

Chris Harris, a current Hooks ISD board member, released on social media statements which have been characterized as racially sensitive. Mr. Harris has removed the posts and replaced them with an apology. The Board is conferring with legal counsel regarding what actions, if any, may be taken by the Board. The statements made by Mr. Harris are not reflective of the Board or the district. Mr. Harris is not an employee of the school district; he is a publicly elected official whose term expires in May 2015. Mr. Harris has submitted his resignation as of December 3, 2014. Hooks ISD school board will have a special called meeting to accept the Mr. Harris resignation and discuss options for appointing a board member to fill the vacancy. Until such time as the Board meets on December 8, 2014, the district will have no further comment.