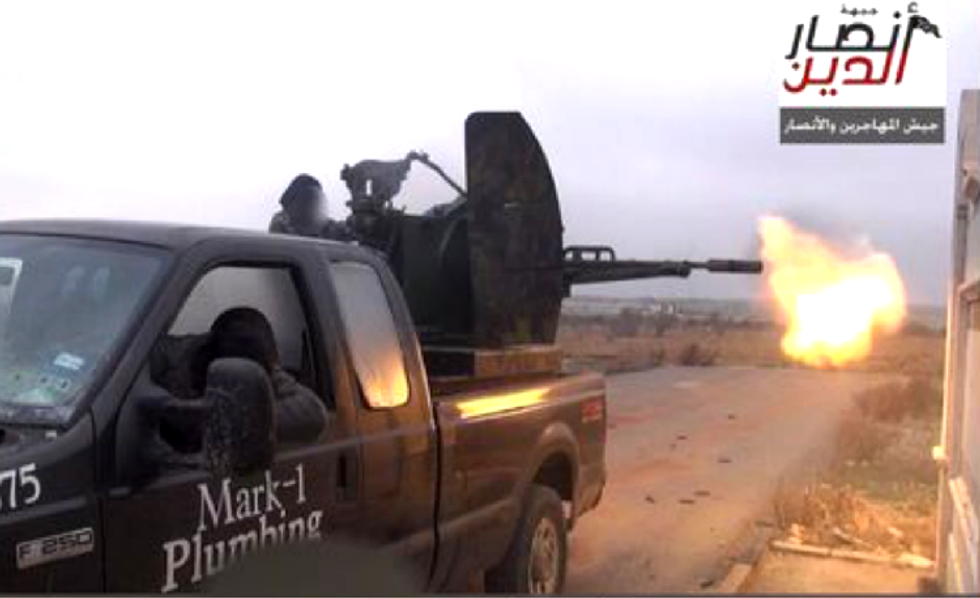 A Texas plumber says he has no idea how his old company truck ended up in a jihadi photo from the front lines of the war in Syria produced by the militant group ISIS.

The New York Daily News reported that Mark Oberholtzer of Texas City traded the company car in at a dealership in 2013 and hadn't thought of it since.

On Monday, however, the Ansar al-Deen Front, a Syrian militant group, posted a photo featuring the black Ford F-250 pickup with an anti-aircraft gun mounted on the truck bed and the logo of Oberholtzer's Mark-1 Plumbing Company and contact information emblazoned on the doors.

The business has received thousands of calls, faxes and emails, he said, some very disturbing.

"A few of the people are really ugly," he said.

The last time he saw the truck was when he traded it in at a Ford AutoNation dealership in October of 2012. Oberholtzer said he forgot to remove the door decals, but figured the dealership would take care of it.

"They were supposed to have done it and it looks like they didn't do it. How it ended up in Syria, I'll never know," he said to CBS News.

"To think something we would use to pull trailers, now is being used for terror, it's crazy. Never in my lifetime would think something like that," said Oberholtzer's son Jeff.

A spokesperson for AutoNation told the Daily News that the truck was probably sold at auction and had changed hands many times before ending up in the hands of violent Islamic extremists.

Oberholtzer told KHOU that neither he nor any member of his family supports Islamic terrorism or any other kind.

"We had no intentions or no idea that this would even happen," he said. "I just want this to go away, to tell you the truth."