The unsavory motivations of the Shakespeare truthers 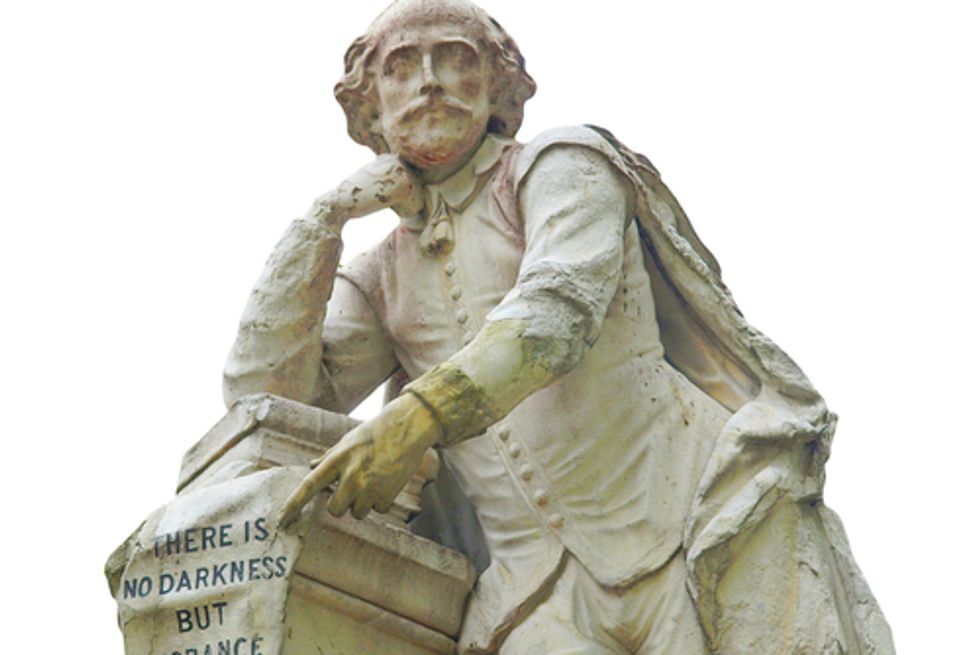 Newsweek has a surprisingly sympathetic piece about Shakespeare truthers, republished here at Raw Story, and I just have to take some time to point out that, like with other conspiracy theories and denialist obsessions, there's more going on here than some kind of legitimate dispute over the facts. For those who are unaware, Shakespeare truthers are people who believe that William Shakespeare was just a half-literate actor who was the cover story for some no doubt wealthy nobleman who secretly wrote the plays and didn't want credit because, as we all know from our fairy tales, wealthy noblemen are noble, honorable creatures who have small egos and little desire for respect and adulation.* Newsweek treats the controversy as if it were mostly one of competing camps who are arguing over facts, with only a whiff of acknowledgement of the political forces that are driving this controversy and always have. The one acknowledgement is dismissive: "Yet no matter how much the scholastic Shakespeare establishment insists that the doubters are fruit loops, flat-earthers or simply snobs, who can’t bear the idea that the world’s greatest poet was a mere grammar school boy and not a glamorous aristo, the case against Shakespeare is as vociferous today as at any time since it first gained credence in the mid-19th century."

The implication that a theory cannot be crackpot because it persists is handily disproven by the existence of all major religions. The same political desires that drove Shakespeare trutherism back in the day have not gone away, however. It's still fueled by an unsavory classism and hostility to bohemianism that manifests in an unwillingness to accept that someone could develop as a great poet without a formal education but merely by practicing through his work as a writer and actor. Robert Gore-Langton, who wrote this piece, however, tries to distract from that by appealing to authority:

Apart from a sizeable community of dandruffy amateur code-breakers and anagram-spotters looking for clues as to the identity of the real author, the doubters’ camp can also boast some world-class minds down the years, including Sigmund Freud, Mark Twain, Henry James, Charles Dickens and historian Hugh Trevor-Roper, who found the case for reasonable doubt about the author’s identity “overwhelming” (though it should be pointed out that Trevor-Roper also famously believed the forged Hitler diaries were genuine). Every time a book asserts Shakespeare was the true author, another one of apparently equal erudition comes out saying, “Where’s the evidence?”

The notion that being an educated or erudite person precludes being suckered by bullshit is bound up in the same knee-jerk respect for wealth and authority that gives rise to Shakespeare trutherism to begin with. Granted, Mark Twain is a bit of a surprise in there, but he wrote his anti-Shakespeare screed a year before he died, deep into his cranky old rich man years. Wealthy, educated people are just as prone as any other group of people to falling for conspiracy theories that flatter their sensibilities, and a conspiracy theory that purports to prove that great poets cannot come from the masses just so happens to be exactly what many rich, educated people want to hear.

Sure, there's probably some Shakespeare truthers out there who are just the kind of people who get sucked into conspiracy theories and historical "mysteries" . But, as is generally true with these things, conspiracy theories generally stem from ideologies and political agendas. Shakespeare trutherism is actually quite a bit like Obama birtherism. Both are conspiracy theories accusing someone of not being who they say they are, and both are there to serve the larger belief that the person in question, by virtue of his supposedly low birth, does not deserve his fame and authority. To be clear, there are definitely conspiracy theories that evolve to serve a liberal agenda (9/11 trutherism was this for awhile, before it drifted rightward), but it's not a coincidence that they mostly exist to serve right wing agendas. After all, they allow someone an opportunity to express unsavory ideas---that black men cannot be Presidents, that common men cannot be great poets, that your child is too precious for common folk behaviors like vaccination---without coming right out and saying that. Which is all the more reason I find it baffling that people who imagine themselves to be skeptics would so often hand wave away the idea that skepticism should have a political angle to it. Why refuse to understand the people you set out to debunk?

*This is sarcasm, truthers.