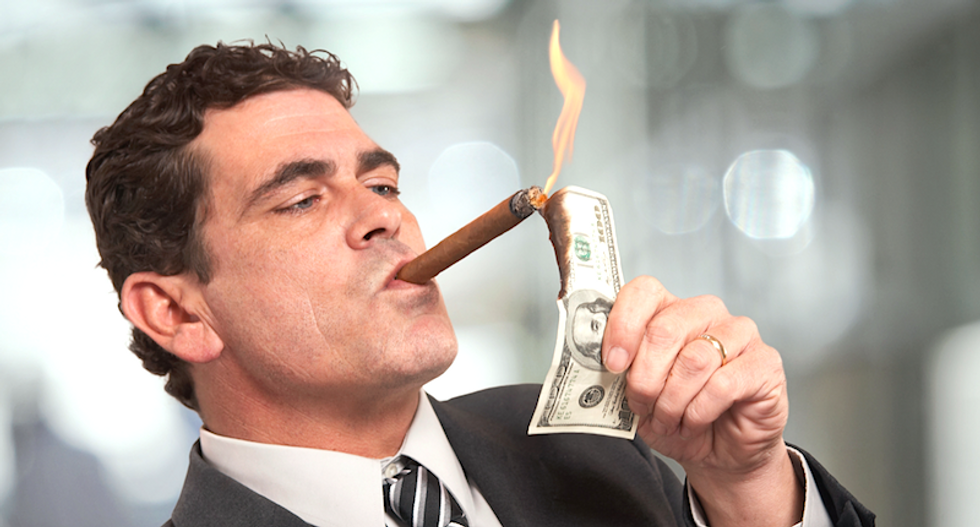 Wealth and income inequality have many causes, and it’s pretty much beyond dispute that any well-functioning capitalist society will have some degree of disparity between the richest and the poorest.

It’s also beyond dispute that we are approaching a social consensus that wealth and income inequality in the United States today now threatens to seriously damage our social fabric. That fabric is grounded in two fundamental ideas: liberty, or the freedom to determine our own destinies, and equality. The problem is that over the past thirty years – in tandem with rising inequality – we have favored liberty over equality.

Our emphasis on liberty has helped to create what I call an empathy gap, which in turn has permitted the creation of a selfishness surplus, which I will explain below.

David Hume and Adam Smith understood this phenomenon well. He argued that our moral compass comes from our ability to identify with others – our empathy. We understand intuitively that, because others are like us, they suffer similar pains and enjoy similar pleasures. So far, so good.

The problem – the disconnect if you will – is that those similarities sometimes are superficial. The working poor may look like the more advantaged – they have jobs, houses, cars, etc. But the truth is that they live on the margins of financial disaster. Because they look like the advantaged, the latter assume that the working poor are just like them in all relevant respects – except for hard work. Superficial similarity allows the rich and powerful to assume their success is simply a result of working harder because in their minds it’s clear that the poor could be just like them; they’re just lazier or failed to develop the same skills.

The reality is different. The working poor are not like the advantaged, superficial similarities aside. A very significant component of success – one that may even be more determinative than hard work – is luck. This is true, even if the advantaged have worked hard to maximize the benefits of that luck. By luck I mostly mean circumstances of birth and natural talents and abilities (which might well include the propensity to work hard).

Ironically, our ability to identify with others because of our essential similarities leads to a singular lack of empathy by the advantaged. Because the disadvantaged look like us, despite very real differences, we conclude that their disadvantage is their own fault. We believe that the disadvantaged would succeed, just like us, if only they would work harder. We conclude, in effect, that they have freely chosen not to succeed. This is, for the most part, untrue.

Fairness is no longer fair

The second problem is with our laws. Many of our laws take some idea of fairness as their starting point, following Aristotle. We see justice as some notion of fairness in terms of how opportunities are distributed. Our sense of what is fair is structural or procedural, assuming that everyone has access to the same resources or jobs and the individual freedom to pursue them.

But we can’t, or won’t, say that fairness embraces a particular way to ensure economic goods are distributed evenly or adheres to some collective concept of social purpose. Constitutional due process, for example, attempts to balance the power of the state with the rights of an individual in a formal and structural way but without detailing how it should work in practice. The focus is on the system not the outcome.

As any lawyer or economist can tell you, when you focus on structure or process, the result is typically the status quo. Thus if we start with inequality, we end with inequality. We mean well, or so I hope. But it usually doesn’t work, at least if social mobility is our goal. And the apparent successes, such as due process in the 19th century, are few and far between and even today haven’t entirely achieved their aims.

The wealthy’s surplus of selfishness

Combine the empathy gap with structural and procedural fairness and you get what I call the selfishness surplus. That surplus is the excess awarded to the rich and powerful over and above what they would have gotten if the resources in our society had been distributed more fairly and if our laws had been more redistributive in terms of fairness. As I explain in detail elsewhere, this surplus is real and empirically identifiable.

Why do the disadvantaged tolerate this situation? The American myth of self-reliance. No matter the vagaries of fortune, we consistently find that Americans at all levels believe in some variant of the Horatio Alger myth – the classic American rags to riches success story – despite strong empirical evidence that belies it. I think that there is some evidence in recent years that belief in this myth is eroding, a fact that will be dangerous for society if the the system continues as it currently is now.