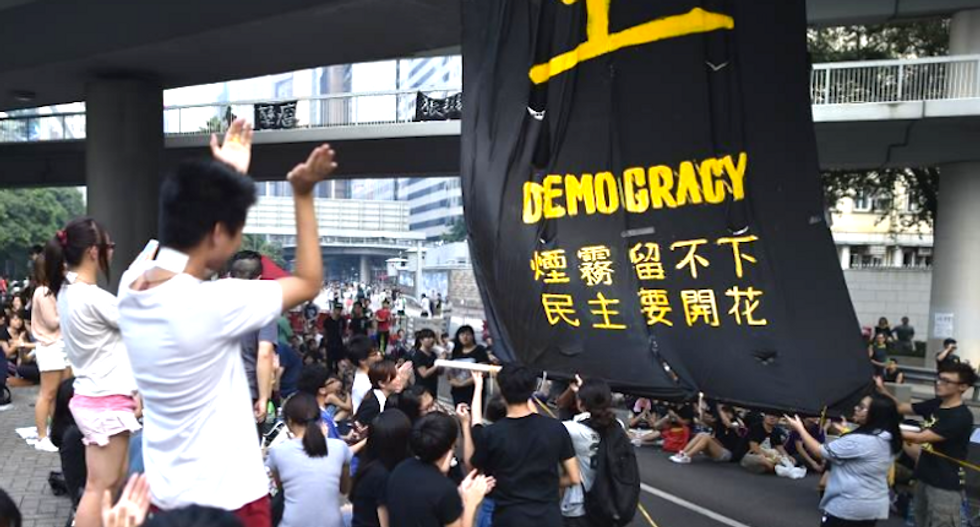 After one of the most violent nights since pro-democracy protests began in Hong Kong, the city should brace for further clashes, analysts said Monday, as frustration grows at a lack of government compromise.

Now entering their third month, the mass protests have been largely peaceful, but demonstrators say they are being forced to take more radical action as their pleas for political reform have fallen on deaf ears.

"History tells us that peaceful protests turn radical and violent over a period of time when the government either ignores political problems or responds to them with suppression and violence," said Surya Deva, a law professor at City University of Hong Kong.

"The current 'umbrella movement' reaffirms this."

Protesters want fully free leadership elections in 2017, but Beijing has said that all candidates must be vetted by a loyalist committee.

Hundreds clashed with police as they tried to storm government headquarters late Sunday in chaotic scenes that left dozens injured.

Crowds wearing helmets and carrying handmade shields and umbrellas were beaten back after they surged onto a major road near the government complex.

Hours after Sunday's clashes, Leung said the occupy movement would be "in vain".

The Hong Kong government is due to launch a second round of public consultation on how the city's next leader is elected -- an opportunity to appease protesters.

"If the second consultation actually starts off with more conciliatory models being proposed, then things might settle a bit," said Michael DeGolyer, a professor at Hong Kong Baptist University.

"A hardline consultation document and things will get very ugly, though."

Protesters said Monday that they were reluctant to become more aggressive -- but some felt they had no other choice.

"There needs to be an escalation and I don't see any way unless we resort to violence, but we are hesitant," said Au Fung, 32, who works in sales but has been camping out in Admiralty for the last six weeks.

"We are still very constrained when responding to police. We are passively defending, but the police are kind of provoking (us)," he added.

Pro-democracy rallies drew tens of thousands of people at times in the first weeks of protest, but the numbers have dwindled as the movement's leaders struggle to keep up momentum.

However, although there is little hope of concessions over reform, protesters are reluctant to leave the protest sites empty handed.

"It's hard to deny that it's getting more violent. But it's the police -- they are quite irrational in facing the protesters and if we don't face the police we will get nothing," said secondary school student Nicole, 17.

"What we want can't be achieved by just sitting here."

Deva said the ball is now in Beijing's court, with continued intransigence a risk to China's domestic and international political goals.

"Unless Beijing makes some real concessions, it will continue to be very difficult to govern Hong Kong," he said.

But DeGolyer said a climbdown was unlikely.

"Beijing is clearly not going to change its mind," he said.