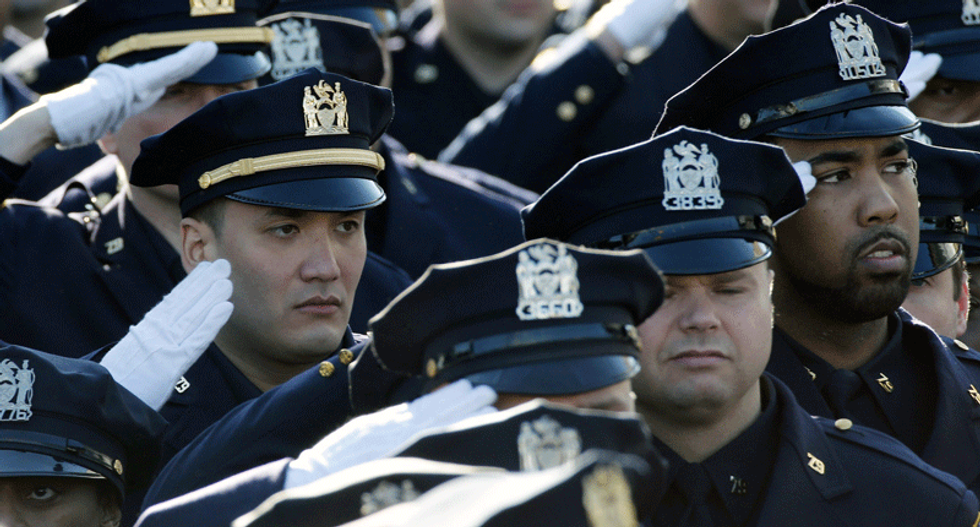 Police salute during the playing of the U.S. National Anthem outside the Christ Tabernacle Church at the start of the funeral service for slain New York Police Department (NYPD) officer Rafael Ramos in the Queens borough of New York December 27, 2014. (REUTERS/Mike Segar)

Tens of thousands of police and other mourners filled a New York City church and nearby streets for the funeral on Saturday of one of two police officers shot dead by a man who said he was avenging the killing of unarmed black men by police.

Singled out for their uniforms, the deaths of Rafael Ramos and his patrol partner Wenjian Liu have become a nationwide rallying point for police and supporters, beleaguered by months of street protests accusing police of racist practices.

"Your husband, and his partner, they were a part of New York's finest, and that's not an idle phrase," U.S. Vice President Joe Biden said, addressing Ramos's widow, Maritza, over his coffin, bathed in blue light.

"I believe that this great police force of this incredibly diverse city can and will show the nation how to bridge any divide. You've done it before and you will do it again."

Police department chief spokesman Stephen Davis said Ramos's funeral might prove the largest in the history of the force. Streets outside the church were filled for blocks with neat, quiet crowds of officers in blue uniform, including force delegations from Boston, Atlanta, St. Louis and New Orleans.

The service at Christ Tabernacle Church in Ramos's Queens neighborhood also brought together Mayor Bill de Blasio and the police officers and union leaders for the first time in public since an extraordinary confrontation a week ago at the hospital where Ramos and Liu were pronounced dead.

Hours after Ramos, 40, and Liu, 32, were slain while sitting in their parked patrol car in Brooklyn on Dec. 20, police officers, in an unusually pointed display of disgust, turned their backs to the mayor as he arrived at the hospital.

Marking the most toxic relations in decades between a New York City mayor and his police department, union leaders, enraged by his expressions of support for the protests against police practices, said the mayor had "blood on his hands".

On Saturday, as de Blasio began speaking at the funeral, thousands of police officers in at least one part of the crowd outside all turned their backs to a large projection screen.

"He had a dream that he would one day be a police officer," de Blasio said of Ramos, who joined the police department relatively late in his working life after a career as a school safety officer. "He couldn't wait to put on that uniform. He believed in protecting others and those who are called to protect others are a special breed."

New York Governor Andrew Cuomo spoke about how Liu and Ramos represented the diversity of the city's police department, which has officers of more than 50 nationalities speaking 64 languages, he said.

The officers' killer, Ismaaiyl Brinsley, 28, fatally shot himself soon after the attack, and had earlier the same day shot and wounded his former girlfriend in Baltimore.

Relatives and close friends of Ramos recalled him as a man devoted to his church and to calling the people he loved frequently just to see how they were doing.

"Dad, I'll miss you with every fiber of my being," his son Justin said at Friday's memorial service.

A regular face as an usher at Christ Tabernacle, Ramos was studying to become a police chaplain.

Brinsley, who was black, had written online that he wanted to kill police officers to avenge the deaths of Eric Garner and Michael Brown - unarmed black men killed by white policemen in New York and Ferguson, Missouri.

Their deaths and the decisions not to prosecute the officers responsible ignited nationwide protests, renewing a debate about race in America that has drawn in President Barack Obama.