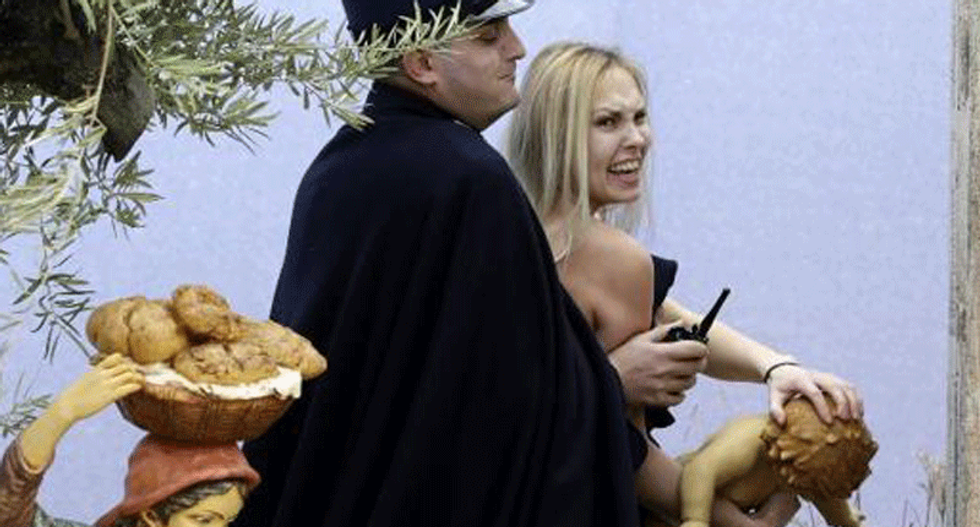 A Femen activist is arrested by Vatican police as she stages a protest inside the Vatican crib in St.Peter's square on December 25, 2014 (AFP)

An activist from the feminist group Femen bared her breasts in St Peter's Square on Christmas Day and rushed the Nativity scene, grabbing the Baby Jesus figurine.

A Vatican police officer wearing a black cape was quick to arrest the blonde activist and wrest the figurine away from her.

The words "God Is Woman" were daubed in large letters on her chest.

Although the incident occurred well after Pope Francis delivered his Christmas message from the balcony of St Peter's Basilica, thousands of pilgrims were still in the famous square.

Femen has staged similar stunts at the Vatican, such as a protest last month over an imminent visit by the pope to the European Parliament.

The three Femen members were wearing only leather mini-skirts and flower garlands in their hair, and one had the slogan "Pope is not a politician" emblazoned across her chest.

On November 24, the day before the pope's visit, a topless Femen activist mounted the altar of the Strasbourg cathedral.

The movement that began in Ukraine to protest the former pro-Kremlin regime also opposes the Catholic Church's positions against abortion and gay marriage.

Their activists often stage protests in places of worship.