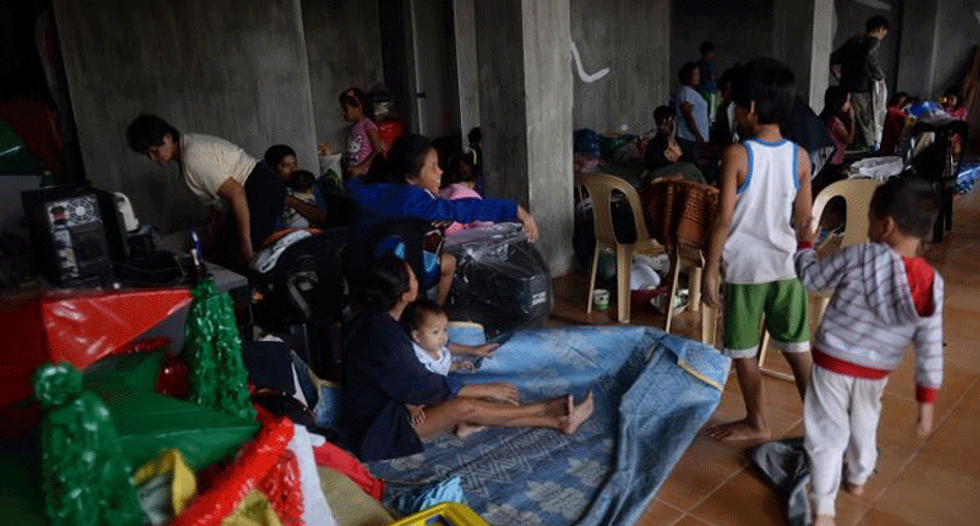 The typhoon roared in from the Pacific Ocean and into remote fishing communities on Samar island on Saturday night with wind gusts of 210 kilometres (130 miles) an hour, local weather agency Pagasa said.

The wind strength at landfall made Hagupit the most powerful storm to hit the Philippines this year, exceeding a typhoon in July that killed more than 100 people.

"Many houses, especially in the coastal areas, were blown away by strong winds," Stephanie Uy-Tan, the mayor of Catbalogan, a city on Samar, told AFP by phone on Sunday morning.

"Trees and power lines were toppled, tin roofs were blown off and there is flooding."

Fearful of a repeat of last year when Super Typhoon Haiyan claimed more than 7,350 lives, the government undertook a massive evacuation effort ahead of Hagupit that saw millions of people seek shelter.

There were no confirmed casualties as of 4:00 pm (0800 GMT), authorities in Manila said.

However Hagupit was forecast to take three days to cut across the Philippines, passing over mostly poor central regions, and authorities were still preparing for worst-case scenarios.

The government warned of storm surges up to five metres (16 feet) high in some areas, flash flooding, landslides and winds strong enough to tear apart even sturdy homes.

In the capital Manila which has a population of 12 million, authorities cancelled classes for the start of the week amid forecasts of heavy rain across the city on Monday.

Tens of millions of others live in the typhoon's path, including those in the central Philippines who are still struggling to recover from the devastation of Haiyan, which hit 13 months ago.

Haiyan was the strongest storm ever recorded on land, with winds of 315 kilometres an hour. It generated tsunami-like storm surges that ravaged entire towns.

In Tacloban, one of the cities worst-hit by Haiyan, palm-thatch temporary houses built by aid agencies for survivors of last year's typhoon had been torn apart, vice mayor Jerry Yaokasin told AFP.

However there was no repeat of the storm surges that did the most damage during Haiyan, known locally as Yolanda.

"There is a collective sigh of relief. The initial assessment is that there are no casualties. We were better prepared after Yolanda, up to 50,000 people were packed in evacuation centres," Yaokasin said.

"But the transitional shelters made of nipa (palm thatch) were blown away. Our biggest challenge is how to provide for those who were displaced because of that."

In the eastern region of Bicol that was due to be hit throughout Sunday and Monday, hundreds of thousands were huddling in schools, churches and other official evacuation centres.

In Legaspi, a major city in Bicol, ocean sprays more than one-metre high crashed above the city's seawall and fierce winds roared on Sunday morning, ahead of the main typhoon front.

"We're terrified the water will rise up. This is the nearest safe place, so we came here," Karen Baraham, an ice cream vendor who lives in a creekside slum, told AFP as she sought shelter in a politician's three-storey office.

The Philippines endures about 20 major storms a year which, along with regular earthquakes and volcano eruptions, make it one of the world's most disaster-plagued countries.

The storms regularly claim many lives and are becoming more violent and unpredictable because of climate change, according to the United Nations and many scientists.

At global climate talks in Peru, Filipino activists said the frequency of typhoons had settled any debate in the Philippines about whether man-made global warming exists.

"In the hour of our peril, now is the time for politicians to back up their expressions of solidarity with real action at the UN climate talks," said Jasper Inventor of Greenpeace. "It has become an issue of our survival."

In 2011 and 2012, there were consecutive December storms in the Philippines that together claimed more than 3,000 lives and were the world's deadliest natural disasters of those years.

Thousands of people attended an annual anti-abortion rally Friday with their hopes raised this year that the conservative-majority Supreme Court will overturn the landmark ruling that legalized abortion in the United States 50 years ago.

"We are hoping and praying that this year 2022 will bring a historic change for life," said Jeanne Mancini, president of the March for Life.