U.S. imposes new sanctions against Russia ahead of peace talks with Ukraine 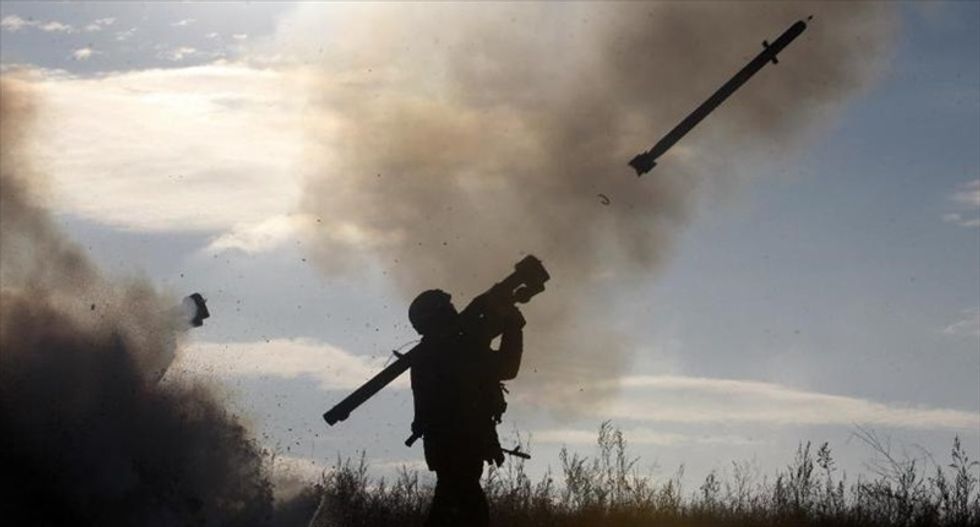 A Ukrainian soldier fires a missile with a portable air-defense system during exercises near the city of Shchastya on Dec. 1, 2014. Photo by Anatolii Stenapov for Agence France-Presse.

The United States imposed sanctions Friday on Russian-controlled Crimea as Ukraine announced the loss of five soldiers ahead of peace talks meant to end a war against Russian-backed insurgents.

"The United States will not accept Russia's occupation and attempted annexation of Crimea," Obama said in a statement.

Similar measures were imposed Thursday by the European Union as the West attempted to ratchet up pressure on Moscow over its seizure of Crimea and support for a rebellion by pro-Russian militants in eastern Ukraine.

Canada also added new sanctions Friday, targeting separatist leaders and the oil and gas sector in Russia, where the government is battling a currency crash and economic crisis.

Earlier, Russian Foreign Minister Sergei Lavrov warned that threatened US sanctions "could undermine the possibility of normal cooperation between our countries for a long time."

The united Western pressure came as Ukraine and the rebels prepared for talks meant to put a stalled peace process back in motion.

However, Ukraine's military reported losing five soldiers on Friday, the highest toll since Kiev and the Russian-backed militias struck a December 9 truce designed to reinforce a tenuous September agreement.

The next stage is meant to be comprehensive negotiations.

Ukranian President Petro Poroshenko hoped to start these on Sunday, with the help of European and Russian envoys in the Belarussian capital Minsk. But a top rebel said the insurgents would only be ready by Monday.

"We agreed the general list of issues we need to discuss," rebel negotiator Vladislav Deynego told AFP by telephone. "But we still have no Minsk date."

German Chancellor Angela Merkel and French President Francois Hollande were due this weekend to impress the importance of an immediate meeting during their third joint call to Russia's Vladimir Putin and Poroshenko in the past few days.

The scale of the fighting has subsided with the onset of winter and heavy snows that make progress across the war-scarred fields and muddied roads all but impossible.

All sides are now busy looking for ways to ensure that millions of civilians who have been unable to flee the artillery shelling and rocket fire make it safely through the winter in apartments with little to no water or heat.

The United Nations believes the daily battles have killed more than 4,700 people and driven nearly a million from their homes.

Its children's fund UNICEF said on Friday that "tens of thousands" of youth still lived in areas engulfed by violence.

"The situation for more than 1.7 million children affected by the conflict remains extremely serious," the UN Children's Rights and Emergency Relief Organisation said.

Any peace agreement is likely to include a requirement for fighters on both sides to let through humanitarian convoys they fear may be used to smuggle in weapons to their adversaries.

German Foreign Minister Frank-Walter Steinmeier said it was essential for the Minsk negotiators to establish a buffer zone that sets the initial boundaries of areas overseen by the rebels within a unified Ukraine.

Steinmeier added after talks in Kiev with Poroshenko and Prime Minister Arseniy Yatsenyuk that the sides must also agree to swap their remaining prisoners and "resolve humanitarian relief issues".

Although Russia is under growing financial pressure because of the sanctions and low oil prices, Ukraine's situation is even more dire.

Standard & Poors lowered its credit rating for Ukraine on Friday to CCC- with a negative outlook, warning that dangerously low foreign currency reserves could prompt a default within months.

"The negative outlook reflects our view of the increasing risk that, without additional financial support, Ukraine may default on its obligations," the credit rating agency said.