Unruly Virginia 4-year-old handcuffed, shackled and hauled off to sheriff's office by the cops 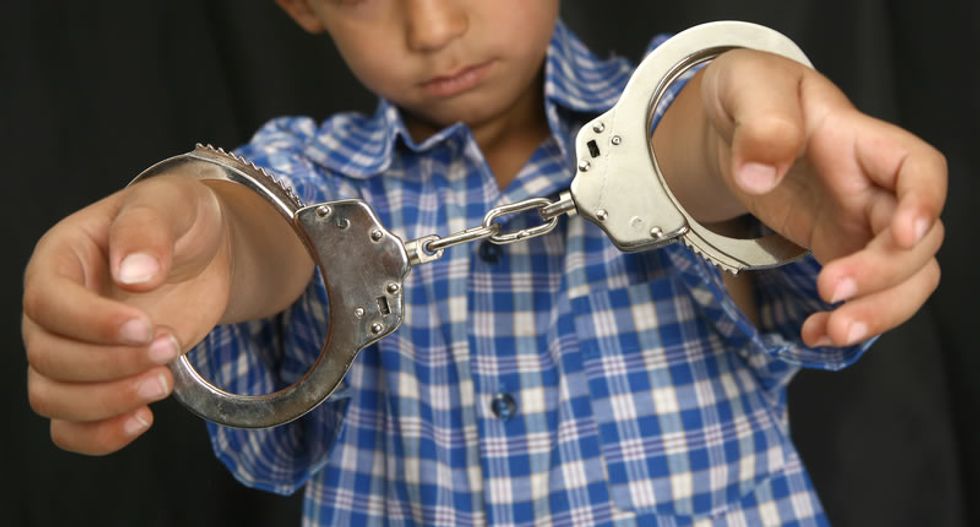 A four-year-old Virginia boy with attention deficit disorder (ADD) was handcuffed and shackled, then taken away in a squad car after his teacher and principal were unable to calm him down, WVTF reports.

According to officials at the Nathanael Greene Primary School, on the day in question the pre-kindergarten student had thrown blocks, climbed on and over desk, and scratched and kicked both the principal and the director of special education.

"The boy was out of control, basically, throwing his arms around and kicking-- trying to kick the deputy, trying to run away, and the deputy felt that putting the handcuffs on him was for his safety as well as everybody else's," County Sheriff Steven Smith said.

"Once he got inside the office," the sheriff added, "since he tried to run and kick the deputies, they took the handcuffs off him and put the leg shackles on him."

The boy's mother, Tracy Wood, was appalled at the way in which the school officials allowed her son to be treated.

"When you call a parent to get their child, when they get to the school, you expect the child to be there," she said, "especially when you arrive in a timely manner."

Instead, she was greeted by the principal, who informed her that her shackled 4-year-old had been transported to the sheriff's office.

According to child psychologist Jeffrey Fracher, the use of shackles on a child that young could have a long-term effect on his psychological well-being.

"I can't imagine any scenario where it would be appropriate to handcuff a child that young," he told TVTF. "What we know about childhood development and psychological development suggests that could also be highly traumatizing to a child."

The boy's mother says that is exactly what has happened. Her son, who was suspended indefinitely after the incident, suffers from nightmares as a result of his first brush law enforcement.