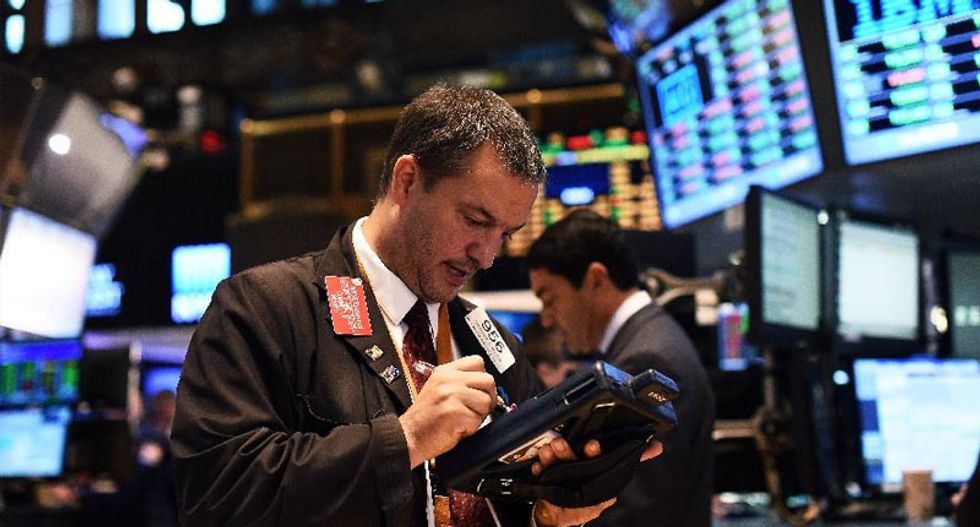 The Dow stock index climbed above 18,000 for the first time ever Tuesday after government data estimated third-quarter US economic growth at a spectacular five percent.

The blue-chip index crossed its latest threshold within moments of the market opening, continuing a so-called "Santa Claus rally" that began after last week's US Federal Reserve meeting.

At five percent, US growth for the third quarter was the best since 2003. The figure, described as "mind-blowing" by one analyst, was also better than the 3.9 percent previously estimated by the government and the 4.3 percent projected by analysts.

Spending for consumption rose 3.2 percent, the biggest jump since the end of 2013. Analysts also cited strong growth in defense spending and exports.

The US growth figures showed "an economy firing on all cylinders for the first time in many quarters," said Chris Low, chief economist at FTN Financial.

However, the good cheer was offset somewhat by US durable goods orders -- an indicator of business investment -- which fell 0.7 percent in November.

Low said the durable goods orders implies that fourth-quarter capital spending will decline, perhaps sharply, "suggesting blockbuster growth in the third quarter will be followed by a distinctly slower Q4."

The Dow was on track Tuesday to close at a fresh record for the 36th time in 2014, according to S&P Dow Jones Indices.

The latest spate of equity records follow Wednesday's Fed meeting, at which the US central bank kept interest rates low, gave a fairly upbeat assessment of the economy and said it would be "patient" before raising rates.

US stocks could climb higher still in the coming days as money managers who are under-invested in equities look to capitalize on the positive sentiment, said Mace Blicksilver, director of Marblehead Asset Management.

He also cited a paucity of sellers given the holiday shopping season.

"I don't see anything to change the momentum of the market between now and year end," Blicksilver said.

The outstanding US growth figures comes on the heels of strong US labor and retail sales reports for November.

The latest US data bolsters the sense of advantage for the giant economy as Europe and Japan struggle to attain growth and growth slows in China and other emerging powers.

Adding to the momentum in the US has been a precipitous fall in gasoline prices, seen as a de facto tax cut for consumers.

US gasoline prices are now $2.38 for a gallon of regulator, off about 27 percent from the year-ago level.

However, analysts cite some headwinds for the US economy heading into 2015, including a hit if major its trading partners continue to stagnate and the dollar remains strong.

Other unknowns relate to the implications of a crashing Russian ruble and of a huge drop in oil prices that weighs on US energy investment and the economic prospects of oil-exporting nations.

Most of all, market watchers say US stocks could stumble once the US Fed finally does begin to raise interest rates, as it is expected to do in the middle of 2015.