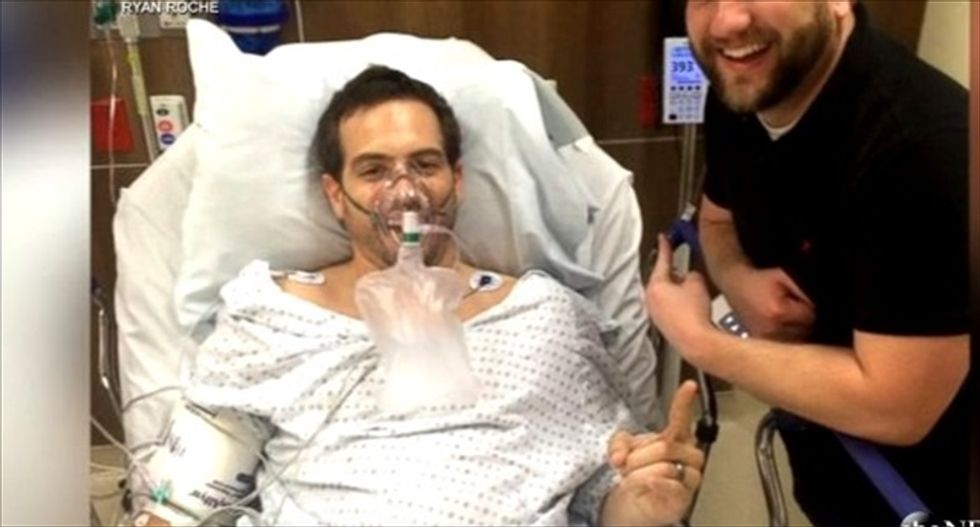 A Utah man's efforts to win a steakhouse dinner also led to him being hospitalized after he nearly "dry-drowned" himself trying to win an eggnog-chugging contest at his office holiday party.

"I was pretty much shaking uncontrollably," Ryan Roche told KLS-TV. "I couldn't control my body, I was shaking so bad, I was extremely nauseous, and my breathing became a pant."

Video taken at the party shows Roche guzzling down a quart of eggnog while competing with two co-workers for a gift card to Ruth's Chris Steak House. Roche finished his drink in 12 seconds, beating the previous record-holder by 10 seconds.

"I just opened up my throat, didn't even swallow," Roche said. "I pretty much poured it down."

Dry-drowning, also known as secondary drowning, occurs when a person's lungs become overloaded with liquid, causing the larynx to spasm and close up. The process then compromises the body's attempts to breathe normally. As USA Today reported earlier this year, secondary drowning accounts for 1 to 2 percent of drowning fatalities.

A friend of Roche's recognized his condition while visiting him after the party, and took him to seek medical attention. He said he spent three days in the hospital and took another week to regain his strength.

"People are emailing me pictures of eggnog. It never gets old," he told ABC News. "I'm pretty competitive but, unfortunately, in this situation it got the best of me."

Watch ABC News' report on the aftermath of Roche's win, as posted on Tuesday, below.