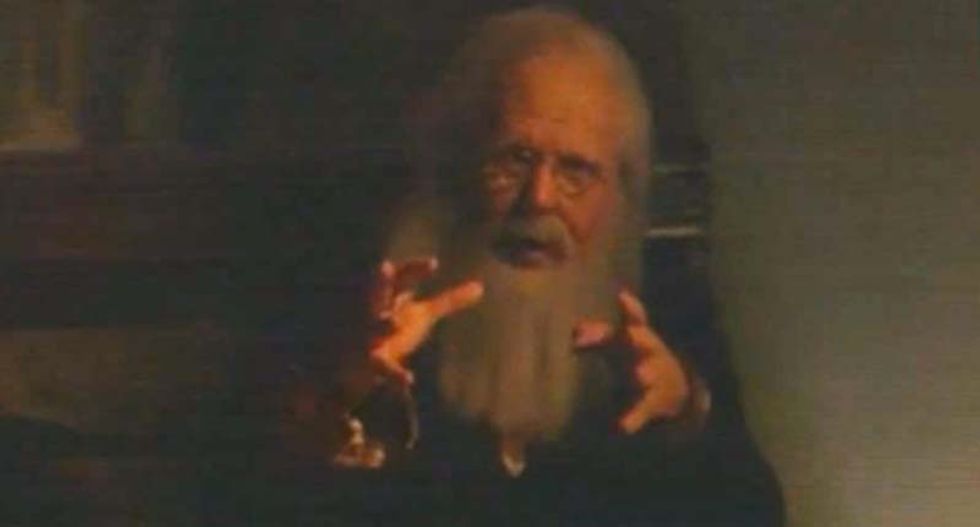 For an end-of-year recap, Glenn Beck premiered a video of himself 40 years in the future, affirming that 2014 Glenn Beck was right about America going to hell in a hand-basket.

An excerpt of the video, shown on Beck's own network and captured by Right Wing Watch, shows an aged and bearded Beck lamenting the decline of civilization, saying of 2014: "We all went dead inside."

"In 2014 things began to accelerate," the older and wiser Beck explains."The people ...changed. I don't know if it was fear or ignorance. I suppose it doesn't matter now but we all went dead inside. We all went numb. We all stopped seeing."

Beck tells viewers in the future, living in a darkened candle-lit world yet somehow able to view the video, "You can be great again."

"Believe it. I have seen it. I have seen it with my own eyes," he claims, his voice rising. "What the individual is capable of. Both the miraculous and the terrifying," he adds while showing video of a war vet returning home to a delighted woman and news footage announcing the disappearance of Malaysian Airline 370.

"Forty years ago, 2014, your history books proclaimed that was the year of the dawn of progressivism, the dawn of a new beginning. The end of capitalism, I'll tell you now, it was that. That this new era of equality and diversity and tolerance ... I beg to differ with your history book!" the nonagenarian Beck exclaims.

Using video of the standoff at the Bundy Ranch, Beck explains, "There was a clash of the evil Tea Partiers. There was a clash on a ranch in the middle of the country. A man said he had a right to his own land."

Turning to clips of his younger self, 2014 Beck explains, "Game time. Everything I've been talking about is on. Now it begins. And so it begins," emphasizing the last four words.