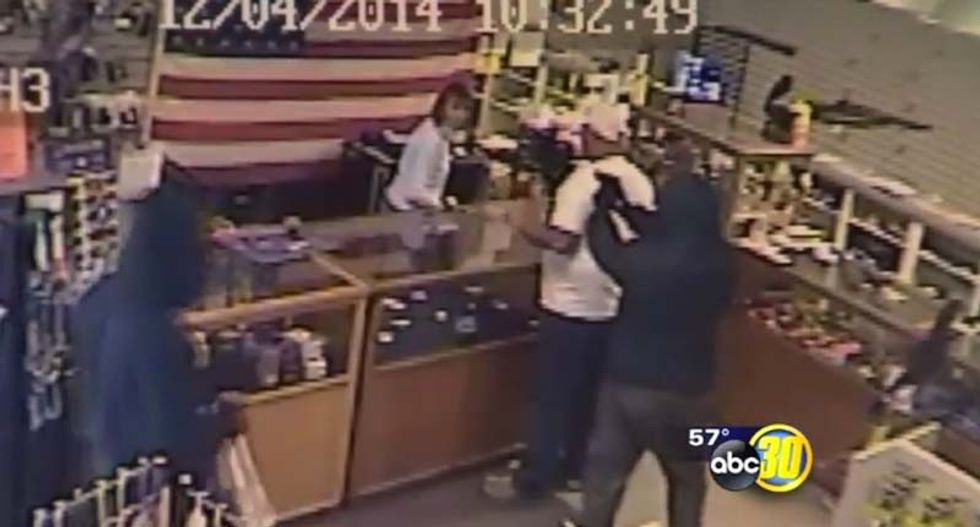 In footage captured by a surveillance camera, two armed robbers can be seen holding up a Fresno gun shop early Thursday morning, escaping with thirteen handguns stuffed into a pillowcase.

ABC30 Action News reports Fresno Firearms owner Marylyn Panek had just opened her store Thursday morning when the two robbers entered wearing masks and holding handguns, surprising the woman and one customer already in the store. After forcing the two to the ground, the robbers loaded thirteen handguns valued at $8,000 into the pillowcase.

According to police, as the men attempted to leave the store, they encountered a neighboring store owner delivering coffee to the gun store as he does every morning. Police say one of the robbers shoved the man, identified as 85-year-old George “Georgio” Sheklian, backwards onto the ground where he struck his head.

Police say Sheklian lay bleeding on the ground for 15 to 20 minutes before an ambulance arrived to take the unconscious man to a local hospital where he was rushed into surgery to reduce swelling of his brain.

Friday afternoon Sheklian remained unconscious and in critical condition said his son, Arsen Sheklian, who added that doctors have told the family the elderly man might not survive.

“Why did they do that to him?” Panek said referring to the robbers. “He had nothing to do with this.”

Fresno Police Lt. Jon Papaleo, explained that  the elderly man owns a neighboring shoe repair shop "...  just happened to be unfortunately walking in when the suspects were running out."

Police are currently searching for the two men who reportedly fled the scene in what was described by witnesses as "a late model white Cadillac."

Fresno officers are already searching for a man who stole a handgun from the same store last Saturday, running out with it after the owner showed it to him. Investigators are not sure if that theft is related.

Due to the stolen handguns, the ATF is assisting Fresno police in their investigation.

A reward is also being offered to help catch the men who robbed that store and put the elderly Sheklian into the hospital.